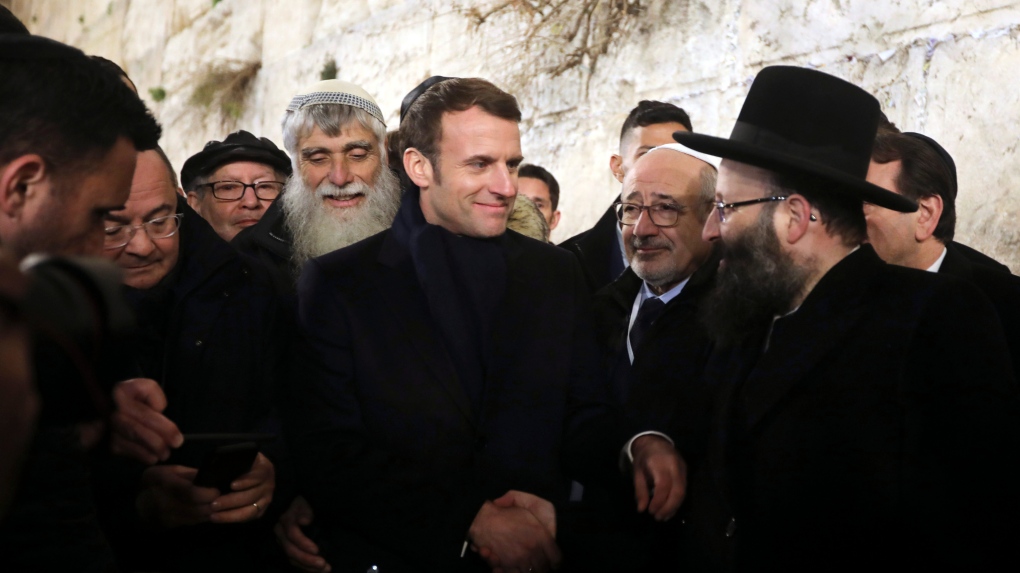 JERUSALEM -- Dozens of world leaders gathered Thursday in Jerusalem for the largest-ever gathering focused on commemorating the Holocaust and combating rising modern-day anti-Semitism -- a politically charged event that has been clouded by rival national interpretations of the genocide.

Russian President Vladimir Putin, French President Emmanuel Macron, Britain's Prince Charles, Vice-President Mike Pence and the presidents of Germany, Italy and Austria were among the more than 40 dignitaries attending the World Holocaust Forum, which coincides with the 75th anniversary of the liberation of the Auschwitz death camp.

The three-hour-long ceremony at Jerusalem's Yad Vashem Holocaust memorial -- called "Remembering the Holocaust: Fighting Antisemitism" -- looks to project a united front in commemorating the genocide of European Jewry amid a global spike in anti-Jewish violence.

But the unresolved remnants of World War II's politics have permeated the solemn assembly over the differing historical narratives of various players. Poland's president, who's been criticized for his own wartime revisionism, has boycotted the gathering since he wasn't invited to speak. Putin was granted a central role even as he leads a campaign to play down the Soviet Union's pre-war pact with the Nazis and shift responsibility for the war's outbreak on Poland, which was invaded in 1939 to start the fighting.

On the eve of the gathering, Israeli President Reuven Rivlin implored visiting dignitaries to "leave history for the historians."

"The role of political leaders, of all of us, is to shape the future," he said.

But Putin quickly ventured into the sensitive terrain shortly after his arrival Thursday, claiming that 40% of Jewish Holocaust victims were Soviet.

Of the 6 million Jews killed by the Nazis, historians say about 1 million were Soviet. Putin's controversial figure appears to include an additional 1.5 million Jewish victims from eastern European areas occupied by the Soviets under their pact with the Nazis.

"When it comes to the tragedy of the Holocaust, 40% of tortured and killed Jews were Soviet Union Jews. So this is our common tragedy in the fullest sense of the word," he said during a meeting with Rivlin.

Arkadi Zeltser, a Yad Vashem historian, said the accuracy of the statement depended on rival "definitions" of when the war began. Yad Vashem, along with all other reputable institutions, considers the war to have been sparked on Sept. 1, 1939 with the invasion of Poland. The Soviets generally consider their "Great Patriotic War" to have started two years later, when Germany invaded the Soviet Union.

It was the latest chapter in a bitter dispute over Soviet actions in the Second World War. Putin has been leading a campaign to downplay the Soviet Union's pre-war pact with the Nazis and focus instead on its role in defeating them.

Israel has appeared eager to oblige, giving Putin a fawning welcome and hosting him for the dedication of an imposing monument honouring the nearly 900-day Nazi siege of Leningrad. The city, now known as St. Petersburg, is Putin's hometown.

"We mustn't for even one second blur the sacrifice and the contribution of the former Soviet Union" in defeating "the Nazi monster," Prime Minister Benjamin Netanyahu said at the ceremony.

The forum at Yad Vashem marks one of the largest political gatherings in Israeli history, as a cascade of delegations including European presidents, prime ministers and royals, as well as American, Canadian and Australian representatives, arrived at Ben-Gurion Airport. More than 10,000 police officers were deployed in Jerusalem and major highways leading to it. Large parts of the city were shut down ahead of the event.

For Netanyahu it offered another opportunity to solidify Israel's diplomatic standing and boost his profile as he seeks re-election on March 2. He was hoping to use his meetings with world leaders to bolster his tough line toward Iran and rally opposition to a looming war crimes case against Israel in the International Criminal Court.

"I am concerned that we have yet to see a unified and resolute stance against the most anti-Semitic regime on the planet, a regime that openly seeks to develop nuclear weapons and annihilate the one and only Jewish state," he said of Iran. "For the Jewish people, Auschwitz is more than the ultimate symbol of evil. It is also the ultimate symbol of Jewish powerlessness. ... Today we have a voice, we have a land, and we have a shield."

For historians, though, the main message is one of education amid growing signs of ignorance and indifference to the Holocaust. A comprehensive survey released this week by the Claims Conference, a Jewish organization responsible for negotiating compensation for victims of Nazi persecution, found that most people in France did not know that 6 million Jews were killed during World War II. Among millennials, 45% said they were unaware of French collaboration with the Nazi regime and 25% said they weren't even sure they had heard of the Holocaust.

The World Holocaust Forum is the brainchild of Moshe Kantor, the president of the European Jewish Congress, an umbrella group representing Jewish communities across Europe. The group recently reported that 80% of European Jews feel unsafe in the continent.

Kantor established the World Holocaust Forum Foundation in 2005 and it has held forums before in Auschwitz, the killing fields of Babi Yar in Ukraine and at the former concentration camp Terezin. Thursday's event is the first time it is convening in Israel. The official commemoration marking the 75th anniversary of Auschwitz's liberation will be held next week at the site itself in southern Poland.

Organizers of the Jerusalem event have come under criticism for not including enough Holocaust survivors and instead focusing on the panoply of visiting dignitaries and the festival-like atmosphere surrounding it. In response, Ukrainian President Volodymyr Zelenskiy tweeted on Thursday that his delegation was giving up its seats to allow more survivors to attend.

Yad Vashem called the decision "odd" since about 100 survivors were expected to be among the 780 attendees and it was too late to make any adjustments in any case.

"It's a shame he took such a step," the memorial said in a statement.

The gathering comes amid an uptick in anti-Semitic violence. Tel Aviv University researchers reported last year that violent attacks against Jews grew significantly in 2018, with the largest reported number of Jews killed in anti-Semitic acts in decades. They recorded 400 cases, with the spike most dramatic in western Europe. In Germany, for instance, there was a 70% increase in anti-Semitic violence. In addition to the shooting attacks, assaults and vandalism, the research also noted increased anti-Semitic vitriol online and in newspapers, as extremist political parties grew in power in several countries, raising shock and concern among aging survivors.

"Anti-Semitism does not stop with the Jews," Rivlin said in the opening speech. "Anti-Semitism and racism are a malignant disease that destroyed and takes apart societies from within and no democracy is immune."