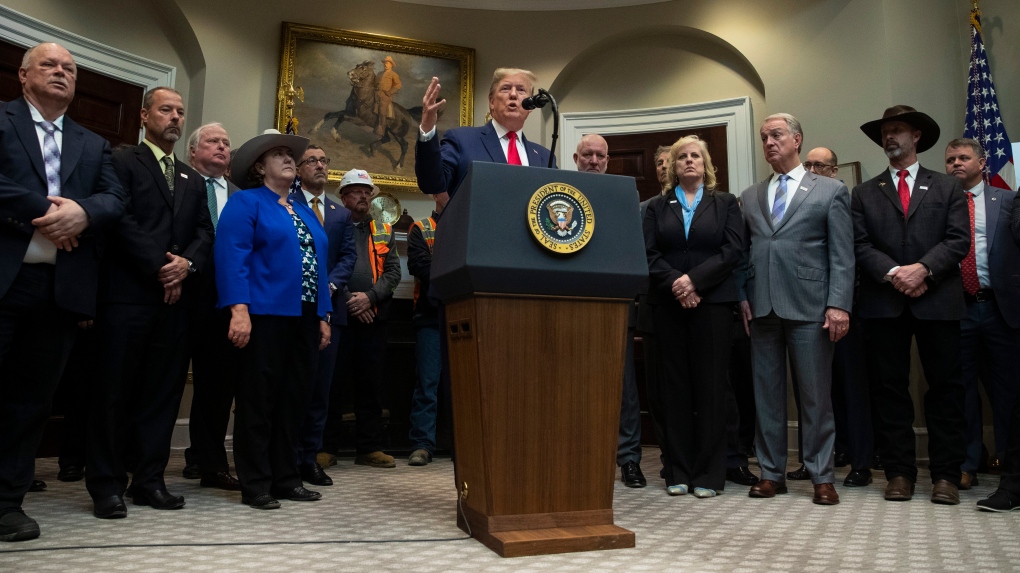 WASHINGTON -- Donald Trump, whose past as a New York real estate developer makes him no stranger to red tape, unveiled sweeping plans Thursday to overhaul the way the United States evaluates the environmental impact of major infrastructure and energy projects.

The U.S. president billed his proposed changes to the National Environmental Policy Act as a long-overdue effort to shorten and streamline a bureaucratic approval process emblematic of big government, while critics denounced it as written proof of how much contempt he holds for climate change.

"The United States will not be able to compete and prosper in the 21st century if we continue to allow a broken and outdated bureaucratic system hold us back from building what we need, the roads, the airports, the schools, everything," Trump told a news conference in the Roosevelt Room of the White House.

Approval processes that typically can take years or even decades would be shortened by 70 per cent, the president claimed.

Trump did not specifically mention the long-delayed Keystone XL pipeline, which has been in a state of suspended animation virtually since it was first proposed in 2008, thanks to repeated delays, disputes, protests and redos under then-president Barack Obama.

But if Trump's proposed changes come to pass -- and that's a big if, given the likelihood that environmental groups will go to court in an effort to block them -- could well pave the way for a contentious cross-border project that not even the president's own directives in 2017 and 2019 have so far been able to resuscitate.

Keystone XL won the approval of the Nebraska Supreme Court last summer, and has been the subject of often-contentious State Department hearings for yet another environmental review of the project. Officials with Calgary-based TC Energy, the project's owner, did not respond to media inquiries Thursday.

The 50-year-old National Environmental Policy Act was signed by Richard Nixon in 1970, pairing with the Clean Water Act and the Clean Air Act to form the country's first comprehensive bulwark against environmental degradation.

It requires federal agencies to take into account the environmental impact of potential projects and provides avenues for members of the public to provide their input.

Mary Neumayr, the chairwoman of Trump's Council on Environmental Quality, said the changes would establish a strict two-year time limit for environmental impact statements, tighten timelines, require increased co-ordination between federal agencies and make it easier for them to share documentation.

"The proposed rule would provide for a faster process while ensuring that agencies analyze and consider the environmental impacts proposed actions and reasonable alternatives to address significant impacts," Neumayr said.

The changes would also limit the scope of projects requiring environmental review to those that receive federal funding. Neumayr said they would not preclude agencies from taking into account a project's potential to impact U.S. fossil fuel output.

"Nothing in the proposal would eliminate the protections that Congress has enacted to safeguard our environment and the American people."

The proposal is "nothing more than an attempt to write Donald Trump's climate denial into official government policy," Sierra Club executive director Michael Brune said in a statement.

"Communities across the country are already feeling the effects of climate change, but rather than protect them, Trump is pulling out all the stops to silence their voices and further prop up his corporate polluter friends."

Some, like the Associated General Contractors of America, see the regulatory web woven by the U.S. law as a handy way for environmentalists and others to block development.

"It long ago stopped being about evaluating the environmental impacts of a proposed project, and has become a way for special interest groups to further their agenda by holding needed infrastructure and development projects hostage to countless lawsuits and delays," said Stephen Sandherr, the group's chief executive.