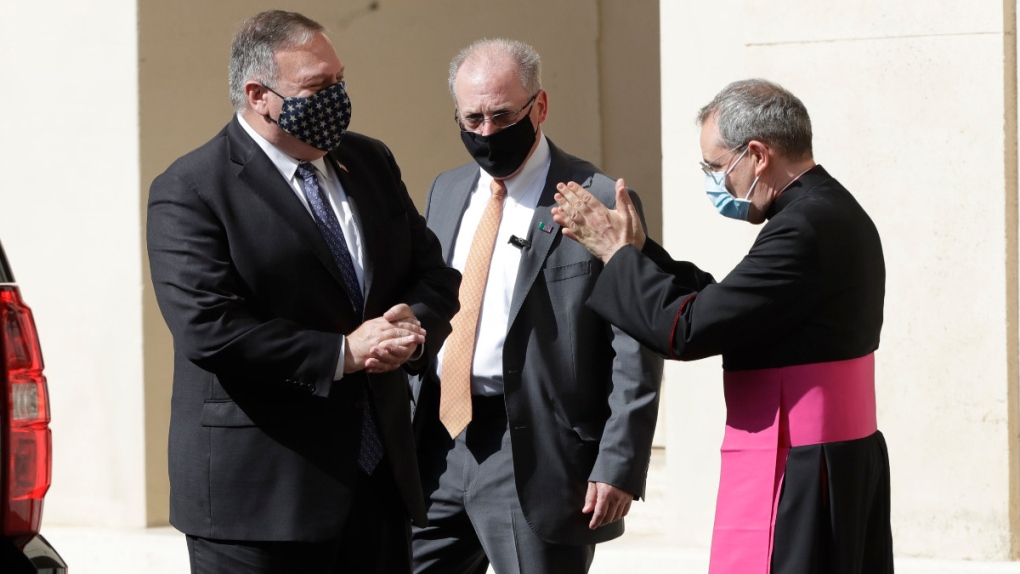 ROME -- U.S. Secretary of State Mike Pompeo and Vatican officials discussed their differences over China on Thursday, the Vatican said, a day after tensions over the Holy See's outreach to Beijing spilled out in public.

Vatican spokesman Matteo Bruni said both sides "presented their respective positions" about relations with China in a climate of "respect, openness and cordiality."

The State Department's deputy spokesperson, Cale Brown, said the men "discussed the importance of defending religious freedom and other human rights issues, and expressed particular concern about the situation in China."

Pope Francis declined to meet with Pompeo, to avoid any suggestion of political favouritism ahead of November's U.S. presidential election, Vatican officials said. Pompeo met with Francis last October, and it would have been unusual for him to have gotten another audience so soon, even without an impending election.

Pompeo's visit got off on a sour note, as far as the Vatican was concerned, after he penned an essay last month for a conservative magazine suggesting that the Vatican had compromised its moral authority by signing the 2018 nominations agreement with Beijing.

His article greatly irritated the Vatican, which saw it as interference in the church's internal affairs for the sake of scoring domestic political points.

A State Department official, speaking to reporters on condition of anonymity, sought to tamp down the tensions Thursday, noting that the U.S. has good relations with many Catholic institutions, including charities.

Another U.S. official, similarly speaking on condition of anonymity due to being unauthorized to discuss the private conversation, also sought to smooth over the dispute, saying the Holy See had a history of promoting religious freedom.

"The Vatican's playing the long game when it comes to human rights and religious liberty," the official said.

"Tactical agreements and tactical differences will come and go," the official continued. "But the broader strategic vision, the United States and the Vatican, are in lockstep and have been for four generations and will be for generations to come."

Pompeo was in Rome to participate in a conference on religious freedom organized by the U.S. Embassy to the Holy See, and to meet with Italian and Vatican officials.

During the Wednesday conference, Pompeo urged the Holy See to join the United States in denouncing violations of religious freedom in China, part of the broader U.S. campaign to criticize Beijing's crackdown on religious and ethnic minorities.

Gallagher, the Vatican foreign minister, was in the audience at the time of his speech and didn't refer at all to China in his remarks.

The Vatican is seeking to extend its accord with China, which envisages a process of dialogue in selecting bishops. It signed it in 2018 in hopes it would help unite China's Catholics, who for seven decades have been split between those belonging to an official, state-sanctioned church and an underground church loyal to Rome.

The Vatican has defended the accord against criticism the pope sold out the underground faithful, saying the deal was necessary to prevent an even worse schism in the Chinese church.

The Vatican has rarely, if ever called out China for its crackdown on religious and ethnic minorities and other human rights abuses, and it has stayed mum during months of protests in Hong Kong. It similarly rarely criticizes Russia, for fear of harming relations with the Russian Orthodox Church.

Pompeo started his day Thursday visiting the Rome-based Sant'Egidio Community, a Catholic charity active in caring for refugees in Italy and providing HIV-AIDS care in Africa. Arriving at Sant'Egidio's headquarters, Pompeo praised the group's efforts as "the Lord's work."

'So much work to do': How Joe Biden is already planning for transition

How Trump plowed through US$1 billion, losing cash advantage