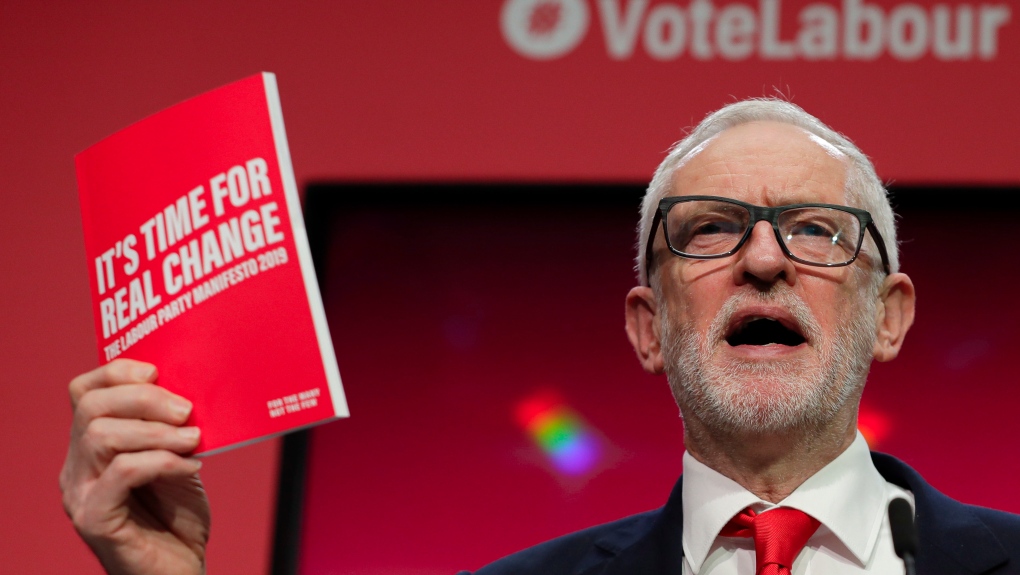 Prime Minister Boris Johnson pushed for Britain to hold the December election, which is taking place more than two years early, in hopes winning a majority and breaking Britain's political impasse over Brexit. All 650 seats in the House of Commons are up for grabs.

Labour's ambitious manifesto is an attempt to shift the focus of the campaign from Britain's stalled departure from the European Union and onto the country's fraying social fabric, stressed after a decade of austerity measures under Conservative-led governments.

The platform unveiled Thursday at a rally in Birmingham, central England, revives policies of nationalization and central government control that have been jettisoned by both Conservative and Labour governments since the 1980s.

"Yes, it is a radical manifesto," Corbyn said. "But when you travel around this country and you talk to people, radical answers are what's necessary."

The party has also promised to part-privatize telecoms provider BT and bring free broadband internet access to every home and business in Britain.

Labour's promises would be funded by raising taxes on the wealthy, including higher corporation tax, a windfall tax on oil and gas companies and an income tax increase for those earning more than 80,000 pounds ($104,000) a year.

Johnson's Conservatives accuse Labour of reckless spending and outmoded socialist ideas. But, in a major change of policy after years of public spending cuts, the Conservatives are also promising more money for infrastructure, health care and public services if they win.

Paul Johnson, who heads the Institute for Fiscal Studies, an economic think-tank , said the scale of Labour's financial promises was "colossal" and the plans to pay for it without raising taxes on most earners "simply not credible."

"But command and control isn't the way," he said. "Excessive intervention in business governance and sweeping tax rises would suppress innovation and smother growth."

Edwin Morgan, director of policy at the Institute of Directors, warned that "Labour's measures on business risk being too much stick and not enough carrot."

Corbyn said his policies would be popular with the public and compared himself to U.S. President Franklin D. Roosevelt, whose "New Deal" helped tackle the Great Depression. Corbyn said Roosevelt "had to take on the rich and powerful in America to do it."

"So I accept that the opposition and hostility of the rich and powerful is inevitable," he said.

"The billionaires and the super-rich, the tax dodgers, the bad bosses and the big polluters -- they own the Conservative Party," Corbyn added. "But they don't own us."

While Johnson's Conservatives have a lead in most opinion polls, analysts say the Dec. 12 election is unpredictable because the question of Brexit cuts across traditional party loyalties. For many voters, their identities as "leavers" or "remainers" are more important than party affiliations.

Johnson says if voters give the Conservatives a majority he will "get Brexit done" by getting Parliament to ratify his Brexit divorce deal and taking the U.K. out of the bloc by the current deadline of Jan. 31.

Labour says it will negotiate a better Brexit deal with the EU, then hold a new referendum offering voters a choice between leaving the EU on those terms or remaining. Corbyn, a long-time critic of the EU, has refused to say what side he would back in such a referendum.

"Let's take this out of the hands of politicians and give the British people the final say," he said.

Smaller parties in the race include the centrist, pro-EU Liberal Democrats, who want to cancel Brexit; the pro-independence Scottish National Party; the Brexit Party, which wants Britain to leave the EU without a divorce deal; and the environmentalist Greens.