U.K. Conservatives under fire for Twitter deception in debate 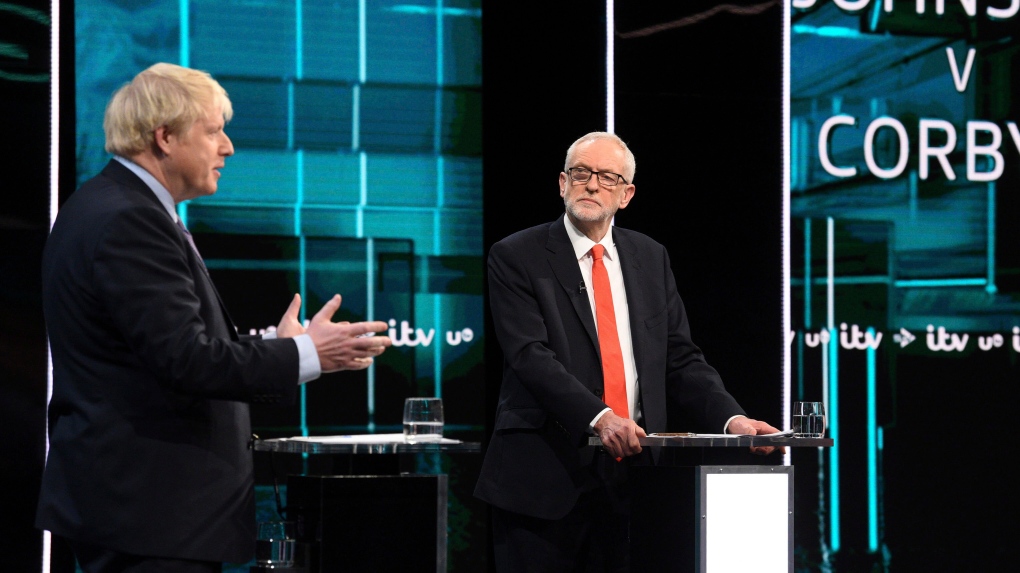 In this photo issued by ITV, Jeremy Corbyn, right, and Boris Johnson, during the election head-to-head debate live on TV, in Salford, Manchester, England, Tuesday, Nov. 19, 2019. (ITV via AP)

Rebranding its account to resemble a neutral fact-checker, complete with a big check mark, the party posted tweets supporting Prime Minister Boris Johnson during his debate with opposition Labour Party leader Jeremy Corbyn. It later reverted to the name "CCHQ Press" and restored the party logo to its profile.

"It was misleading and it was inappropriate," Will Moy, chief executive of the London-based fact-checking website Full Fact, told The Associated Press. "It's not what we can see a serious political party doing."

Foreign Secretary Dominic Raab defended the party's actions, saying the Twitter account was clearly linked to the Conservatives and asserting that voters would not be perturbed by "the social media cut and thrust."

"We make no apology for having an instant rebuttal to all the nonsense and lies put out," Raab told the BBC.

Twitter said in a statement that it had "global rules in place that prohibit behaviour that can mislead people." The company pledged to take "decisive corrective action" if there were any more attempts "to mislead people by editing verified profile information," but did not censure the Tories for their account switch.

The manipulation of the account during a high-profile event put the rise of digital campaigning squarely in the public eye. All political parties are devoting much of their campaign spending to the digital realm as they battle to win the U.K.'s Dec. 12 election, bypassing strict laws that govern communication on radio and television.

In a reflection of the confusion, the Electoral Commission, which regulates campaign finances, issued a statement warning that "voters are entitled to transparency and integrity from campaigners in the lead-up to an election." Critically, however, it pointed out that it doesn't have "a role in regulating election campaign content."

With the absence of law, campaigns have been pushing the boundaries to get attention.

The Conservative Party was embroiled in controversy earlier this month when it posted a video on social media containing a misleading edit of a television interview with senior Labour figure Keir Starmer. The video had been altered to show Starmer failing to answer a question about Brexit when, in fact, he responded quickly. The Conservative Party chairman described the doctored video as lighthearted satire.

The Conservative Party is trying to raise its online game in this election after being outperformed by Labour during the last campaign in 2017, when the opposition party exceeded expectations and the Tories stumbled.

The Conservatives have hired New Zealanders Sean Topham and Ben Guerin to oversee digital strategy and Australian Isaac Levido as overall campaign director. All three have worked with Lynton Crosby, an Australian political strategist who has long ties with the U.K. Conservatives.

The trio have been credited with helping Australia's Liberal Prime Minister Scott Morrison pull off a surprise election victory in May, partly with high-volume, emotion-tweaking social media activity.

"The particular emotions that we need to unlock are arousal emotions, we're talking anger, excitement, pride, fear," Guerin told a centre-right political conference after the election.

He said winning "the battle of the thumbs" required frequent posts and varied means -- videos, memes and more -- to drive home the same core message.

"It's an arms race for who can dominate the news feed," he said.

In their first TV debate of the election on Tuesday, Johnson and Corbyn attacked each other's policies on Brexit, health care and the economy.

But the debate likely failed to answer the question that has dogged the campaign: Who can voters trust? The two leaders sidestepped tricky questions about their own policies in the hourlong encounter and drew derisive laughter from the studio audience at several points.

Both Johnson and Corbyn are trying to overcome a mountain of mistrust as they try to win over a Brexit-weary electorate.

Johnson is under fire for failing to deliver on his often-repeated vow that Britain would leave the European Union on Oct. 31. Audience members laughed when he urged voters, "Look what I have said I'm going to do as a politician and look what I've delivered."

Corbyn, a stolid socialist, is accused by critics of promoting high-tax policies and of failing to clamp down on anti-Semitism within his party. His refusal to say which side he would be on in a Brexit referendum was met with hoots of laughter when he suggested his position was perfectly clear.

The laughter underscored the importance of being transparent, according to Camilla Winlo, director of consultancy services at data protection and privacy consultancy DQM GRC.

Manipulating accounts as the Conservatives did could backfire if a candidate is trying to build trust with the electorate, she said.

"You can try to pull the wool over people's eyes ... but you will get pulled up on it," she told the AP.

The danger of such manipulation is that cynicism will override the democratic process, Moy said.

"Sadly, we know that four out of five people don't trust politicians to tell the truth," he said. "There is a danger that politicians will live down to those low expectations.

"If everyone is cynical, why aim for the trust you aren't getting?"