Trump faces accusers: What to watch during his State of the Union address 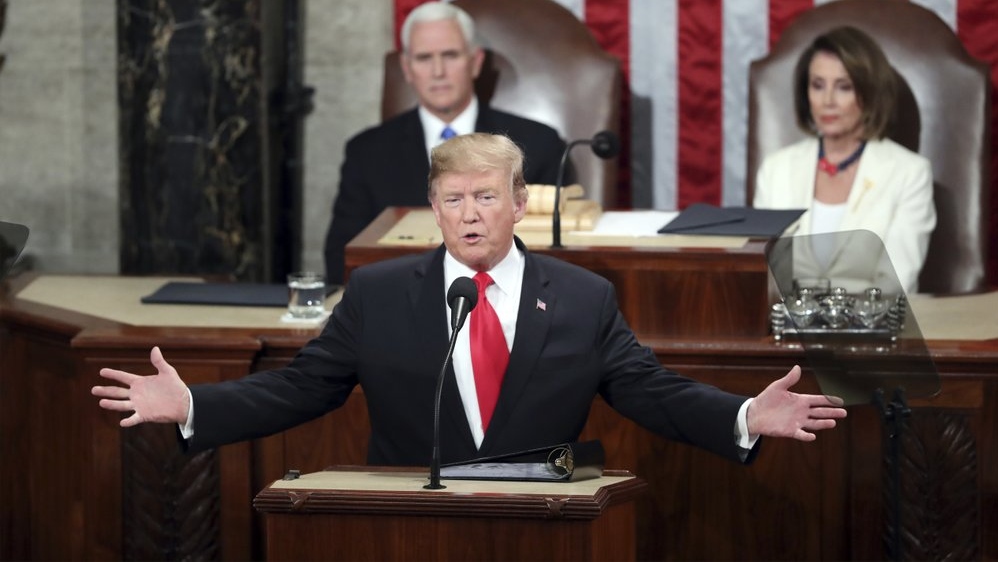 FILE - In this Feb. 5, 2019, file photo, U.S. President Donald Trump delivers his State of the Union address to a joint session of Congress on Capitol Hill in Washington, as Vice President Mike Pence and Speaker of the House Nancy Pelosi, D-Calif., watch. (AP Photo/Andrew Harnik, File)

On the brink of his Senate acquittal, U.S. President Donald Trump will be unleashing "relentless optimism" during his third State of the Union address, a speech designed to pivot from his impeachment to his drive for reelection. Trump is speaking from a position of strength, with nearly complete control of the Republican Party. The theme of his speech: "The Great American Comeback."

It'll be a different experience for Democrats, nearly all of whom voted for Trump's impeachment in the House. Where Trump will point to GOP unity ahead of the 2020 elections, Democrats and their difficult nomination will be on display after a long night of uncertainty in Iowa's kickoff caucuses.

The contrast with Trump's State of the Union address last year will be stark. Then, Democrats were triumphant just a few days after taking control of the House. Speaker Nancy Pelosi had forced Trump to reopen the government. Her smirking clap, eye-to-eye with him, mocked the president of the United States in front of the world.

What to watch during Trump's speech at 9 p.m. EST Tuesday:

They haven't spoken since Pelosi stood up, pointed at Trump across a table at the White House and bluntly suggested he is controlled by the president of Russia. "All roads lead to Putin," she said, before stalking out.

The extraordinary moment last October was captured in a now-famous photograph that Trump released and Pelosi slapped across the top of her Twitter page. At other times, she's questioned his "manhood" and he's called her "crazy."

Impeachment has only inflamed things. Pelosi last week said Trump will never have a true acquittal because the Senate did not hold a real trial with witnesses. But, she's said with relish, "He'll be impeached forever."

Trump, meanwhile, is poised to claim vindication in yet another "witch hunt" by Democrats who, he says, just wanted to overturn the 2016 election.

Watch them for any spark of civility. Pelosi and many Democratic women are expected to wear suffragette white to the speech.

The White House said last week to look for "can-do optimism in the face of unjustified pessimism we are hearing from some in Congress."

But officials would not guarantee that Trump will stick to his speech. The president will be in the same room as his accusers at a moment of impending victory. He has a strong and often-stated sense of grievance and is known for going off-script.

Look for roaring applause and cheers from Republicans, who have almost completely stuck with the retribution-loving president.

Trump is sure to use the speech to try to remind the country of what he's accomplished.

The White House would not say whether it is modeling Trump's speech on President Bill Clinton's in 1999, amid his own impeachment trial. Clinton never mentioned the I-word.

Look for Trump, like Clinton, to promote a strong economy. Trump is expected to lead with talk about what the White House calls a "blue-collar boom." There have been gains in blue-collar wages under Trump, though some of those gains have faded as Trump's trade war hurt manufacturing.

Watch to see if Trump can stick to the high road rhetorically, in his own style. Clinton ended his by asking the nation to envision a State of the Union speech 100 years from that night, from the "mountaintop of the American Century."

"Let it be said of us then that we were thinking not only of our time, but of their time; that we reached as high as our ideals. That we put aside our divisions and found a new hour of healing and hopefulness; that we joined together to serve and strengthen the land we love."

At the time, some said his rhetoric was over the top.

Will Trump even mention Ukraine? Republicans have started to come out and agree that the president had "inappropriately" tried to get political help from that country while he held up military aid.

The House impeached him for abuse of power and obstruction of Congress for his actions in response to the House investigation.

The issue clearly puts Republicans in a bind. Several have said that House prosecutors proved their case, but even so, the wrongdoing didn't rise to the level of impeachment or removal from office.

Will he make any mention of the new coronavirus?

"We've offered China help, but we can't have thousands of people coming in who may have this problem, the coronavirus," Trump said Sunday. At the same time, the president has tried to avoid angering China by being too outspoken, according to confidants.

Under new rules, U.S. citizens who have travelled in China within the last 14 days will be re-routed to one of 11 designated airports, where they will undergo enhanced health screening procedures.

Trump is focused on re-introducing himself to Americans as a president who has made the country -- and voters' lives specifically -- better. So listen for any mention of foreign policy and national security issues.

Trump's Mideast peace plan is a good test. Trump said that his efforts to solve the long-running conflict between Israel and the Palestinians would gain support because it's a "win-win" for both sides. In fact, Trump's plan favours Israel on key contentious issues and attaches nearly impossible conditions for granting the Palestinians their hoped-for state. Palestinian President Mahmoud Abbas dismissed the plan as "nonsense."

If Trump says nothing about the plan during the speech, that could signal that Trump knows it's in trouble.

Listen for how harsh Trump is on Tehran in the wake of Iran's bombing that injured U.S. soldiers in Iraq. The attack was retribution for the U.S. killing of Iranian Gen. Qassem Soleimani. In the month since, an uneasy quiet has settled over the region.

Will Trump suggest he'll eventually want to sit down and talk with the Iranians, signal the door is closed for talks, or poke Tehran?

The White House said to expect Trump's tone to be "determined" and "forceful."

Will Trump announce a troop withdrawal?

The Taliban want U.S. and other coalition forces to leave. Secretary of State Mike Pompeo says a deal is close, but it won't happen without a reduction in violence and a pathway for talks between the Taliban and other Afghans about a peaceful way forward for the nation.

There's always some suspense over who shows up and who stays away.

Other legislators have their own reasons for attending -- or not.

"That means that I do not clap. I do not acknowledge. I'm just there as a witness," she said.