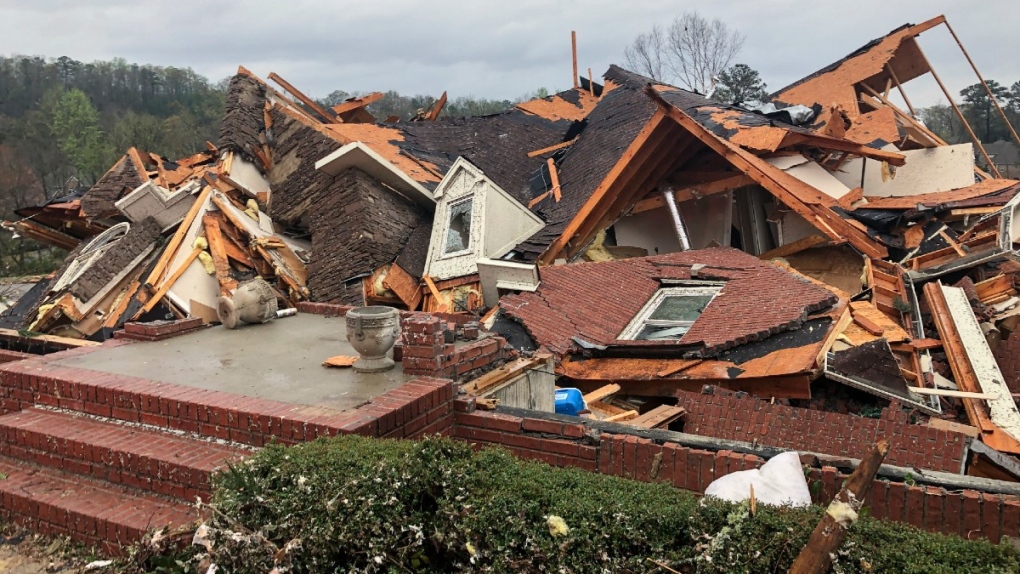 Damage is seen to a home after a tornado passed through the Eagle Point subdivision, March 25, 2021, near Birmingham, Ala. (Butch Dill / AP)

Parts of the U.S. south on Saturday are facing the possibility of severe weather for the third time this week, days after several states were hit by tornadoes.

Late Saturday afternoon, radar showed twin tornadoes in middle Tennessee, about 128 kilometres southwest of Nashville -- one near Linden and the other just east of Lexington. There were multiple tornado warnings in effect in the area, with reports of downed power lines and trees, along with structural damage.

The National Weather Service had previously issued a tornado watch until 10 p.m. ET for portions of Alabama, Arkansas, Mississippi and Tennessee.

Storms developing through the afternoon and evening have the potential to produce several tornadoes, a few of which could become intense. Additionally, damaging winds with gusts as high as 120 kph are likely, according to the weather service's Storm Prediction Center, along with golf-ball to baseball-sized hail.

The threat comes less than two days after multiple tornadoes were reported to have touched down in Mississippi, Alabama and Georgia, killing at least 6 people.

This weekend's forecast calls for damaging winds, hail and even tornadoes in some of the same locations just hit by tornadoes and damaging winds less than 48 hours ago. Storms Saturday could make cleanup efforts in those locations more difficult.

"All hazards are possible including very large hail, significant damaging winds and a couple of strong tornadoes," the Storm Prediction Center said.

"The main takeaway is Saturday could be a busy day across the region with flooding and severe weather being possible," according to the weather service's office in Memphis.

The Storm Prediction Center says there is an "enhanced risk" -- a level 3 out of 5 -- of severe storms for portions of Arkansas, Tennessee and Mississippi. There is a lower a risk from central Illinois through northern Texas and northern Georgia on Saturday into Saturday night.

While a few rounds of showers and thunderstorms are expected during the day, the severe weather threat will be most significant on Saturday evening and overnight into Sunday.

Current model guidance is suggesting a line of thunderstorms Saturday night, spanning from the Ohio River Valley to near the Gulf Coast. Wind and hail will be the main threats, but tornadoes are expected with some storms, especially in the mid-South.

"Just like the last few events these warm fronts have been pretty efficient rain producers and this particular one will be no exception," said the weather service's Memphis office.

The potential for flash flooding on Saturday stretches from the Arkansas-Louisiana-Texas region up through West Virginia due to the possible risk of excessive rainfall.

The weather service's Weather Prediction Center says that there will likely be scattered flash flooding centered across the Tennessee Valley, as the latest soil moisture analysis shows that "much of the risk area is above the 98th percentile (extremely saturated)."

By Sunday, the storm system is forecast to track farther east closer to the Atlantic Coast. Nearly 60 million people are at risk for severe storms from Delaware down to Georgia.

"Damaging wind will be the main threats, but a few tornadoes and some hail will also be possible before the front moves offshore during the evening," said the Storm Prediction Center about Sunday's threat.

The forecast calls for a "slight risk" -- level 2 out of 5 -- for severe storms in cities like Washington, D.C., Baltimore, Charlotte and Atlanta. There is an "enhanced risk" -- level 3 out of 5 -- for Richmond and Norfolk, Virginia. Temperatures will be in the 70s and 80s and this warm, moderately moist environment helps fuel thunderstorms.

Another concern for Sunday is flooding. Several states have had multiple days of rain this past week, leading to already saturated ground. Through Monday widespread rainfall of 2-4 inches is expected, with locally higher amounts possible across the mid-South.

The highest chance for flooding this weekend exists in Alabama, Arkansas, Georgia, Mississippi and Tennessee.

Another area of concern is along the Gulf Coast. Since Tuesday, areas of Louisiana and Mississippi received more than 8 inches of rain, with some pockets of 10-14 inches across coastal parishes south of metro New Orleans. With the ground already very saturated, it will not take much rain on Sunday to trigger flooding.