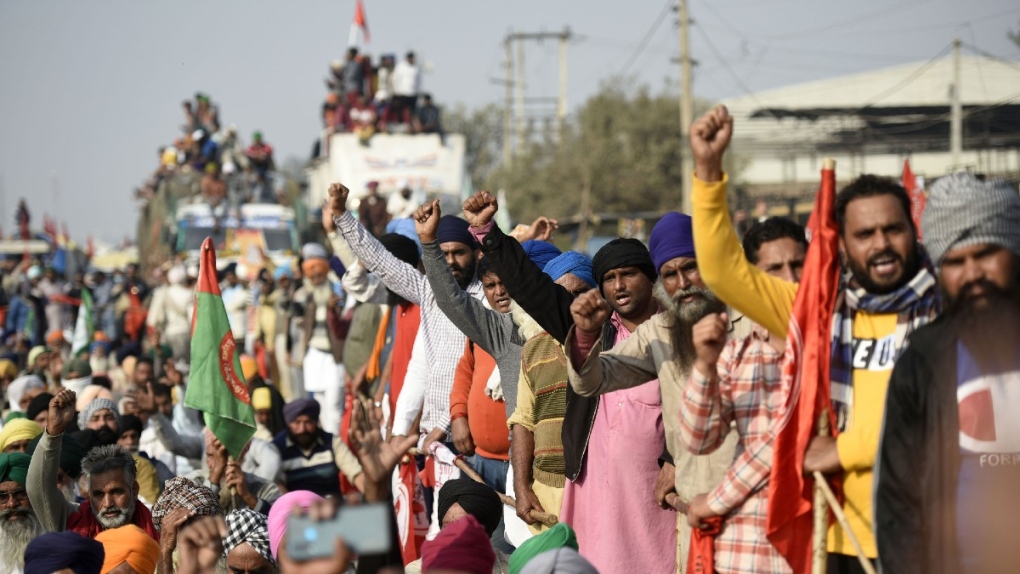 Tens of thousands of farmers have swarmed India's capital where they intend to camp out for weeks to protest new agricultural laws that they say could destroy their livelihoods.

Farmers from the nearby states of Punjab, Haryana and Uttar Pradesh began arriving by tractors and on foot at the outskirts of New Delhi last week, where they blocked roads and set up makeshift camps, according to protest leaders. Some slept on the road or in their tractors, and several places of worship offered protesters food.

Police attempted to block demonstrators from entering the city. They fired tear gas and water cannons Thursday and Friday after protesters pelted police officers with stones and damaged public property, according to Manoj Yadav, a senior police official from Haryana.

The farmers are protesting laws passed in September, which Indian Prime Minister Narendra Modi says will give farmers more autonomy to set their own prices and sell directly to private businesses, such as supermarket chains.

But the move has infuriated India's farmers, who say that the new rules will leave them worse off by making it easier for corporates to exploit agricultural workers who make up more than half of India's 480 million-strong workforce, according to India's most recent Census in 2011.

According to Ashutosh Mishra, the media coordinator of protest organizer All India Kisan Sangharsh Committee, which represents around 200 farming unions, tens of thousands of demonstrators have gathered at each of New Delhi's three borders -- a line of protesters at one of the borders stretches for 30 kilometres, he said.

Police have put up barriers and dug up roads to prevent protesters from coming into the city centre to hold sit-ins. Mishra expects more farmers from around the country to join the protests in the coming days.

That's despite New Delhi being a hotspot for COVID-19 in a country that has already reported more than 9.4 million reported cases, the most in any country bar the United States.

"We are trying to be weary of Covid but we don't have an option -- it is a question of life and death," said Mukut Singh, the president of a farmers union in the northern state of Uttar Pradesh, who is leading thousands in protest in his home state, and says he will join the protesters in Delhi later this week.

"We are the ones who have provided food, milk, vegetables when the whole country was in lockdown -- we were still toiling in the fields," he said. "It is the government who has put us at risk by introducing these laws during Covid."

WHAT THE PROTESTS ARE ABOUT

For decades, the Indian government has offered guaranteed prices to farmers for certain crops, providing long-term certainty that allows them to make investments for the next crop cycle.

Under the previous laws, farmers had to sell their goods at auction at their state's Agricultural Produce Market Committee, where they were guaranteed to get at least the government-agreed minimum price. There were restrictions on who could purchase at auction and prices were capped for essential commodities.

Modi's new laws dismantle the committee structure, allowing farmers to sell their goods to anyone for any price. Farmers have more freedom to do things such as sell direct to buyers and sell to other states.

Modi said increasing market competition would be a good thing as it fulfills farmers' demands for higher income and gives them new rights and opportunities.

"The farmers should get the advantage of a big and comprehensive market which opens our country to global markets," Modi said on Monday, as farmers protested in the capital. He hopes it will attract private investment into the agricultural industry, which has lagged as other parts of the country's economy have modernized.

But farmers argue that the rules could help big companies drive down prices. While farmers could sell crops at elevated prices if the demand is there, conversely, they could struggle to meet the minimum price in years when there is too much supply in the market.

"There is a lot of anger among farmers," he said. "We don't get even the minimum support price that is presently declared -- removing these protections and making it easier for corporates to enter will completely buy us out."

WHY IT'S SUCH A HOT POLITICAL ISSUE

Agriculture is the primary source of livelihood for about 58% of India's 1.3 billion population, meaning farmers are the biggest voter block in the country.

That's made farming a central political issue, with farmers arguing for years to get the minimum guaranteed prices increased.

In a bid to win over farmers, Modi's Hindu nationalist Bharatiya Janata Party (BJP) said in its 2014 general election manifesto that all crop prices should be fixed at a minimum of 50% higher than the production costs. In 2016, Modi promised to boost the country's agriculture sector with a target of doubling the income of farmers by 2022.

Modi and his government continue to insist that they are supporting farmers.

He hailed the new laws as a "watershed moment" which will ensure a complete transformation of the agriculture sector. But besides calling the move long overdue, Modi has not said why he opted to introduce these measures during the pandemic, which has caused India to suffer its first recession in decades.

"The Indian government under the leadership of Prime Minister Modi has always stood in full commitment to resolving the problems faced by farmers and will continue to stand by them," said Narendra Singh Tomar, the Minister of Agriculture and Farmer Welfare.

Tomar urged farmers to abandon their protests and instead discuss their issues with the government -- although so far, Modi has shown no sign of capitulating to protesters' demands.