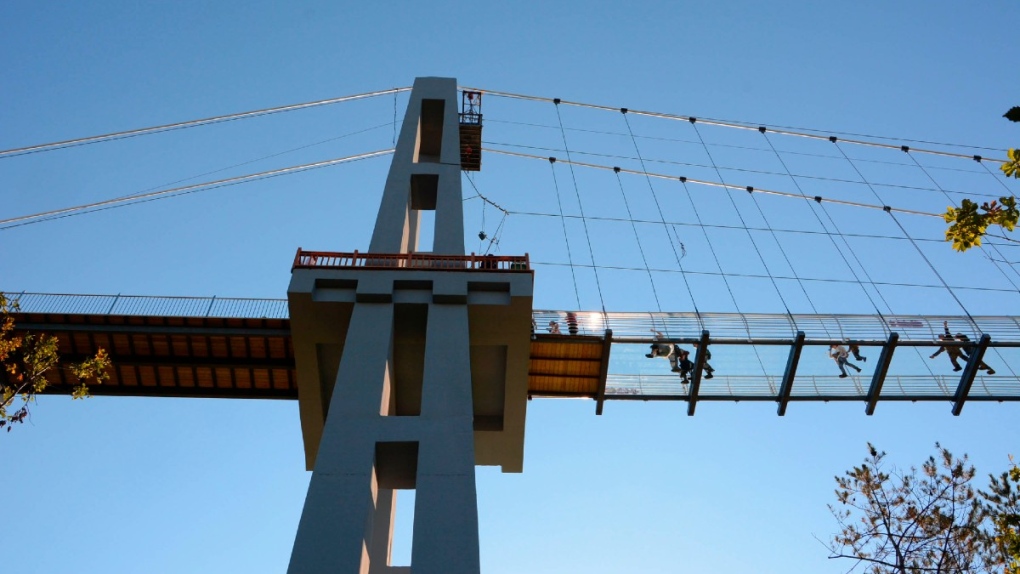 Extreme weather is being blamed for a terrifying incident that left one tourist stranded on a 260-metre-high glass-bottomed suspension bridge in northeast China's Jilin province on May 7. (Source: Wang mingming / ICHPL Imaginechina / AP)

Extreme weather is being blamed for a terrifying incident that left one tourist stranded on a 260-meter-high glass-bottomed suspension bridge in northeast China's Jilin province on May 7.

In an image shared by Chinese state media Xinhua on Chinese social media site Weibo, a person can be seen clinging to the rail of the bridge, surrounded by missing and damaged glass platform panels.

The bridge is located in the Piyan Mountain Cultural Tourism Scenic Area outside the city of Longjing. According to a statement posted on the Weibo account of local authorities, the incident took place at 12:45 p.m. on Friday, when was hit by record-high winds of up to 150 kilometres per hour.

Officials say rescue teams were called in to assist the stranded tourist, who was able to evacuate the bridge at 1:20 p.m.

"The staff of the scenic area rushed to the scene as soon as possible, brought emergency equipment and successfully transferred the trapped person to a safe area," said the statement.

"There were no casualties. After being kept in the hospital for observation, the trapped person was in stable emotional and physical condition and has been discharged from the hospital."

The entire Piyan Mountain Scenic Area has since been closed and officials have ordered a comprehensive safety inspection of all attractions in the area, including the bridge.

China is famed for its record-breaking glass bridges, which are popular tourist attractions. These include a new 526-metre-long structure in Qingyuan, Guangdong, which holds the Guinness World Record for longest glass-bottom bridge.

But the incident in Jilin province has some netizens in China expressing alarm.

"Things I worried about have happened -- [I will] never risk trying dangerous things in the future," said one user on the Weibo social media site.

According to a report by Xinhua, some local governments have already put additional safety guidelines in place.

"For example, glass bridges should not be built in areas with high seismic activity and must be closed during bad weather and natural disasters, and the number of pedestrians on such bridges and walkways will be limited to no more than three per square metre," says the report.