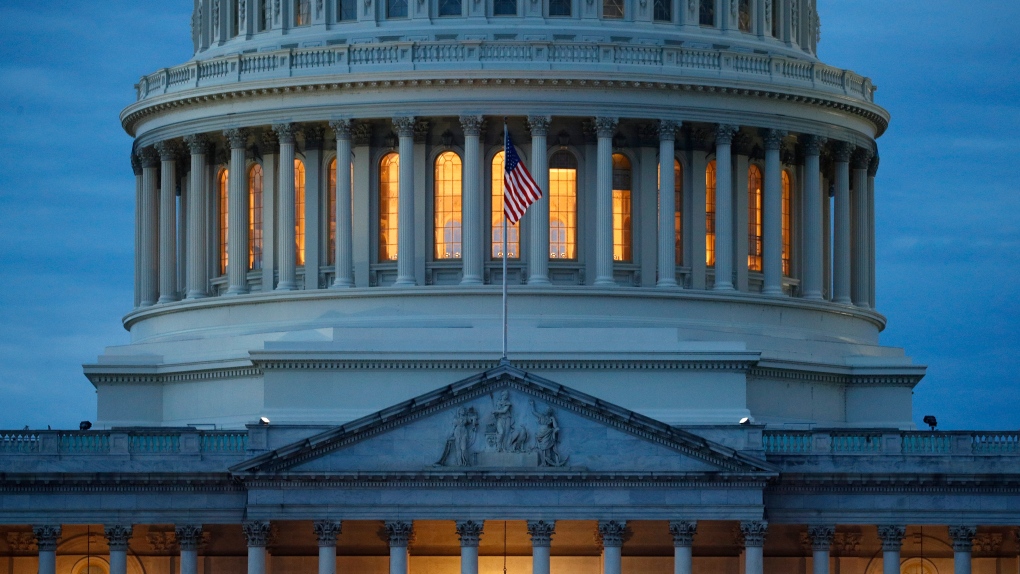 In this May 3, 2020, file photo, light shines from inside the U.S. Capitol dome at dusk on Capitol Hill in Washington. (AP Photo/Patrick Semansky)

WASHINGTON -- One small-town Oklahoma mayor testified before the U.S. Congress she's worried the city's 18-bed hospital can't handle a second COVID-19 wave. Many counties are slashing sizable chunks of their government work force. States are staring down red ink as the fiscal year comes to a close.

As local leaders are pleading for more federal aid -- even before protests over police violence erupted in almost every corner of the country -- the U.S. Senate resumed session Monday with no immediate plans to consider a fresh round of relief. Instead, Senate Republicans are focused on ending the pandemic's stay-home economy by trimming unemployment benefits to push some of 41 million suddenly jobless Americans back to work when jobs return.

The standoff is perhaps standard Washington negotiating, but "they're playing a very dangerous game of chicken," said Meredith McGehee, executive director at Issue One, which advocates for a government reforms to ease political gridlock.

Congress is confronting mounting crises -- the virus outbreak, the shattered economy and now nationwide protests over the killings of black people at the hands of police -- all crashing into an election year. It's a moment that calls for steady leadership. But the House is working remotely rather than risk convening in the pandemic, while the Senate wants to wait to see if nearly US$2 trillion in previously approved aid is sufficient while it focuses on President Donald Trump's priorities.

A bipartisan group of economists called on Congress Monday to provide US$1 trillion in additional aid to states and cities.

Mark Zandi, chief economist at Moody's Analytics, said roughly 3 million state and local government employees could lose their jobs in the next year -- in addition to the nearly 1 million that have already been laid off.

"I can't imagine a successful (relief) package without that," said Glenn Hubbard, an economist at Columbia University and a former economic adviser to George W. Bush, on the conference call organized by the liberal Economic Policy Institute. "This is about as close to a no-brainer that you could do as possible."

Republicans pushed ahead with the back-to-work strategy.

Rep. Kevin Kevin Brady of Texas, the top Republican on the Ways & Means Committee, introduced legislation for a return-to-work bonus -- two additional weeks of an existing US$600 weekly jobless benefit if recalled employees go back to workplaces. Senate Republicans are mulling a similar proposal.

Republicans worry that the US$600 unemployment boost is preventing workers from returning to their jobs. They also want to develop a liability shield to protect businesses that do reopen from lawsuits related to COVID-19.

Senate Majority Leader Mitch McConnell has said the Senate won't be considering the US$3 trillion "grab bag" of the House-passed Heroes Act, which includes almost US$1 trillion in aid to the states and cities.

Republicans who control the chamber will also focus on investigations Trump wants of the Obama administration's handling of the probe of Russian interference in the 2016 election.

McConnell on Monday urged the federal government to intervene if necessary to end the wave of national protests following the death of George Floyd in Minnesota. Reading the names as he opened the Senate, McConnell said Floyd's death, along with those of other black Americans -- Ahmad Arbery and, in his home state of Kentucky, Breonna Taylor -- do not appear to be simply three isolated incidents but rather "the latest chapter in our national struggle to make equal justice and equal protection under the law a fact of life for all Americans."

In urging action from Congress, House Speaker Nancy Pelosi on Sunday linked Floyd's death in Minnesota to the "injustice" of the virus outbreak's impact on African American and other minority populations.

Democrats are quickly focusing on a legislative response to the police involvement in Floyd's death, including a proposal Monday from Sen. Cory Booker, D-N.J., for a comprehensive overhaul of law enforcement tactics.

Senate Democratic leader Chuck Schumer called on McConnell to cancel the "conspiracy hearings" and focus on law enforcement reforms and the mounting health and economic crises of COVID-19.

Deadlines are fast approaching. Most states have budget deadlines with the new fiscal year starting July 1. The US$600 boost to unemployment benefits approved in the previous CARES Act aid package is set to expire July 31. Small businesses that tapped the Paycheck Protection Program will start seeing loans come due without adjustments by Congress.

Teryn Zmuda, chief economist at the National Association of Counties, said local governments have been "on the forefront" of the COVID response but there is a dollar amount associated with that.

Many jurisdictions faced the double whammy of increased overtime pay for essential workers and declining revenues as stay-home orders cut sales and gas taxes, toll fees and other revenue streams.

At a hearing of the new House Select Subcommittee on the Coronavirus Crisis, Mayor Mary Jane Scott of Mangum, Oklahoma, testified Friday that the area's small hospital, which receives patients from across the rural region, was overloaded when the community faced an outbreak. She can't imagine trying to withstand a second wave.

Republicans argue against what some call bailouts for states, warning some have overextended with generous services, pensions or mismanagement.

Sen. John Thune, R-S.D., the majority whip, said at a Friday forum with a conservative group that Congress has already "flooded the zone" with a "staggering amount" of funds.