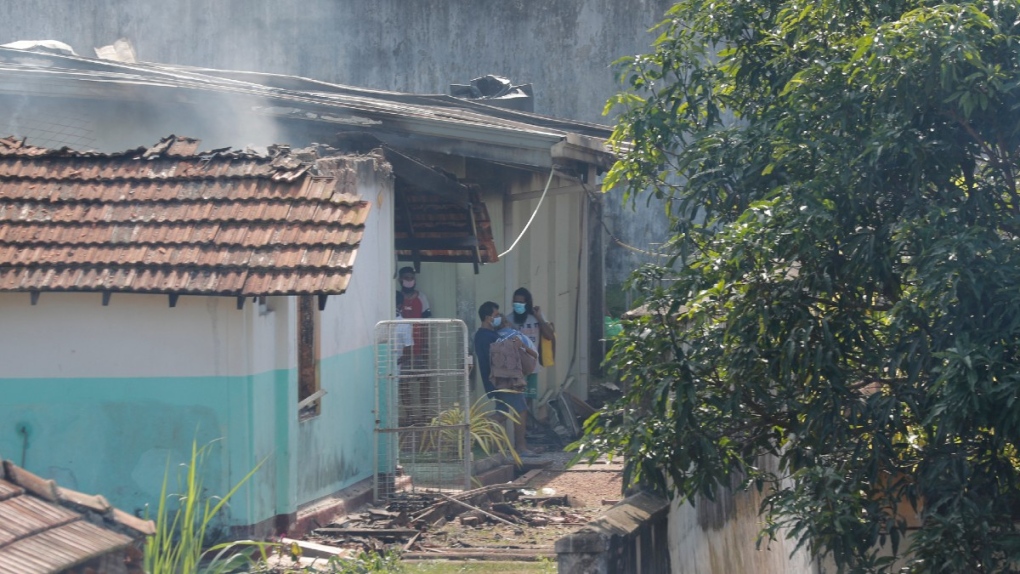 A Sri Lankan inmate of the Mahara prison carries a fellow inmate out from a damaged building, on Nov. 30, 2020. (Eranga Jayawardena / AP)

COLOMBO, SRI LANKA -- Six inmates were killed and 35 others were injured when guards opened fire to control a riot at a prison on the outskirts of Sri Lanka's capital, officials said Monday. Two guards were critically injured, they said.

Pandemic-related unrest has been growing in Sri Lanka's overcrowded prisons. Inmates have staged protests in recent weeks at several prisons as the number of coronavirus cases surges in the facilities.

But "the unrest situation turned into a prison riot," he said, adding that prisoners tried to take control of the prison and hundreds attempted to escape.

The inmates "reportedly destroyed most of the property including offices inside the prison," Rohana said.

He said hundreds of additional police were deployed to help the guards and strengthen security around the prison.

An inmate was killed in similar unrest at another prison last week. Another died in March.

More than a thousand inmates in five prisons have tested positive for the coronavirus and at least two have died. About 50 prison guards have also tested positive.

Senaka Perera, a lawyer with the Committee for Protecting Rights of Prisoners, said the inmates at Mahara prison had been frustrated because their pleas for coronavirus testing and separation of infected prisoners had been ignored by officials for more than a month.

On Monday, about 500 relatives of inmates gathered in front of the prison and urged the authorities to provide information about the prisoners and ensure their safety.

Sujeewa Silva said her son has been detained at the facility for seven months after being arrested on drug charges. "I want to know whether he is safe. I asked the officers, please tell me the condition of my son," she said.

Sri Lankan prisons are highly congested with more than 26,000 inmates crowded into facilities with a capacity of 10,000.

Sri Lanka has experienced an upsurge in the coronavirus since last month when two clusters -- one centred at a garment factory and other at a fish market -- emerged in Colombo and its suburbs.

Confirmed cases from the two clusters have reached 19,449. Sri Lanka has reported a total number of 22,988 coronavirus cases, including 109 fatalities.