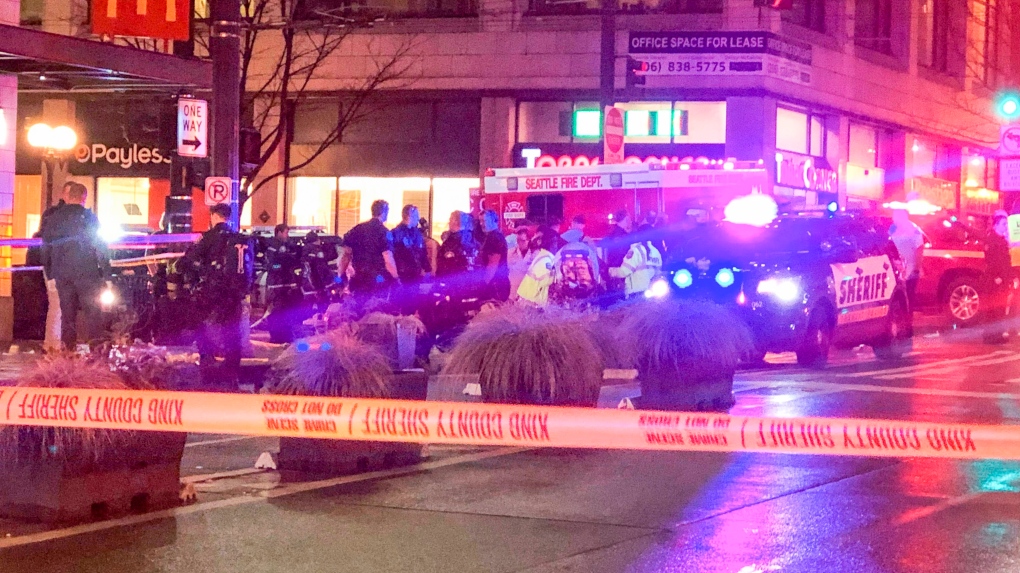 Police work the scene of a shooting on Third Avenue and Pine Street, Wednesday, Jan. 22, 2020, in Seattle. (Amanda Snyder/The Seattle Times via AP)

SEATTLE -- A shootout in downtown Seattle during the evening commute that left a woman dead and a 9-year-old boy injured was third violent incident this week in a part of the city long known for rampant drug use and street unrest.

Business groups implored officials to improve public safety. And while crime rates in Seattle are low compared to other big cities, critics say mayhem downtown -- from shootings, to drug dealing and the effects of the city's ongoing homelessness crisis -- makes locals and tourists feel unsafe.

The Downtown Seattle Association, a business group, said in a statement the area where Wednesday's shooting happened has been a high-crime spot for years. "'We call on public officials to devote the resources necessary to improve safety in downtown," the group said. "'We say enough is enough."

Three people, including the 9-year-old boy remained, hospitalized Thursday after police say several people in a dispute opened fire, killing a woman. It was the third downtown Seattle shooting in two days.

Three were still hospitalized The condition of a 55-year-old woman was upgraded from critical condition to serious and a 32-year-old man and the boy were listed in satisfactory condition. Amazon, which has offices nearby and is the city's largest employer, said two of its workers who happened to be passing by were wounded, but their injuries were not life-threatening.

"We are deeply troubled by last night's events in Seattle and our thoughts go out to everyone impacted by this tragedy," Amazon said in a statement Thursday

Video from the scene showed several people firing weapons after the dispute outside a McDonald's. Police including homicide and gang units were investigating, she said. No arrests were immediately reported.

"This is not a random incident, there were multiple people involved,"' said Police Chief Carmen Best. "There was a dispute that happened in front of the McDonald's, people pulled out guns, shots rang out, people ran in various directions."

Samantha Cook said she was refilling her transit card in a nearby station when she heard gunfire Wednesday.

"I was on the first set of escalators," Cook told The Seattle Times. "There were a lot of gunshots that started going off -- maybe 10 or 11. It was just rapid fire."

Tyler Parsons told the Times he was was working nearby at a coffee shop when he saw people drop to the ground. Some took cover behind the cash register where he worked and Parsons took five or six customers to a storage area.

The shooting was "just kind of terrifying. Terrifying it's so close," Parsons said.

Washington Gov. Jay Inslee said in a statement that he was "horrified and dismayed to hear about the shooting."

There were two other violent incidents in downtown earlier this week. Police found a man with a gunshot wound in a mall stairwell Tuesday, and he later died at a hospital. Police shot a person in another area of downtown earlier on Wednesday.

This story has been corrected to say Amazon is Seattle's largest employer, not the region's