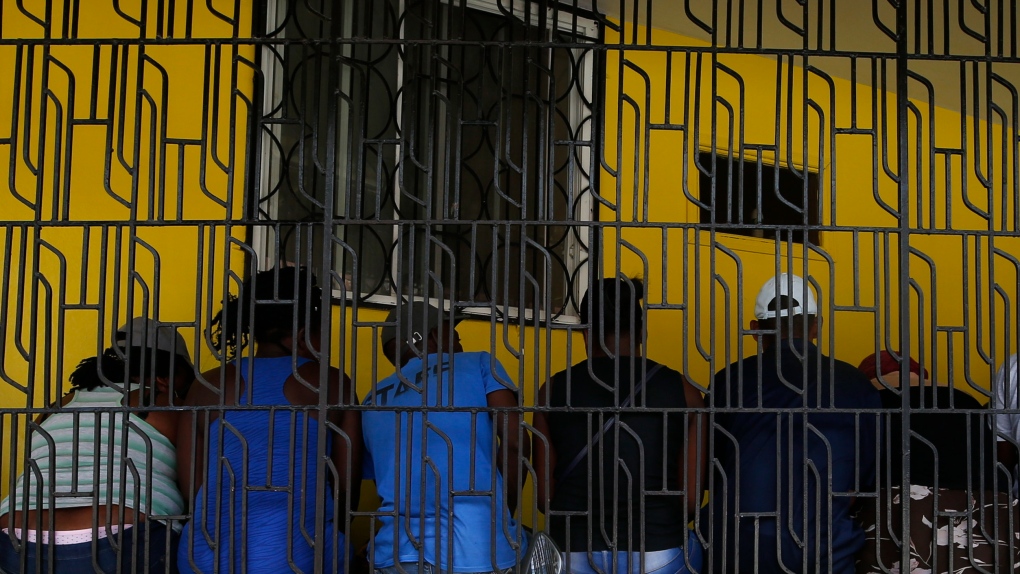 People wait in a long line to get out money at a financial institution in Leogane, Haiti, Saturday, Oct. 5, 2019. The political turmoil is hitting cities and towns outside the capital of Port-au-Prince especially hard, forcing non-government organizations to suspend aid as barricades ranging from large rocks to burning tires cut off the flow of goods between the city and the countryside, further deepening poverty in places like Leogane.(AP Photo/Rebecca Blackwell)

LEOGANE, Haiti -- Gabriel Duvalesse squatted slightly as he prepared to push 50 gallons (190 litres) of cooking oil in an old wheelbarrow to an outdoors market an hour away so he could earn $1.

It was his first job in seven days as deadly protests paralyze Haiti's economy and shutter businesses and schools. Opposition leaders and thousands of supporters are demanding the resignation of President Jovenel Moise amid anger over government corruption, ballooning inflation and scarcity of fuel and other basic goods.

Seventeen people have been reported killed and nearly 200 injured in the protests.

The political turmoil is hitting cities and towns outside the capital of Port-au-Prince especially hard, forcing non-government organizations to suspend aid as barricades of large rocks and burning tires cut off the flow of goods between the city and the countryside. The crisis is deepening poverty in places such as Leogane, the epicenter of Haiti's devastating 2010 earthquake.

The United Nations said that before the protests even began, some 2.6 million people across Haiti were vulnerable to food shortages, adding that roadblocks have severely impacted some humanitarian programs. On Sept. 16, the World Food Programme was forced to suspend all food deliveries to schools as demonstrations started.

Meanwhile, cash transfers to some 37,000 people in need were postponed.

He owns a wholesale company that sells items including rice, soap, cooking oil and cereal to small markets. But his warehouse is nearly empty and he struggles to find truck drivers willing to go to markets to deliver the goods because of thieves and barricades.

"It's an enormous economic loss," said Germeille, a father of two who is thinking of moving to the Dominican Republic if things don't improve soon. "If there's no way to make a living here, I can't stay."

Rice, coconuts, milk and diapers are among the dozens of goods that people in this coastal community of more than 200,000 inhabitants say are hard to find since the protests began in mid-September.

On Saturday, a grocery store near the town's centre opened briefly to sell rice, said 40-year-old IT engineer Sony Raymond.

"In less than three hours it was gone," he said. "Leogane is basically paralyzed."

Security concerns grew on Sunday after onlookers said they saw two men fatally shoot a third to steal his bike in Leogane.

The crowd then went after the two men with machetes, dragging one of them through the street while witnesses said the other committed suicide. All three bodies still lay on the street hours after it happened, with one ambulance from the health department passing by without stopping.

The protests and barricades are increasingly isolating already struggling communities across Haiti, including those like Barriere Jeudi, where amateur bull fights on weekends provide some distraction from people's financial problems.

Bruinel Jean-Louis, who repairs refrigerators and stoves, said he hasn't been able to find much work because he can't travel to find the parts he needs.

"It takes a very long time, and that also makes me suffer," he said as several bulls brayed behind him.

To make up for the financial shortfall, he sells halters for horses.

In a small mountain village near the coastal city of Jacmel, some phones began ringing at 5 a.m. on Sunday as friends and family let each other know that a gas station would open that day and there was a limited supply.

The line already began forming as the sun came up.

Theodore Rathgens, a 53-year-old social worker and construction engineer, said that while protests and blockades had caused problems in Jacmel, he didn't blame Moise for the problems.

"It's the political clans," he said.

Rathgens said Haiti's justice department should also take it upon itself and not wait for instructions from Moise to investigate former top government officials accused of mismanaging millions of dollars in funds from a Venezuela-subsidized oil plan slated in part for social programs.

Haitian economist Kesner Pharel noted that Haiti is a country of nearly 11 million people where 60% make less than $2 a day and 25% make less than $1 a day. He said the problem is worsening now that food is not going to Haiti's capital nor manufactured goods to rural areas, causing a stoppage to the economy.

The situation angers 62-year-old Carolle Bercy, who moved back to Haiti last year after working in financial services for 30 years in Connecticut, both in Stanford and Bridgeport.

She said she has seen people fighting over fuel on the rare instances that a gas station opens, and she worries about the future of Haitians.

"It's unbelievable," she said. "No country on earth should go what Haitian people are going through."