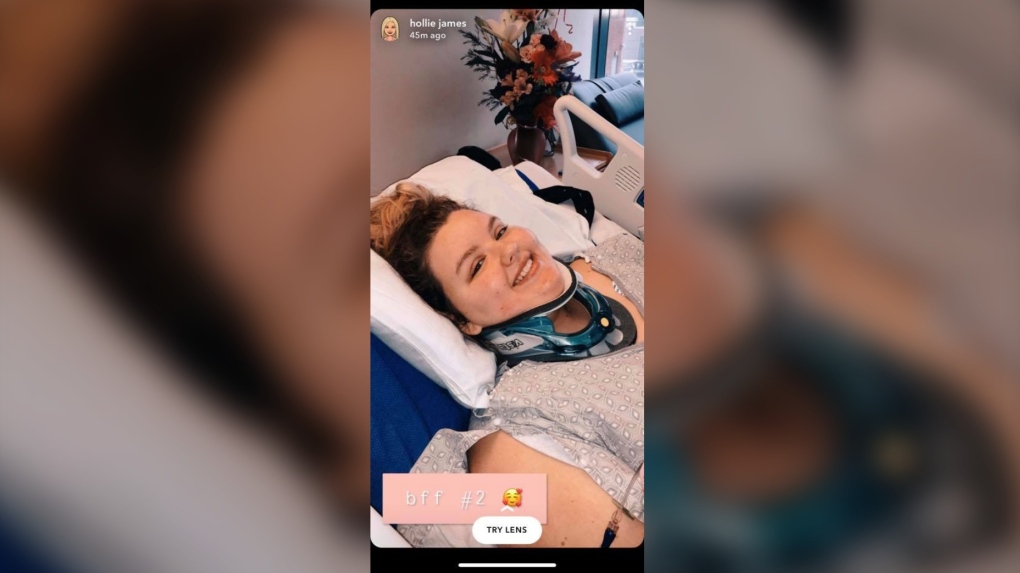 Teenager Macy Smith hydroplaned off the road between two trees and crashed 25 feet down an embankment at Pilot Mountain, North Carolina, on June 7. (Facebook/Macy Smith)

A teenage girl who became pinned under her car for seven hours following a mountain side crash was rescued after her mother used a phone tracking app to find her, according to local reports.

Teenager Macy Smith hydroplaned off the road between two trees and crashed 25 feet down an embankment at Pilot Mountain, North Carolina, on June 7.

The car flipped three times, which saw the 17 year old land in the back seat with her arm pinned between the car and the ground.

Concerned mom Catrina Cramer Alexander resorted to the Find My Friends app after her daughter missed curfew and did not respond to texts or calls, she told WGMY News.

She hopped in her car to investigate after the GPS tracker showed Smith had been in the same location for “far too long.”

“I was lying in a ditch 20 yards off the road for the seventh hour with my arm pinned under my car,” Smith wrote on Facebook.

“I will never forget the sound of my family calling out my name when they found me around 10.30 p.m.”

Smith suffered a fractured neck, nerve damage in her arm and had surgery to relieve swelling, she wrote.

She attributes her miracle escape to divine intervention.

“I searched for my phone to call for help but the only thing in sight was my bible,” she wrote.

“I held on to my bible and prayed harder than I had ever prayed before. I do not deserve to be here right now, but God has bigger plans for me.”

Both Smith and her mom thanked everyone for their prayers and messages of support.

Smith has another round of surgery but reportedly has movement in her fingers in her crushed arm.