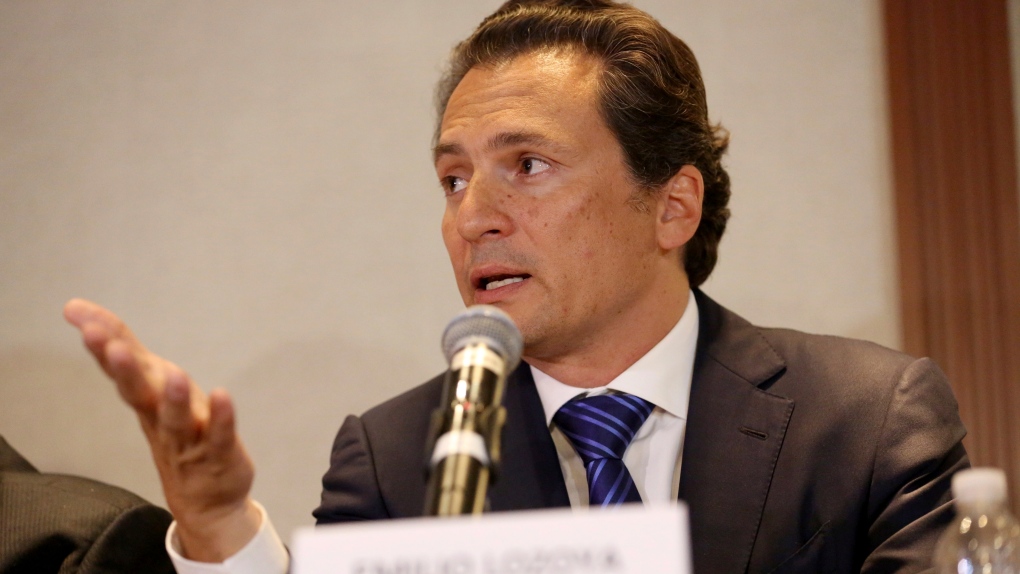 In this Aug. 17, 2017 file photo, Emilio Lozoya, former head of Mexico's state-owned oil company Pemex, gives a press conference in Mexico City. On Feb 2020, Spanish police arrested Lozoya in southern Spain. Mexico had been pursuing Lozoya through Europe for months over allegations of an illegal contract while he was at Pemex. (AP Photo/Gustavo Martinez Contreras, File)

MEXICO CITY -- Until recently, Mexico had done little to pursue corruption revealed by the investigation into Brazilian construction giant Odebrecht, which has ensnared politicians, business leaders, and even former and sitting presidents in other Latin American countries.

Mexican Attorney General Alejandro Gertz Manero has no doubt why: "Evidently because there was a formula to cover up this whole situation."

Things appear to be changing. Last week, Spanish police arrested Emilio Lozoya, the former head of Mexico's state-owned oil company Pemex in southern Spain. He was carrying a driver's license with his photo, but a different name.

Mexico had been pursuing Lozoya through Europe for months over allegations of an illegal contract while he was at Pemex.

In an interview with The Associated Press Monday, Gertz said Lozoya's case is a "symbol" of the corruption schemes of the 2012-2018 administration of President Enrique Pena Nieto.

Lozoya, he said, is "the embodiment of an administration's and of a government's way of behaving." Pena Nieto could not be immediately reached for comment.

Lozoya, who was also a key figure in Pena Nieto's presidential campaign, has always denied taking bribes. But his arrest has raised the hopes that he may open the door to knowing the scale of the previous administration's corruption and maybe even lead to Pena Nieto.

Asked if his office had its sights on the former president, Gertz was cautious.

"To make an affirmation of this kind would be a political act on my part," he said. "I have to dedicate myself to legal behaviour; if I enter into political hypothesis I am going to distort my work."

Gertz also demurred on discussing any other former officials who could be involved.

However, he added that "what we can say clearly is that those crimes are not committed alone. To set up a criminal structure of that size you can't do it alone, there has to be a whole series of participants."

To Gertz, not investigating the Odebrecht case was "an exception and that exception was very shameful."

"It's iconic for the credibility and the plan of the new political group in power and of the new government," Gertz said.

The Odebrecht scandal exploded in 2016. The Brazilian construction giant has admitted to paying nearly $800 million in bribes, much of it to officials in Latin America who rewarded the company with construction contracts. The investigation resulted in a cascade of arrests and prosecutions across the region. In Peru, it proved to be the downfall of President Pedro Pablo Kuczynski.

Mexico and Venezuela were the exceptions, despite evidence that the company paid Pemex officials $10.5 million between 2010 and 2014 to win government contracts.

One former Odebrecht employee even named Lozoya as helping them get contracts and explained how he was compensated.