Lebanese held in Greece on hijacking suspicion to fly home 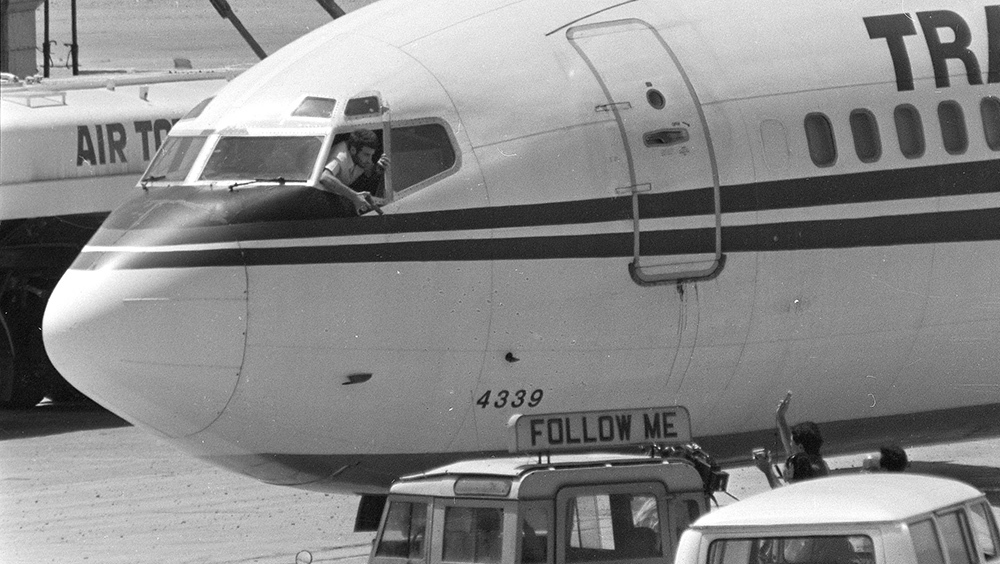 A Shiite Moslem hijacker points his pistol toward an ABC news media crew from the window of the cockpit of the Trans World Airlines jet as the American television crew approaches the jet for an interview at Beirut International Airport, Lebanon, Wednesday, June 19, 1985. (AP Photo/Herve Merliac/FILE)

BEIRUT -- A Lebanese citizen who was detained in Greece on suspicion of involvement in a 1985 TWA hijacking and set free after it turned out to be a case of mistaken identity is in good health and expected to fly back to Lebanon, the man and his wife said Tuesday.

Mohammed Saleh's wife, Leila, told The Associated Press by telephone from her home in the southern Lebanese port city of Sidon that she spoke with her husband, who also sent her his photos as proof that he is fine and staying in a hotel while he completes necessary paperwork ahead of his return home.

The 65-year-old man was arrested Thursday on the resort island of Mykonos, where he stopped during a cruise. The name on his passport came up on a European police computer system as that of a man wanted by Germany over the hijacking, in which an American was killed.

The police statement said German authorities were unable to identify the suspect and finally said Monday afternoon that they wouldn't be seeking his extradition because he was not the man they wanted. The Greek police never released the man's name.

On Tuesday morning, Saleh sent the AP a short text message: "I am still working on the release documents. I am free but there are some measures in order to get a visa."

Saleh needs a visa now to be able to go to Athens as those going on cruises don't need one since they only spend a few hours on the island.

Saleh, a long time journalist for Lebanon's daily As-Safir daily that folded in 2016, was released without charges and was being put up at a hotel on the Aegean Sea island of Syros, where he had been detained the past four days, a Greek police statement said.

The Lebanese foreign ministry said authorities in Greece were told by the Germans that Mohammed Saleh is not the wanted man and was released late Monday. It said Saleh will later get his passport and go to Greece although there might be some delays because of a public transport strike in the European country.

TWA Flight 847 was commandeered by hijackers shortly after taking off from Athens on June 14, 1985. It originated in Cairo and had San Diego as a final destination, with stops scheduled in Athens, Rome, Boston and Los Angeles.

The hijackers shot and killed U.S. Navy diver Robert Stethem, 23, after beating him unconscious. They released the other 146 passengers and crew members on the plane during an ordeal that included stops in Beirut and Algiers. The last hostage was freed after 17 days.

Several Greek media outlets had identified the Mykonos detainee as Mohammed Ali Hammadi, who was arrested in Frankfurt in 1987 and convicted in Germany for the hijacking and Stethem's slaying.

Hammadi, an alleged Hezbollah member, was sentenced to life in prison but was paroled in 2005 and returned to Lebanon.

Germany resisted pressure to extradite him to the United States after Hezbollah abducted two German citizens in Beirut and threatened to kill them.

Hammadi, along with fellow hijacker Hasan Izz-Al-Din and accomplice Ali Atwa, remains on the FBI's list of most wanted terrorists. The FBI offered a reward of up to $5 million for information leading to each man's capture.