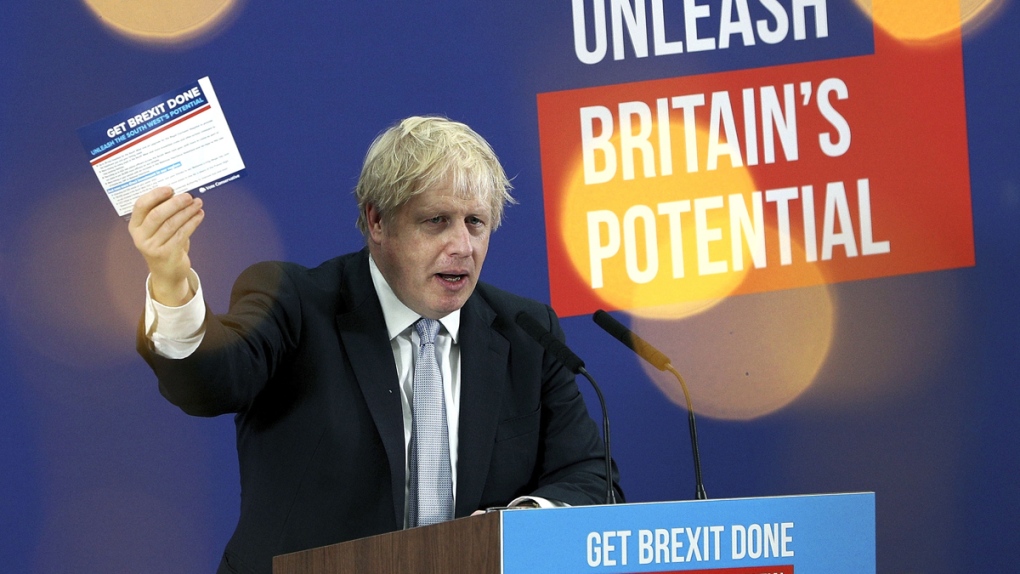 LONDON -- LONDON -- Britain's health system became a battleground in the country's election campaign on Wednesday, as opposition Labour Party leader Jeremy Corbyn accused Conservative Prime Minister Boris Johnson of secretly seeking a post-Brexit trade deal with the United States that would drive up the cost of drugs and imperil the state-funded service.

With the future of the National Health Service a hot issue in campaigning ahead of the Dec. 12 general election, Corbyn waved 451 pages of documents at a press conference declaring that they covered six rounds of negotiations between U.S. and U.K. negotiators over two years from July 2017. The documents, which have previously been published in redacted form, cover preliminary soundings ahead of formal trade talks that are set to begin once Britain leaves the European Union.

Corbyn said the leaked trade dossier provided proof Johnson was planning to put the National Health Service "up for sale" in trade talks.

"He tried to cover it up in a secret agenda and today it has been exposed," Corbyn said.

Johnson -- who was not prime minister for most of the period when the talks took place -- rejected the claim.

"It is a total nonsense, and it is endlessly repeated by the Labour Party, that the NHS is somehow up for sale," Johnson said. "Nothing could be further from the truth."

Labour is campaigning heavily on the claim that the overstretched but treasured NHS is not safe in Conservative hands.

Though the claim that the health service as a whole could be up for sale after Brexit is overstated, Labour is hoping to tap into concerns that the Conservatives will be looking for a bigger role for the private sector in the NHS's future.

The leaked documents do bolster Labour's claim that health care could be a bargaining chip in U.S.-U.K. trade talks. At present, the NHS can often negotiate low prices from drug companies because it is so big.

In future negotiations the U.S. could try to demand during trade talks that Britain pay American pharma firms more for drugs. It could also push for extended patents that would prevent Britons buying cheaper generic versions of U.S.-patented drugs -- something that happened in talks on a U.S.-Mexico-Canada trade deal.

Corbyn cited the drug Humira, which is used to treat a variety of ailments, including rheumatoid arthritis and Crohn's disease. He said the NHS pays 1,409 pounds ($1,814) a packet, way lower than the equivalent price in the United States of 8,115 pounds.

"We are talking here about secret talks for a deal with Donald Trump after Brexit. A deal that will shape our country's future," he said.

The documents also suggested that a post-Brexit deal between the U.K. and the EU that kept Britain closely aligned with the European economy would come at the cost of a special free trade agreement with the United States.

According to the documents revealed by Corbyn, the U.S. trade representative made clear that a U.K. commitment to the EU's customs union and single market would make a U.K.-U.S. free trade agreement "a non-starter."

Labour was struggling to push the focus of the election onto domestic issues and away from allegations that Corbyn -- a longtime champion of the Palestinians -- has allowed anti-Jewish prejudice to fester in the left-of-centre party.

On Monday, Chief Rabbi Ephraim Mirvis accused Corbyn of allowing the "poison" of anti-Semitism to take root in his party and said "the very soul of our nation is at stake" in the Dec. 12 election.

Corbyn condemned anti-Jewish prejudice and said he was rooting it out of the party -- but declined four times during a BBC television interview Tuesday to apologize to British Jews.

While Johnson says Corbyn's record on anti-Semitism makes him unfit to lead the country, the prime minister has been accused of making racist remarks and of failing to check anti-Muslim prejudice in Conservative ranks.

Johnson said Wednesday he was sorry for any "hurt and offence that has been caused" by Islamophobia in the party.

Sayeeda Warsi, a former co-chairwoman of the Conservative Party who now sits in the House of Lords, said Johnson's words were "a good start." But she said the party had dragged its feet on confronting anti-Muslim prejudice.

"Indeed, we saw that when Boris made those crass comments around Muslim women wearing the niqab, that many Muslim women, visibly Muslim women, were subsequently attacked on our streets," Warsi told the BBC.

Johnson hopes to secure a majority in the election so he can get Parliament to ratify the Brexit divorce deal he negotiated last month with the EU. Under the terms of that deal, the U.K. would leave the EU on Jan. 31 but remain in the European single market and the customs union until the end of 2020.

After Brexit, Britain and the EU will begin discussions on their future relationship. Johnson has insisted that he will be able to secure an agreement by the end of 2020 -- a timescale that many trade experts find unrealistic.

In a letter published in the Daily Telegraph on Wednesday, a dozen trade experts accused U.K. politicians of setting "arbitrary deadlines" and making unrealistic promises about future trade deals.

The letter, whose signatories include Alan Winters of the U.K. Trade Observatory and David Tinline, a former senior adviser to the World Trade Organization's director-general, said that "if the U.K. wants to benefit from high quality trade deals and to lead on the global stage, a major shift in approach is required. It's time to get serious."