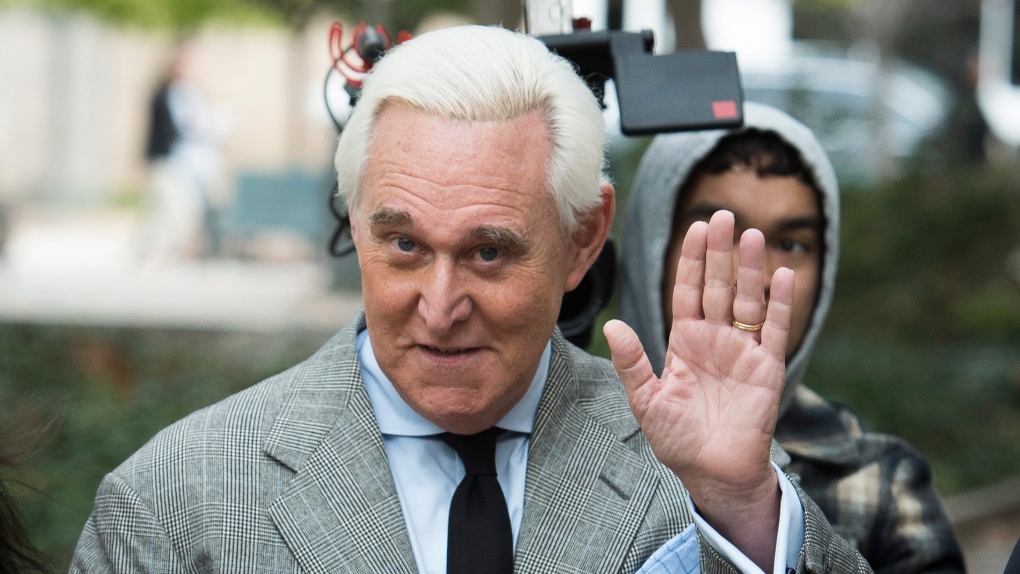 In this Nov. 7, 2019 file photo, Roger Stone arrives at Federal Court for his federal trial in Washington. (AP Photo/Cliff Owen)

WASHINGTON -- A federal judge on Tuesday refused to delay sentencing for Republican political operative Roger Stone, setting up a crossroads moment later this week in an extraordinary case marked by a mini-revolt inside the Justice Department and allegations of interference by U.S. President Donald Trump.

Stone was convicted in November of a seven-count indictment that accused him of lying to Congress, tampering with a witness and obstructing the House investigation into whether the Trump campaign co-ordinated with Russia to tip the 2016 election. He is scheduled to be sentenced Thursday.

Stone's defence team has requested a new trial and unsuccessfully lobbied Judge Amy Berman Jackson on Tuesday to delay sentencing until she rules on that motion. On the government side, a new set of attorneys took over the case after the entire prosecution team resigned last week following Attorney General William Barr's decision to overrule their recommendation that Stone serve at least seven years in prison.

Barr later said in an ABC News interview that he had not been asked by Trump to look into the case but that the president's tweets were making it "impossible" for him to do his job.

Trump kept up his Twitter defence of Stone on Tuesday, before Jackson refused to delay sentencing.

"Everything having to do with this fraudulent investigation is badly tainted and, in my opinion, should be thrown out," Trump tweeted Tuesday morning. He also tweeted a quote from Fox News commentator Andrew Napolitano, saying that the Stone jury appears to have been biased against Trump, referencing Judge Jackson by name and claiming "almost any judge in the country" would throw out the conviction.

Asked later about whether he was planning to pardon Stone, Trump told reporters at Andrews Air Force Base outside Washington. "I haven't given it any thought. .... but I think he's been treated very unfairly."

Trump praised Barr as "a man with great integrity," but the president also indicated that he planned to maintain the same Twitter presence even if it puts his attorney general in uncomfortable situations.

"I do make his job harder. I do agree with that," Trump said. "Social media for me has been very important because it gives me a voice. Because I don't get that voice in the press, in the media."

Earlier Tuesday, at U.S. District Court, Jackson, with Stone present on speaker phone from his lawyer's office, ruled that delaying Thursday's sentencing "would not be a prudent thing to do."

However, the judge also indicated she would delay the execution of the sentence, pending resolution of the motion for a new trial. Any sort of a jail sentence seems likely to draw a public rebuke from Trump, who maintains that Stone's entire case is just an aspect of the ongoing "witch hunt" against him and his allies by bitter Democrats and the "deep state" inside the FBI and the Justice Department.