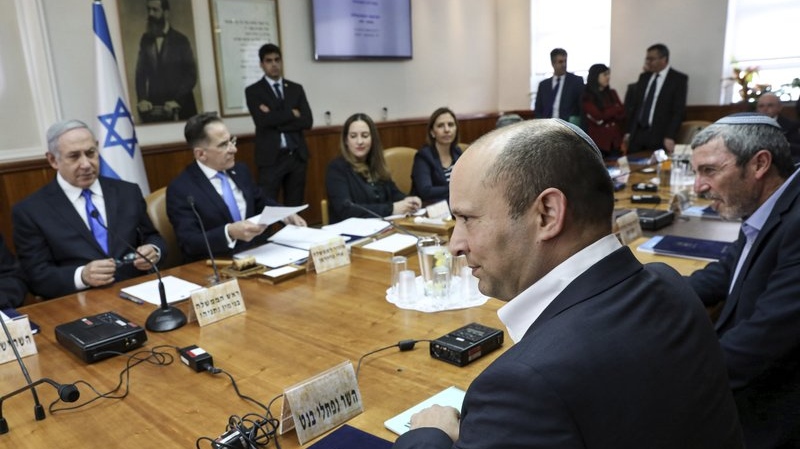 JERUSALEM -- The Israeli military said it intercepted four incoming rockets from Syria on Tuesday and explosions were heard shortly after that in Damascus, a week after another Israeli strike targeted a top Palestinian militant in the Syrian capital.

Israeli air defence systems captured the projectiles, the military said, and no harm was caused to Israeli communities in the Golan Heights after warning sirens awoke residents there early in the morning. There was no immediate official comment from Syria but the SANA state news agency reported explosions were heard near Damascus International Airport, indicating a potential Israeli retaliatory strike.

The Israeli military would not comment on the explosions in Syria, but Defence Minister Naftali Bennett was convening the top military brass in Tel Aviv to discuss the latest developments.

Speaking on Israel Army Radio, Foreign Minister Israel Katz was equally vague, saying only that "Israel will act in the way it sees fit."

The Britain-based Syrian Observatory for Human Rights said Israel targeted posts southwest of Damascus with five missiles, adding that Syrian air defences shot down some of the missiles. The war monitor said Lebanon's Hezbollah fighters are active in the area that was struck and that there was no immediate word on casualties.

The Observatory said the area targeted near Damascus is where the four missiles were fired from earlier toward the Golan Heights.

The rare rocket fire comes a week after an Israeli airstrike against a top Palestinian militant based in Syria. Akram al-Ajouri, a member of the leadership of the militant Islamic Jihad group who is living in exile, survived the attack but his son and granddaughter were killed.

Israel frequently strikes Iranian interests in Syria. But last week's airstrike appeared to be a rare assassination attempt of a Palestinian militant in the Syrian capital. It came the same day as another Israeli airstrike killed a senior Islamic Jihad commander in Gaza, settling off the fiercest round of fighting there in years.

It all comes amid heightened tensions between Israel and Iranian proxies along its borders. Israeli Prime Minister Benjamin Netanyahu has issued a series of warnings recently about Iranian aggression throughout the Middle East.

Iran has forces based in Syria, Israel's northern neighbour, and supports Hezbollah militants in Lebanon. In Gaza, it supplies Islamic Jihad with cash, weapons and expertise.

Netanyahu also has claimed Iran is using Iraq and far-off Yemen, where Tehran supports Shiite Houthi rebels at war with a Saudi-led coalition backing the government, to plan attacks against Israel. Hamas also receives some support from Iran.

At the same time, Iran's regional influence is being challenged by unprecedented, economically-driven mass protests in Iraq and Lebanon -- two countries where Tehran wields major influence. The protests are creating unrest that Tehran fears would spark a backlash against Iran-backed proxy militias in those countries.

Iran's Supreme Leader Ayatollah Ali Khamenei has accused the U.S. and its regional allies of fomenting the Iraq and Lebanon unrest.