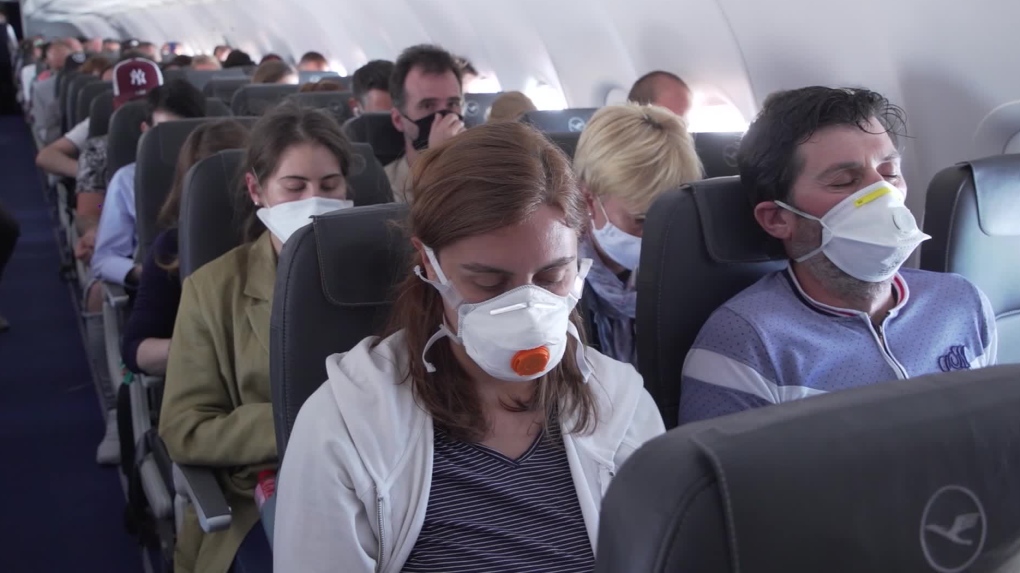 Stephanie Scherrer was settling in for her two-hour Southwest Airlines flight from Denver, Colorado to her home in Los Angeles, California. Her face covering was on, her hand sanitizer was ready, she'd wiped down the seats and her two kids were also masked up.

It was July 15. Scherrer, a high school counsellor, had thought long and hard about whether she felt safe flying during the Covid-19 pandemic, researching driving routes and poring over airline policies. But she was reassured by Southwest's compulsory mask rule, plus its pledge to keep the middle seats open.

The aircraft had left the gate when Scherrer says she spotted a commotion several rows ahead: a flight attendant was confronting a man and a woman who were refusing to wear face masks.

"I hear him saying: 'Well, there's going to be a lot of lawsuits," Scherrer tells CNN.

The flight attendant, Scherrer says, reiterated the rules and the couple continued to refuse to comply.

"I got mad, because I feel like people wear masks for my safety. I'm wearing one for theirs," Scherrer says.

The next thing she knew, the aircraft was returning to the gate.

"At that point, people started getting angry, because I think they realized that we weren't taking off on time, because they needed to take care of this."

Scherrer says a Southwest employee boarded the airplane and started talking to the passengers in question.

"And as soon as that happened, it kind of opened the floodgates of other people going, 'I can't believe that you were so rude. Why? Why couldn't you just wear a mask?'

Scherrer couldn't hear everything transpiring, but she could see things were escalating. She took out her cell phone and started to record the incident.

In her video, supplied to CNN, one passenger is heard saying they will not wear a mask because "it's against my constitutional right."

The situation concluded with the Southwest representative asking the couple to deplane. Once they had disembarked, the remaining passengers applauded the air crew and Scherrer breathed a sigh of relief.

Southwest Airlines declined to comment on the incident, pointing CNN towards its no exceptions mask policy, which the airline said is made clear to passengers during booking, a pre-trip email and the check-in process.

Back in the spring, as COVID-19 induced lockdowns hit the United States and Europe, many airplanes were flying at severely reduced capacity as travel plans were canceled and people retreated into their homes.

But this last weekend, the U.S. Transportation Security Administration reported airport security checkpoint traffic had reached a new high, crossing 800,000 for the first time in the pandemic.

It's still far less than before -- 31% of the equivalent 2019 numbers, when the TSA saw over 2.6 million people on the same day last year.

But the figures suggest passengers are returning to the skies and airlines -- amid reports of job uncertainty and continuing fears about the spread of coronavirus -- are trying to operate as smooth and hassle-free an experience as possible.

And the past few years have seen more visible episodes of air rage -- a term used for disruptive and unruly passenger behavior from passengers getting aggressive with air crew, refusing to comply with flight regulations, fighting with another flier or even, in the most extreme situations, trying to enter the flight deck or open the emergency exit door.

However, the data isn't comprehensive: not every global airline is part of IATA -- and not every incident is going to be recorded. Plus, the Federal Aviation Administration, which compiles statistics for US flights, suggests numbers were down from 2018 to 2019.

But one thing's for certain, now that almost everyone carries a smart phone, we've seen more and more videos of brawling passengers splashed across social media, which has drawn further attention to the issue.

COVID-19 has changed the face of flying, with passenger tensions possibly higher than ever due to fears surrounding the virus. New regulations such as compulsory face masks add to the list of potential points of conflict.

An IATA representative told CNN that the group didn't have any statistics on unruly passenger data since March and that unruly passenger incidents "are still a tiny percentage of overall flights."

"We are aware of a very small number of instances where passengers have not complied with these requirements," added the representative.

Malis recalls flights she worked on earlier in the year which should've had 160 passengers and instead carried just 20. It was easier, she says, to socially distance back then.

Now, numbers are rising and, says the flight attendant, so is the potential for more problems.

Malis says that the Association of Professional Flight Attendants has been advocating masks on aircraft since January, when COVID-19 first surfaced in China.

The policy has evolved over time and mask wearing is now compulsory for all crew and passengers over the age of two.

"If you are not able or not willing to wear a mask, we ask that you find another mode of transportation to get to where you need to go," says Malis. "I think flight attendants feel like we have a responsibility during this pandemic to do what we can to stop the spread."

Malis has worked as a flight attendant for several years and she's become used to dealing with potentially difficult passenger interactions.

There's always the worry about a passenger assaulting a crew member -- which has added implications in the age of coronavirus.

Malis is also concerned about incidents being videoed.

"You never know when you're being recorded and when any type of video could be taken out of context," she says.

During a flight, passengers can take off their mask to eat and drink. Sometimes, notes Malis, travelers might genuinely forget to put the face covering back on afterwards.

Other times, they could be using this policy to attempt to beat the system. It's a flight attendant's job to mitigate these situations.

Once the airplane has taken off, the flight won't divert if someone takes off their mask -- unless the incident derails further -- but Malis says staff will take names and politely remind customers to comply.

"The company is supposed to follow up with those customers and figure out what the situation was, and possibly deny future travel," she says.

Delta recently told CNN that "well over 100 people" have refused to wear a face covering for the duration of the journey and been subsequently banned from flying on the carrier.

Malis says one of the difficulties is that, in the US, there is no blanket rule for face coverings on flights. The FAA hasn't issued a federal requirement, so it is up to individual US airlines to decide their policy and what, if any, exceptions they make to the rule.

For many carriers, the no exceptions rule now extends to those with medical conditions.

CNN affiliate KRPC reported that Southwest Airlines recently removed a passenger and her three-year-old son from a Monday flight after the boy, who has autism, refused to wear a face mask and became upset.

In a CNN interview on Wednesday, Southwest CEO Gary Kelly emphasized the no-exceptions policy when asked about the incident.

"What we have concluded is there shouldn't be any exceptions, because the exception could be someone who has the virus," Kelly told CNN's Poppy Harlow.

"I'm very empathetic. I'm a grandfather. I have small grandchildren and I know how kids can be, but it's just a matter of making sure that it's a safe environment for everyone including all those families."

THE ROLE OF ALCOHOL

One of the prevailing worries among air crew is that unruly passengers could get aggressive.

Passenger Scherrer said the situation she observed didn't become violent, but other passengers were getting increasingly irritated.

"I just felt like people were getting frustrated -- I think everybody's nervous about the pandemic, or you think they are," she says.

Air crew are trained to deal with aggressive or violent incidents and aim to de-escalate any situation that has the potential to go in that direction.

Earlier in August, two passengers on board a KLM flight from Amsterdam were arrested after they refused to wear face masks and became unruly.

On KLM flights, passengers can be exempt from wearing face masks due to medical reasons.

KLM spokesperson Paul Weber told CNN the travelers were drunk and began "troubling other passengers physically and verbally." They were detained by the captain on board and then arrested by local authorities when the flight landed.

Historically, the role of alcohol is often cited as a factor in air rage incidents, in the wake of COVID-19 several airlines banned alcohol on flights -- although some have since reinstated alcoholic drink options, and this doesn't stop passengers stocking up on booze before they board.

VIEW FROM THE COCKPIT

Passengers refusing to comply with regulations can be concerning for fellow travelers and air crew, but what's it like for the people in the cockpit?

Pilot Anny Divya commands a Boeing 777 for Air India. When she started her role a few years ago, she was the youngest female commander of a Boeing 777 aircraft in the world.

"There's nothing normal anymore about flying," says Divya, speaking from her home in India before piloting a flight to Chicago. "It's difficult for everyone."

Like her passengers, Divya wears a mask while transiting through the airport, boarding the plane and, often, while flying the aircraft.

It's possible to social distance with two people in the cockpit, so pilots are permitted to take them off for a while, but Divya still describes face coverings as having "become part of our life."

"In the beginning, it was uncomfortable breathing," she recalls. "Now, without even knowing, we do have masks on most of the time without even realizing it."

Divya has been flying throughout the pandemic, repatriating passengers and delivering medical supplies.

Meanwhile Italy-based pilot Lindy Kats, who flies the Boeing 717 for a European airline, says she only recently returned to the skies after Italy's lockdown began to lift.

Kats, who flies short haul journeys across the Mediterranean, says she stays in constant communication with the air crew about any incidents on the aircraft.

"If a passenger is already aggressive on the ground, it can become a bigger issue when taking off," she explains.

"It's important for the cabin crew to indeed realize, is this passenger calm enough to stay on board? And otherwise other precautions have to be taken, unfortunately."

Kats acknowledges that flying can be stressful, even disregarding the current COVID-19 threat.

"There's never an excuse for being aggressive. But yes, I can understand how someone can be triggered by multiple things that are accumulating, adding to stress," she says. "And then maybe one little thing can be the drop that makes the bucket flow over."

Overall, both Kats and Divya say passengers have been largely compliant with the new restrictions.

From the flight attendant perspective, Malis also says most passengers have been appreciative and understanding, with travelers recognizing the risk now inherent to working on an aircraft.

She hopes that a more uniform policy is implemented by the US government, which she feels could make the situation "less confusing for everyone."

"And that flight attendants and all the other other aviation workers have a job to come back to after this pandemic."