House Dems to outline case for removing Trump from office 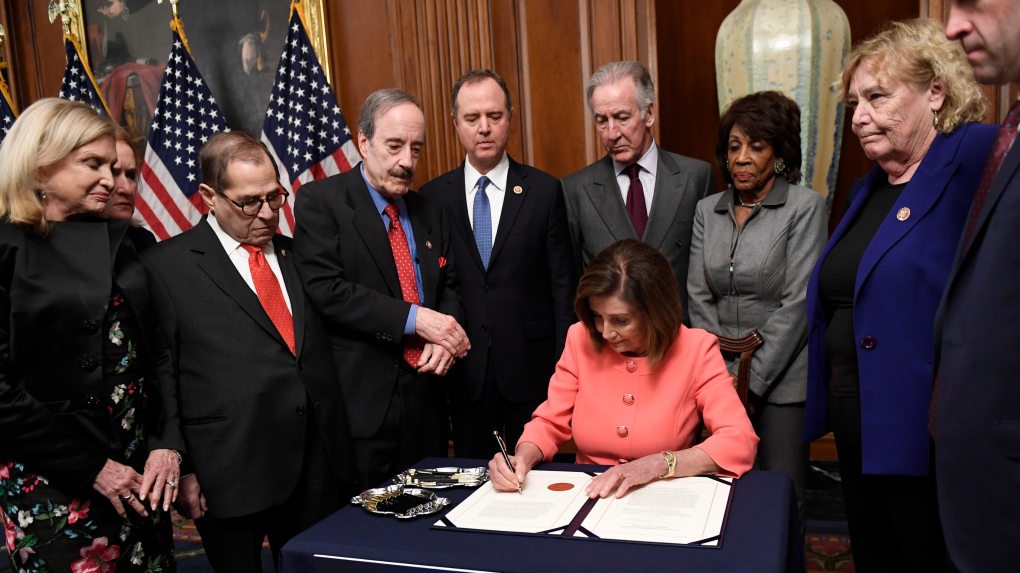 In this Jan. 15, 2020 file photo, House Speaker Nancy Pelosi of Calif., signs the resolution to transmit the two articles of impeachment against U.S. President Donald Trump to the Senate for trial on Capitol Hill in Washington. (AP Photo/Susan Walsh)

WASHINGTON -- House Democrats were preparing to outline their case for removing U.S. President Donald Trump from office in a legal brief due Saturday, as opposing sides in the impeachment case look ahead to the opening of the historic trial in the Senate.

Trump on Friday appointed several nationally known lawyers to the team that will defend him in the proceedings, set to open Tuesday afternoon.

The submission of the legal brief, due by 5 p.m. Saturday, follows the latest revelations in the case against Trump.

It also included messages between Parnas and a staff member for Rep. Devin Nunes, R-Calif., a Trump ally who opposes the president's impeachment by the House. Parnas appeared to be connecting the staff member to Ukrainian officials who pushed unfounded corruption allegations against former Vice-President Joe Biden.

The document release followed Thursday's announcement by the Government Accountability Office that the White House violated federal law by withholding congressionally approved security aid to Ukraine, which shares a border with a hostile Russia.

In response, the White House disagreed and said it does not have to follow decisions by the accountability office because it is an arm of Congress. White House officials also have noted that Trump eventually sent the $400 million in aid to Ukraine.

But the GAO report and Parnas documents intensified the pressure senators have been under to call more witnesses for the trial, a major source of disagreement between Democrats and Republicans that has yet to be resolved. The White House has instructed officials to disregard subpoenas from Congress seeking for them to appear as witnesses or turn over documents or other information.

Trump on Friday named Ken Starr, the prosecutor whose investigation two decades ago led to the impeachment of President Bill Clinton, along with former Harvard Law professor Alan Dershowitz, to his defence team.

The additions bring experience in the politics of impeachment as well as constitutional law to Trump's made-for-TV legal team. Both Starr and Dershowitz have been fixtures on Fox News Channel, Trump's preferred television network.

Dershowitz said he will deliver constitutional arguments defending Trump from allegations that he abused his power. Trump is also accused of obstructing Congress as it sought to investigate pressure he applied on Ukraine's president to announce an investigation into Trump's political rivals as the president withheld the security aid and a White House meeting as leverage.

Trump says he did nothing wrong and argues that Democrats have been out to get him since before he took office.

A legal brief from the White House laying out the contours of Trump's defence was due by noon Monday, and White House attorneys and Trump's outside legal team have been debating just how political the document should be.

Some in the administration have echoed warnings from Senate Majority Leader Mitch McConnell, R-Ky., that the pleadings must be sensitive to the Senate's more staid traditions and leave some of the sharper rhetoric exhibited during the House proceedings to Twitter and cable news.

Dershowitz is a constitutional expert whose expansive views of presidential powers echo those of Trump. Starr is a veteran of Washington's partisan battles after leading the investigation into Clinton's affair with a White House intern. The House impeached Clinton, who then was acquitted at his Senate trial. Trump is expecting the same outcome from the Republican-led chamber.

Dershowitz sought to play down his role in the case in the hours after he was named to the team, saying he would be present for just about an hour to make the constitutional arguments.

"I'm not a full-fledged member of the defence team," he told "The Dan Abrams Show" on SiriusXM.

White House lawyers succeeded in keeping Trump from adding House Republican lawmakers to the defence team, but they also advised him against tapping Dershowitz, according to two people who spoke on condition of anonymity to discuss internal discussions. They're concerned about the professor's association with Jeffrey Epstein, the financier who killed himself in a New York City jail cell last summer while awaiting trial on sex trafficking charges.

A Fox News host said on the air that Starr would be parting ways with the network as a result of his role on the legal team.

Other members of Trump's legal defence include Pam Bondi, the former Florida attorney general; Jane Raskin, who was part of the president's legal team during Mueller's investigation; Robert Ray, who was part of the Whitewater investigation of the Clintons; and Eric D. Herschmann of the Kasowitz Benson Torres legal firm, which has represented Trump in numerous cases over the last 15 years.

Giuliani, a former New York-based federal prosecutor, told The Associated Press the president had assembled a "top-notch" defence team and he was not disappointed at being excluded from it.

Giuliani, who many in the White House blame for leading Trump down the path to impeachment by fueling Ukraine conspiracies, had previously expressed interest in being on the legal team. But he said Friday his focus would be on being a potential witness.

Trump was impeached by the House in December. Senators were sworn in as jurors Thursday by Chief Justice John Roberts, who will preside over the trial.

Starr, besides his 1990s role as independent counsel, is a former U.S. solicitor general and federal circuit court judge.

More recently, he was removed as president of Baylor University and then resigned as chancellor of the school in the wake of a review critical of the university's handling of sexual assault allegations against football players. Starr said his resignation was the result of the university's board of regents seeking to place the school under new leadership following the scandal, not because he was accused of hiding or failing to act on information.

Dershowitz's reputation has been damaged in recent years by his association with Epstein. One of Epstein's alleged victims, Virginia Roberts Giuffre, has accused Dershowitz of participating in her abuse. Dershowitz has denied it and has been battling in court for years with Giuffre and her lawyers. He recently wrote a book, "Guilt by Accusation," rejecting her allegations.

Giuffre and Dershowitz are also suing each other for defamation.