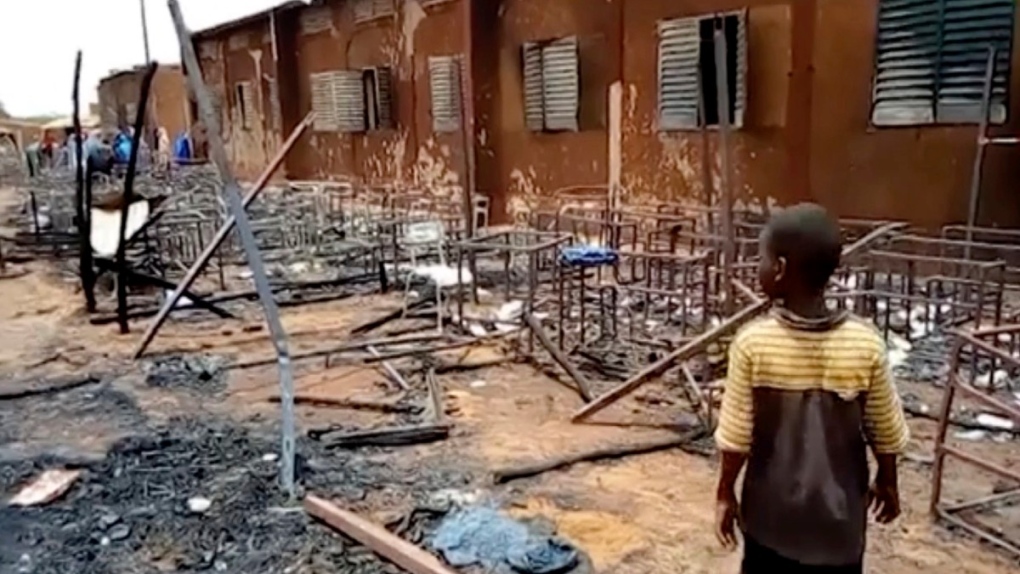 Burnt chairs, tables and other objects in the school, in Niamey, Niger, on April 14, 2021. (Boureima Issoufou / AP)

The pupils -- between the ages of 7 and 13 -- were attending class at the time the blaze erupted around 4 p.m. on Tuesday. Authorities said the fire spread quickly through the school grounds, where some 2,000 students attend classes.

Straw huts that housed some of the school's classrooms outdoors were completely burned, while there was significant damage to the building itself. Destroyed classroom furniture lay scattered in ash on Wednesday.

"It was a disaster," said Oumarou Gounssa, the director of the school. "Never in Niger have we seen a fire like that in a school, and it was during school hours. We are truly sorry about the loss of lives."

Parents were still waiting for their children's remains to be returned, Elh Abass Souley, whose two sons died in the fire, said. The inferno spread so quickly that one mourning father, who identified himself only by his first name, Abdoulaye, said the fire had already destroyed the classrooms by the time firefighters arrived at the scene.

The cause of the fire was under investigation and it was not immediately known where it started. However, teachers and parents said Wednesday that the deaths highlight the dangers of temporary classrooms set up outside. Straw huts are often used to make room for students in overcrowded schools.

"It is important that from here that the authorities stop the classes in straw huts," the National Union of Teachers of Niger said in a statement.