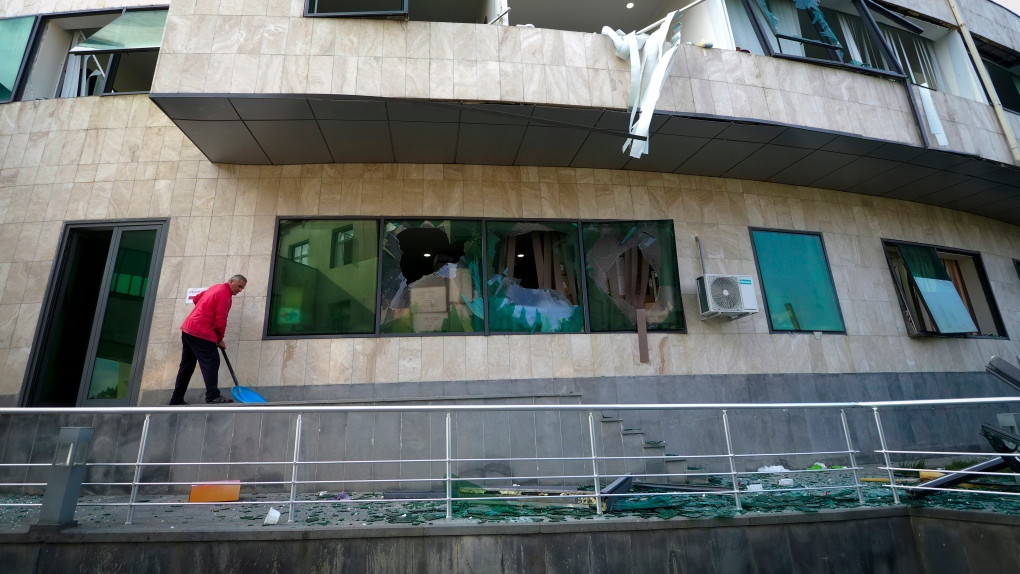 A man removes debris at a hospital damaged by shelling by Azerbaijan's artillery in Stepanakert, the separatist region of Nagorno-Karabakh, Wednesday, Oct. 28, 2020. (AP Photo)

TORONTO -- As fighting rages on between Armenian and Azerbaijani forces over the separatist region of Nagorno-Karabakh with civilian casualties on both sides, a genocide emergency alert has been issued for the conflict by a non-profit organization that tracks genocides around the world.

Last week, Genocide Watch first issued the alert and said it was “due to Azerbaijan’s aggression against the Armenian Republic of Artsakh, usually called by its Soviet name, Nagorno-Karabakh.”

According to the Washington-based organization, which works with global partners to predict and prevent genocides, the Armenian population living in the disputed Nagorno-Karabakh region are at risk of genocide by Azerbaijani forces.

Gregory Stanton, the founding president and chairman of Genocide Watch, explained that the organization considers Azerbaijan to be at the “Stage 9: Extermination” and “Stage 10: Denial” levels of their “Ten Stages of Genocide.”

“What we’ve got here is a genocide emergency because we’ve got actual attacks by Azerbaijan and we’ve got a persecution of the group in a very real way in that you’ve got forced displacement in a sense because a lot of the Armenian population of Nagorno-Karabakh has fled,” he told CTVNews.ca during a telephone interview from Northern Virginia on Wednesday.

Up to 1.5 million Armenians were killed during a First World War-era genocide during the collapse of the Ottoman Empire. While Turkey still refuses to recognize the event as a genocide more than a century later, some 30 countries have recognized it as such, including Canada. Both the US Senate and House of Representatives have passed resolutions recognizing the Armenian Genocide, but the executive branch has not.

While Stanton said they have evidence that most of the war crimes are being committed by the Azerbaijanis, he said that no side is innocent in this conflict. He said the current prime minister of Armenia, Nikol Pashinyan, is responsible for setting off some of the conflict by claiming that Nagorno-Karabakh is part of Armenia.

Nagorno-Karabakh is internationally recognized as part of Azerbaijan, but the area has been under the control of ethnic Armenian forces backed by Armenia since the 1988-94 war between the two sides ended.

Although a ceasefire was declared in 1994, the two countries have been locked in a stalemate over the territory. The latest fighting, which began in late September, has been the most intense since the war ended with hundreds and possibly thousands of people killed, according to The Associated Press.

“The fact that, you know, that [Prime Minister] Pashinyan of Armenia made these, I think, unwise claims… well it was like poking the Azerbaijanis in the eye,” Stanton said.

"This is something that really needs to be resolved peacefully.”

Frank Chalk, a history professor at Concordia University in Montreal and a board member of Genocide Watch, said that both sides of the conflict have been targeting civilians.

“The civilians are suffering more than soldiers from all the reports that we’ve received. So the genocide warning that was issued actually speaks more of crimes against humanity at the moment and that includes principally the targeting of civilians,” he said during a telephone interview with CTVNews.ca on Tuesday.

Chalk believes he sees the “early warning signs” of a genocide in Nagorno-Karabakh, but he doesn’t think there is one at the moment.

“A genocide may be over the horizon and the world needs to pay much more attention to stopping the fighting and to bringing about a peaceful resolution of the dispute,” he said. “But I don’t think we’re at the stage of extermination.”

As for the peaceful resolution that both Stanton and Chalk have called for, Neil Hauer, a Canadian journalist stationed in Armenia who has been covering the conflict since it began, said that there needs to be some international “buy in” to happen before the fighting will stop.

“Not just, you know, bring these guys to the table and have them agree to something with no international monitors or anything present,” he told CTVNews.ca during a telephone interview from Armenia on Wednesday.

Hauer said he thinks Russia will have a key role in establishing peace in the region because he said they are the only international actor with assets in place on the ground to enforce a ceasefire at the moment.

There have been two attempts at a ceasefire over the past month by Russia and a third attempt brokered by the U.S. over the weekend. All of the agreements have broken soon after their conceptions after reports of violations on both sides.

Hauer said if the fighting continues and Azerbaijan captures Nagorno-Karabakh militarily, he believes there will be mass ethnic cleansing of Armenians there. He said that is why it’s so important for the international community to become involved to help enforce a lasting peace agreement on the ground.

Stanton agrees that international intervention is necessary, which is why he said Genocide Watch is calling for Russia and the U.S. to broker a peace agreement with Armenia and Azerbaijan and for the creation of a United Nations peacekeeping force to be positioned in the disputed territory.

“What it takes is political will,” he said.

With files from The Associated Press and AFP