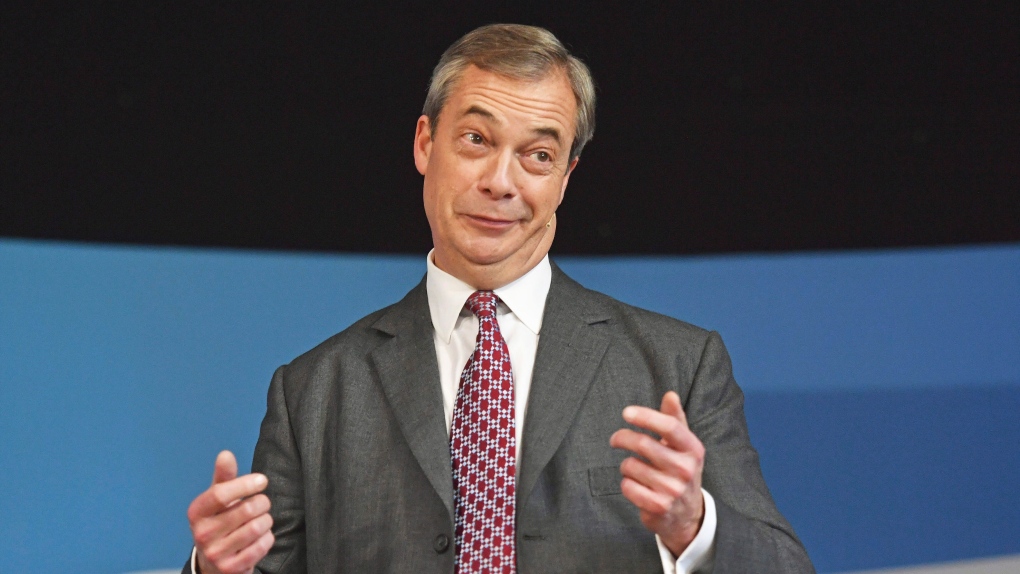 LONDON -- LONDON -- One week before Britain votes in a national election, fractures were emerging Thursday within jittery political parties unsure how a volatile electorate will judge them.

The Brexit Party led by Nigel Farage, which became the U.K.'s top party in European elections earlier this year, saw four senior officials quit with a broadside accusing Farage of putting Britain's exit from the European Union at risk.

Appearing on "This Morning" -- a cozy morning chat show -- Johnson was asked about a 1995 magazine article in which he called the children of single mothers "ill-raised, ignorant, aggressive and illegitimate."

"You must be able to understand how hurtful that is to someone's feelings," host Holly Willoughby said.

Johnson swerved the question, saying "I don't think this is the time to talk about articles that were written a very long time ago."

Johnson has made offensive comments much more recently, including a newspaper column last year in which he called Muslim women who wear face-covering veils "letter boxes."

Asked about that and other comments, Johnson has said he's sorry if his words caused hurt -- but hasn't apologized for writing them.

All 650 seats in the House of Commons are up for grabs next week when voters will pass judgment on an ill-tempered and divisive election.

Johnson pushed for the December vote, which is taking place more than two years early, in hopes of winning a majority and breaking Britain's political impasse over Brexit. He says that if the Conservatives win a majority, he will get Parliament to ratify his Brexit divorce deal and take the U.K. out of the EU by the current Jan. 31 deadline.

Labour says it will negotiate a new Brexit deal, then give voters a choice between leaving on those terms and remaining in the bloc. It also has a radical domestic agenda, promising to nationalize key industries and utilities, hike the minimum wage and give free internet access to all.

Labour's campaign has been dogged by allegations that leader Jeremy Corbyn -- a long-time champion of the Palestinians -- has allowed anti-Jewish prejudice to fester in the left-of-centre party.

On Thursday, the Jewish Labour Movement group campaigning group, said it had compiled sworn statements from 70 present and former Labour members and staffers. They include allegations of verbal and online abuse of Jewish members and claims that party officials blocked complaints being properly investigated.

The statements have been submitted to the Equalities and Human Rights Commission, which is investigating alleged anti-Semitism in the party.

Sam Matthews, a former head of Labour's legal department, said he and his team had not received "support from those above us to tackle the problem effectively."

"Anti-Semitism, Holocaust denial and bullying -- bullying those who fight anti-Semitism -- are now commonplace," he told reporters.

Corbyn has called anti-Semitism "a poison and an evil in our society" and says he is working to root it out of the party.

Corbyn said Thursday that when he became Labour leader in 2015, "there were no processes in place to deal with anti-Semitism."

But many British Jews are skeptical of his claims. Last week, Britain's Orthodox Chief Rabbi, Ephraim Mirvis, said that "the very soul of our nation is at stake" in the election. He said Corbyn and his allies had failed to stop anti-Jewish prejudice and "hounded" those who tried to challenge it.

Johnson's Conservatives are ahead in opinion polls, but analysts say this election is particularly hard to predict because Brexit cuts across traditional party divides. The 2016 referendum on Britain's EU membership split the country into two camps: "leavers" and "remainers."

The Conservative lead suggests the party has managed to win over many Brexit-backing voters, while Labour faces competition for pro-EU electors from the centrist Liberal Democrats and several smaller parties.

Johnson has campaigned relentlessly on a vow to "get Brexit done" by leaving the EU on Jan. 31 -- even though that will only trigger the start of months or years of complex trade negotiations with the bloc.

Conservative consolidation of the pro-"leave" vote continued Thursday when four Brexit Party representatives quit the party to sit as independents in the European Parliament.

The four, who were among 29 Brexit Party members elected to the European legislature in May, accused Farage of putting Britain's EU exit at risk by siphoning pro-Brexit votes from the Conservatives.

The Brexit Party is not running in 317 Conservative-held seats, but is fielding candidates in about 300 other constituencies.

One of the four, Annunziata Rees-Mogg, said "I find it absolutely unbelievable but tragic that the Brexit Party, with so many wonderful people dedicated to a cause, are now the very party risking Brexit."

The Brexit Party was founded earlier this year to campaign for a definitive break with the European Union, arguing that the divorce terms secured by the government kept Britain too closely aligned to the bloc's rules. It won 30% of British votes in May's European Parliament election. But it holds no seats in Britain's Parliament, and has been hobbled by infighting over whether to form an alliance with Johnson's Conservatives.