Explained: Why the Dow topped 30,000 for the first time 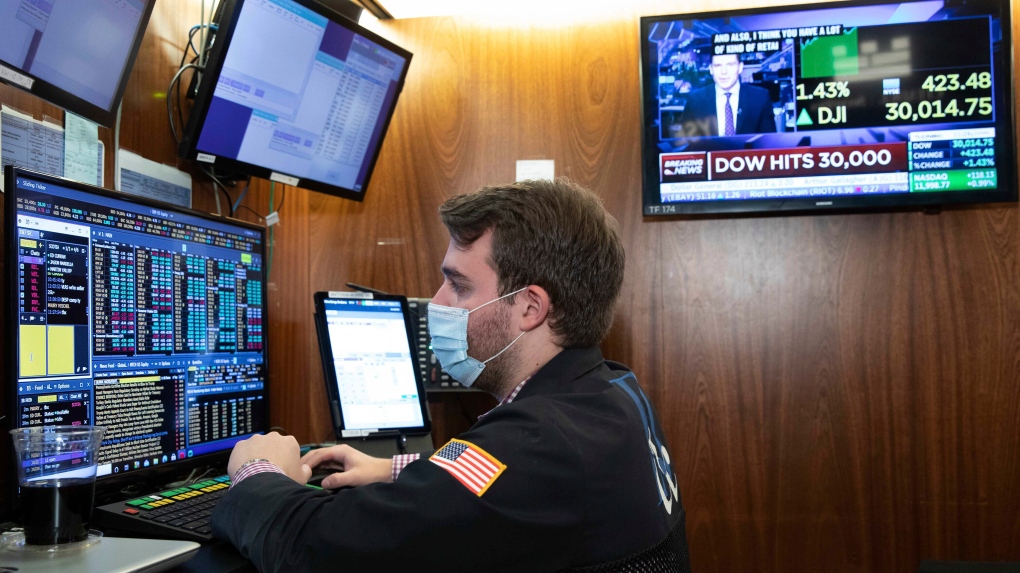 A trader at the New York Stock Exchange works at his terminal, Tuesday, Nov. 24, 2020. (Nicole Pereira/NYSE via AP)

The Dow rose 454.97 points, or 1.5%, to close at 30,046.24. Investors were encouraged by progress in the development of coronavirus vaccines and news that the transition of power to President-elect Joe Biden is finally beginning. Traders also welcomed word that Biden has selected Janet Yellen, a widely respected former Federal Reserve chair, as treasury secretary.

The milestone is an attention-grabbing psychological threshold, and it's an encouraging signal that the market's rally is broadening beyond the handful of stocks that carried Wall Street through the pandemic. But the Dow at 30,000 means less to most investors' 401(k) accounts than the fact that broader market indexes are also at record highs.

Here's a look at how the Dow has rallied to its latest multiple of 10,000, the first time that's happened since January 2017, and what it means for investors.

WHAT IS THE DOW, EXACTLY?

It's a measure of 30 companies, mostly blue-chip stocks spread across a range of industries. They include tech stars like Apple and Microsoft, as well as more traditional industrial companies like Boeing and Caterpillar. Other behemoths in the Dow include Nike and The Walt Disney Co.

Unlike many other measures of the market, the most important thing for the Dow is how big a stock's price is, not how much a company is worth in total. That means a 1% move for UnitedHealth Group has a bigger effect on the Dow than the same movement for Apple, even though Apple is worth more than six times the insurer. That's because UnitedHealth Group's stock price is US$336.01 versus $115.17 for Apple, due to having a smaller number of total shares.

It's just an arbitrary number, and it doesn't mean things are much better than when the Dow was at 29,999. What's more impactful is that the Dow has finally clawed back all its losses from the pandemic and is once again reaching new heights. It is up 61.5% since dropping below 18,600 on March 23.

It took just over nine months for the Dow to surpass the record it had set in February, before panic about the coronavirus triggered the market's breathtaking sell-off.

WHAT GOT THE DOW THIS HIGH?

The Dow's rocket ride to 30,000 got big boosts from the Federal Reserve, which slashed short-term interest rates back to roughly zero and took other measures to stabilize financial markets, and Congress, which came through with trillions of dollars of financial aid for the economy.

The economy has improved since the pandemic's initial shock. For instance, claims for unemployment benefits dropped from 6.9 million in March to 742,000 last week. Company profits didn't tank as much as initially feared. And the possibility that a COVID vaccine could begin distribution by the end of the year has recently given the market more reason to be optimistic.

Among individual companies, Apple did much of the heavy lifting early in the Dow's recovery after its price soared nearly $275 to above $500 by late August. A four-for-one stock split on Aug. 28 cut Apple's stock price below $130, diminishing its impact on the Dow, even though its total market value continued to rise.

Since then, Honeywell and Caterpillar have provided the biggest boosts to the Dow as expectations have built for a recovering economy.

Looking over the longer term, profits strengthened sharply for most Dow companies since it first rose above the 20,000 threshold at the start of 2017. At American Express, for example, analysts expect earnings per share to bounce back from the pandemic and tally $6.69 next year, versus $6.07 in recurring earnings in 2016.

At the same time, investors today are more willing to pay higher prices for each $1 of earnings because alternatives are less attractive. The yield on the 10-year Treasury Tuesday was 0.88% compared with 2.5% in January 2017.

SO THIS MEANS MY 401K IS DOING BETTER?

Probably, but not because the Dow is at 30,000. For most 401(k) accounts, what matters much more is how the S&P 500 is performing. That's because many, many more stock funds either directly mimic the S&P 500 or benchmark themselves against that index than the Dow.

Tuesday's rally also pushed the S&P 500 above its record high set on Nov. 16.

WHY PAY ANY ATTENTION TO THE DOW, THEN?

One thing the Dow's final leap to 30,000 indicates is that it's no longer just tech stocks driving the market.

The dominance of Big Tech early in the market's recovery is a big reason the S&P 500 returned to its pre-pandemic record in August compared to November for the Dow. More recently, with hopes rising that a vaccine or two may be arriving soon, the stock market's gains have begun to broaden out.

The Dow is more heavily weighted toward stocks in the financial and industrial industries, which have done better than tech recently after earlier getting walloped by the pandemic.

Many strategists along Wall Street are optimistic that stocks can keep climbing in 2021, mainly because of the prospects for a vaccine. But the market is facing plenty of threats in the near term. Chief among them is the worsening pandemic, which is pushing governments around the world to bring back varying degrees of restrictions on businesses.

Bitter partisanship also means Congress is making little to no progress on delivering more financial support for the economy in the meantime. That sets the stage for a potentially bleak winter for both health and the economy.

So don't be surprised if the Dow crosses back and forth over the 30,000 threshold a few more times.