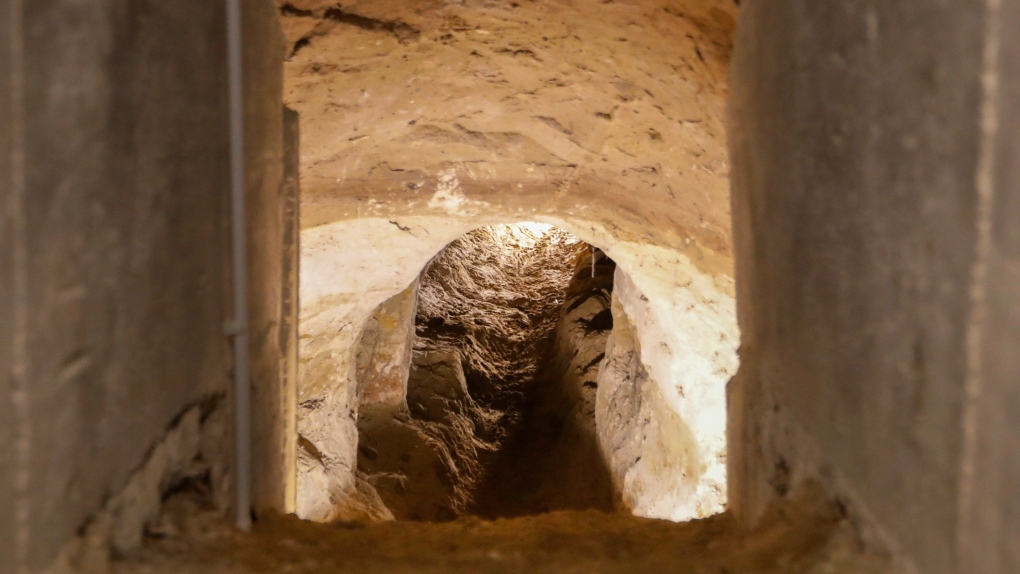 An escape tunnel underneath the Berlin Wall which divided the city for 28 years during the Cold War, is illuminated as he has been visible for public for the first time in Berlin, Germany, Thursday, Nov. 7, 2019. (AP Photo/Markus Schreiber)

BERLIN -- An escape tunnel underneath the Berlin Wall opened to the public on Thursday for the first time amid celebrations of the 30-year anniversary of the opening of communist East Germany's border.

The tunnel at Bernauer Strasse, near the city's main Wall memorial, was opened by Mayor Michael Mueller. He thanked those who started digging the 100-meter (yard) tunnel in late 1970, nine years after East Germany sealed its border.

"It's great to see that the battle for freedom was also taken underground," Mueller said before he took a tour of the new exhibit.

"One can authentically experience ... the courage of the women and men who tried to take people to freedom and resisted the East German regime," he added.

The tunnel was built by a group of people who had escaped earlier to West Berlin. They wanted to help friends and family to flee to the West but, days before it was finished, somebody informed East German officials about it.

East German authorities then found the tunnel by using ultrasound tracking and partially destroyed it.

Built in 1961, the Wall stood at the front line of the Cold War. It cut off East Germans from the supposed ideological contamination of the West and stemmed the tide of people fleeing the country.

In the 28 years that the Wall divided the city , more than 70 tunnels were built underneath the 156.4-kilometre (97.2-mile) barrier and around 300 people managed to escape through them, according to the Berlin Underworlds Association, which conducts tours of the city's historic bunkers and tunnels.

Most tunnels were dug from the West to the East. Bernauer Strasse in the city's Mitte neighbourhood was one of the most popular spots for tunnel diggers because of the high amount of clay in the soil -- seven tunnels were built underneath the wall on a 350-meter (yard) stretch here.

Not all tunnel projects were successful. Some collapsed before they could be used, while others were discovered by East Germany's secret police, the Stasi.

The newly opened tunnel at Bernauer Strasse can be reached through an access tunnel built by the Underworlds Association.

Through two windows, 7.5 metres (24.6 feet) under the ground, visitors can peek into the dimly lit 1970 tunnel but not get inside.

Ulrich Pfeifer, a civil engineer and one of the builders of the tunnel, made calculations and created maps for the project.

Pfeifer fled to West Berlin through the sewerage system just a few weeks after the Wall was erected in August 1961.

"As a Berliner this wall was inconceivable," the 84-year-old said. "It was tearing apart families, it was separating all of us."

He said his motivation to dig escape tunnels was "the conviction of my girlfriend, who got seven years in prison."

"She was 22 years old and was sentenced for nothing other than an escape attempt," he said, still angry with the East German regime 30 years after its collapse.

Trying to flee East Germany was dangerous. Researchers estimate that 140 people died trying to cross the Wall by flying over it, escaping through the sewerage system or jumping from buildings adjacent to the border.

It is not clear how many people died trying to escape specifically through the tunnels.