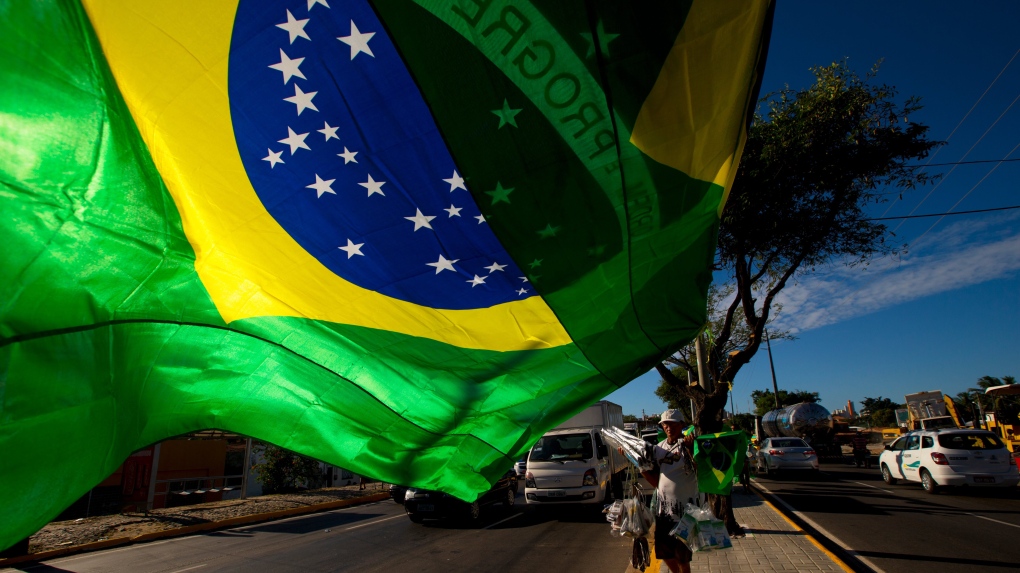 RIO DE JANEIRO -- Dozens of gunmen armed with assault rifles invaded a city in southern Brazil overnight Tuesday and took control of the streets as they assaulted a local bank.

Video broadcast on the Globo television network showed hooded men dressed in black walking the streets of Criciuma in the state of Santa Catarina, and local residents being held hostage during the takeover, which began around midnight and lasted almost two hours. Shots echoed across the city of some 220,000 people.

At least 30 assailants and 10 cars were involved in the well-planned operation, Anselmo Cruz, head of the state police's robbery and kidnapping department, told a news conference, speaking alongside the governor and the mayor. They blocked access to the city -- including with burning vehicles -- to prevent police reinforcements from responding swiftly, and deployed explosives in the robbery.

The gunmen traded fire with officers in the city centre and at a police station, Santa Catarina's military police said on their official Twitter account. Two people were wounded in the firefight: a security guard and a police officer, who was shot in the abdomen and remained hospitalized in serious condition Tuesday.

"It was an unprecedented action for the state. There was never anything with this scope, this violence," Cruz said in a separate interview with Globo News. The television network quoted him as saying the robbers fired bullets with calibres capable of downing a helicopter.

Jose Damasio was driving home from work around 11:30 p.m. when he passed street sweepers and other municipal employees painting crosswalks. Damasio had no way of knowing they would soon be taken hostage.

"If I had been delayed 20 minutes, just a little later, I would've been screwed," the 27-year-old Damasio told The Associated Press by phone. "I got home and 15 minutes later heard the shots."

Through a window of his home, Damasio said he saw the men firing into the air -- with each high-power shot booming like a bomb. He took shelter in a back room with his mother and remained there until the shooting stopped.

Images on Globo showed a bank vault with a square-shaped hole in it and a convoy of criminals' vehicles as they made their escape. Bills were scattered across the ground in one area of the city, and newspaper Folha de S.Paulo reported that police arrested several people who collected 810,000 reais ($150,000) worth of the notes.

Police later located the attackers' vehicles in a cornfield of a neighbouring municipality. Some of the cars' interiors were stained with blood, indicating some of the gunmen had been hit by police bullets, the Santa Catarina police force said on its Twitter account.

State-run Bank of Brazil said in an emailed statement that its branch in Criciuma will remain closed, and that it doesn't provide information regarding the amount of money taken. It didn't respond to an AP request for comment about local media reports the branch was a regional treasury.

The brazen robbery resembled another that took place in July in the city of Botucatu, in Sao Paulo state.There, around 30 armed men blew up a bank branch, took residents hostage and exchanged gunfire with police officers before making their getaway.

The similarity between the two attacks indicated they may have been co-ordinated by one of Brazil's powerful organized crime and drug trafficking rings, said Cassio Thyone, a board member of the non-profit Brazilian Forum on Public Safety. Such incidents have occurred with some frequency over the past decade, he said.

"Crime has moved into the interior; cities that didn't suffer from crime have become vulnerable because of their characteristics," said Thyone, highlighting limited police presence and fewer access points.

Criciuma Mayor Clesio Salvaro took to Twitter overnight while the attack was still unfolding to warn residents of the "robbery of great proportions, by very well-prepared thieves."

"As mayor of Criciuma, I ask that you stay home, don't leave home, exercise all precaution," Salvaro said in a video he posted just before 2 a.m. Tuesday. "Tell your friends and families. Let the police do their job."

Thyone said the attack reflected a failure of intelligence gathering, a lack of integration between security forces and that local police are unprepared to confront threats of this magnitude.