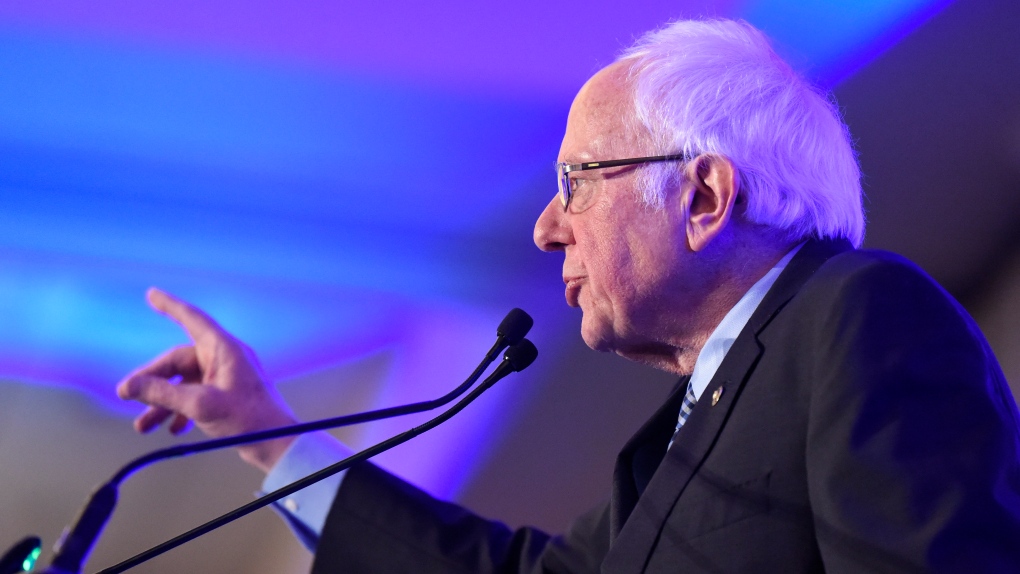 CHARLESTON, S.C. -- Both literally and figuratively, the standard-bearer for America's progressive left now finds himself front and centre.

When hard-charging Vermont Sen. Bernie Sanders, now the undisputed front-runner in the race to challenge Donald Trump for the White House, takes the middle podium in tonight's televised debate in South Carolina, there might as well be a bull's-eye painted on the floor.

So far, in a dynamic that bears striking similarities to Trump's own 2016 ascent, Sanders has largely managed to avoid becoming the target of sustained attacks from his rivals, thanks to a combination of complacency about his chances and fear of alienating his most ardent supporters.

Now, with the delegate bonanza of Super Tuesday just a week away, all that has changed.

"Given the fact that I have been in opposition my entire career ... it is a little bit funny to find myself as the so-called front-runner," Sanders told a CNN town hall event Monday.

"We are going to enter this debate with the full knowledge that tens of millions of Americans want fundamental change in terms of what is going on in this country. They are tired of a president who is a pathological liar, who is running a corrupt administration, who is a racist and a sexist, and a homophobe, and a xenophobe."

It's critical for rivals to slow the Sanders roll: South Carolina is a must-win for former vice-president Joe Biden, while senators Amy Klobuchar and Elizabeth Warren are running low on money and are desperate to build some all-important fundraising momentum going into Saturday's vote.

Meanwhile, billionaire businessman Tom Steyer has been coming on strong in the Palmetto State, where his ad spending has exceeded $22 million, while Pete Buttigieg, the former mayor of South Bend, Ind., has struggled to win the support of black voters, who comprise nearly two-thirds of Democrats in South Carolina.

And then there's Mike Bloomberg, the former New York City mayor who's not on the ballot until Tuesday but will be on the stage tonight, looking to redeem himself after a dismal debate performance in Nevada.

Voters in the southern U.S. are prone to resent a billionaire newbie using his wealth to pry his way into the race at the last minute, Woodard said.

"If you know the South, where during the Depression the average income was about one-third what it was in the Northeast, they don't like pushy rich people. Bloomberg epitomizes the stereotype, and he's not appealing on television and doesn't seem to like to 'press the flesh."'

Bloomberg, who had the target on his back last week in Nevada, is widely expected to focus his fire tonight on Sanders -- as is virtually everyone else.

"I think there is little Klobuchar, Warren and Buttigieg can do to improve their standing given the momentum in play," Woodard said. "I expect the only press story coming out to be something along the lines of, 'Who could be a vice-president in this mix?"'

Sanders, an independent, self-styled "democratic socialist" who conjures fear in the party establishment in much the same way Trump once did among Republicans, also seems to have supporters in Canada: he led a recent online survey by the Angus Reid Institute with the backing of 28 per cent of respondents. Biden registered second at 14 per cent.

Sanders often invokes Canada in his public comments, especially when talking about his signature "Medicare For All" policy plank.

"Somehow they manage to guarantee health care for every man, woman, and child in that country at half the cost that we spend per capita," he said. "Is guaranteeing health care to all people as a human right a radical idea?"

But he's sure to face attacks on multiple fronts, including how he plans to pay for big-ticket promises like Medicare For All, free college tuition and forgiven student debt; reports that he considered a primary challenge against Barack Obama in 2012; and a recent interview in which he praised a Cuban "literacy program" launched by Fidel Castro in the early 1960s.

"There was a lot of folks in Cuba at that point who were illiterate. And he formed a literacy brigade ... he went out and they helped people learn to read and write," Sanders said.

"You know what? I think teaching people to read and write is a good thing."

Sanders will also have to fend off one of the most persistent narratives of his candidacy: that his lack of experience and reputation as a political extremist will make it difficult, if not impossible, to win a general election.

But don't forget, said Charles Bierbauer, a journalism professor at the University of South Carolina: people used to say the same thing about the current president of the United States.

"In one sense, we're so far away from the conventional wisdom elections of the past, where you could lay this thing out and based on trajectory and timeline, say, here's what's going to happen,"' Bierbauer said.

"If you say Bernie Sanders can't win, then how do you account for Donald Trump?"