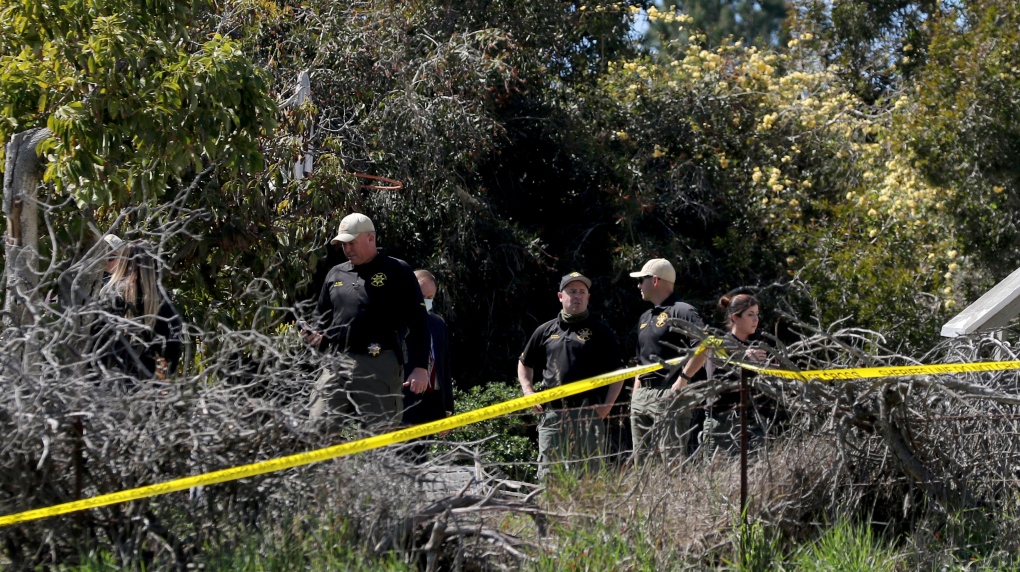 San Luis Obispo Sheriff's Office personnel dig in an area in the backyard of the home of Ruben Flores, Tuesday, March 16, 2021, in Arroyo Grande, Calif. Flores is the father of Paul Flores, who remains the prime suspect in the disappearance of Kristin Smart in 1996. (AP Photo/Daniel Dreifuss)

LOS ANGELES -- Lawyers for a father and son charged in the 1996 disappearance of California college student Kristin Smart criticized the evidence used Monday to make arrests, with one saying it was "so minimal as to shock the conscience."

A prosecutor shot back that lawyers for Paul Flores, 44, who is charged with murder, and his father, Ruben Flores, 80, who is charged as an accessory for allegedly hiding Smart's body, had omitted significant details, though he didn't elaborate.

Attorney Harold Mesick, who represents Ruben Flores, said the evidence found was ambiguous and there was an innocent explanation for what an expert concluded about what police dug up in his client's backyard.

Mesick said the site of what he termed prosecutors' "most damning evidence" was nothing more than disturbed soil that had been dumped in a hole after being removed from the site where a nearby foundation was laid.

"It was a hot mess because it's been previously excavated," Mesick said. "If we even call it evidence, it is so minimal as to shock the conscience."

Paul Flores, a fellow freshman at California Polytechnic State University in San Luis Obispo, was the last person seen with Smart on May 25, 1996. Witnesses said Smart was intoxicated and Flores had said he would walk her home after an off-campus party.

Not guilty pleas were entered on behalf of both the defendants Monday during a virtual arraignment in San Luis Obispo Superior Court.

The two appeared remotely from different rooms in the county jail in the city 160 miles (258 kilometres) northwest of Los Angeles. Paul Flores wore a blue jacket, white shirt and tie and his father was in orange jail scrubs and a blue face mask.

Investigators using ground-penetrating radar and cadaver dogs discovered evidence connected directly to Smart's death last month during a search at Ruben Flores' home a short drive south of campus in Arroyo Grande, authorities said. They haven't revealed what was found but returned to the yard for additional digging after the arrests.

Smart's remains have never been found, but investigators said they believe they know where she was buried, though they haven't disclosed the location.

Defence lawyers criticized the evidence police relied on to get a judge to approve arrest and search warrants, which are under seal.

Aside from Mesick's remarks about the soil, they didn't attack specific evidence police had cited.

Attorney Robert Sanger, the lawyer for Paul Flores, said there was little in the warrants that hasn't been in the public eye for 20 years and he said much of it was speculation.

"There are also conclusionary statements ... by people who admit they have no real evidence and then they opine ... Mr. Flores did it," Sanger said.

Peuvrelle said investigators had found substantial new evidence since a series of searches last year that ultimately led to the arrests. He said the voluminous evidence in the case would take three months to read.

Paul Flores, who has several drunk driving convictions, has a pending weapons charge in Los Angeles, where he was arrested at his home in the San Pedro area. Los Angeles police said they're also investigating two sexual assault complaints against him.

The elder Flores was a former reserve officer for the Redondo Beach Police Department, served four years in the Navy and at age 80 has health problems that would be a "medical nightmare" for the jail, Mesick said. He recently had heart bypass surgery, has diabetes, colitis and takes 17 medications.

"I believe if he remains in custody very much longer, I believe this case will resolve unfortunately by his unnatural death," Mesick said.

Peuvrelle acknowledged that Ruben Flores does not have a criminal record, but he said the charges alleged he had been committing a crime for nearly 25 years by helping his son cover up the killing of Smart.

But Judge Craig Van Rooyen said he would order a bail amount the father could afford because there was a chance he could serve the maximum three years for accessory after murder before ever going to trial. He set a hearing Wednesday to determine that amount.

"We should not be punishing people before the case has been proved against them," Van Rooyen said. "Given the way that murder trials go, I think there's a fair possibility that if he's kept in custody he could serve out the maximum ... before even being able to test the evidence against him."

A previous version of this story incorrectly spelled the last name of attorney Robert Sanger.