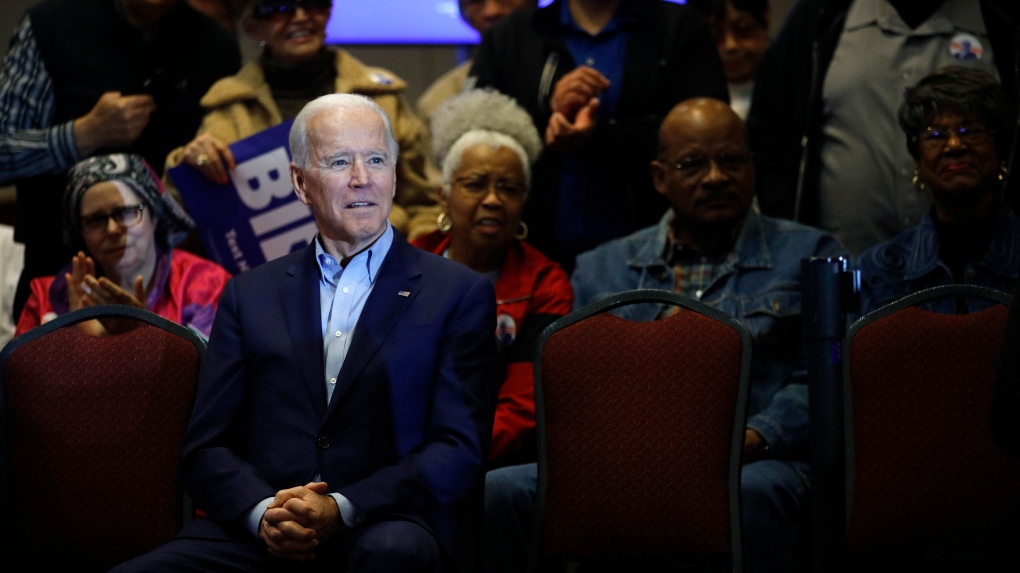 LAS VEGAS -- Joe Biden, standing on a Las Vegas stage roughly 1,000 feet from the scene of the deadliest mass shooting in modern U.S. history, took on White House rival Bernie Sanders for his past vote to exempt gun manufacturers from liability for shootings.

The former vice-president devoted the majority of his Saturday night speech at a Democratic gala on the Las Vegas Strip to deliver a fiery charge against the National Rifle Association and gun manufacturers, vowing to hold gun makers accountable if elected president.

"When I'm the president, we'll take them on, remove the immunity and allow those parents who are trying now to sue for the pain and mayhem they have caused," Biden said on stage at the Tropicana casino-resort. The resort sits adjacent to the grounds where a gunman in 2017 unleashed a torrent of gunfire on a country music festival--an incident that only Biden referred to Saturday night.

Biden, after decrying "carnage in our streets" and the anguish of families whose loved ones were killed in gun violence, said he "will not rest until they're able to sue the gun manufacturers and get a ban on assault weapons."

Biden didn't cite Sanders by name when referring to a 2005 federal law that shields gun makers from liability in most crimes, but said, "some of the people running for office voted for that exemption."

"Ladies and gentlemen that immunity was granted. Granted. And it was a horrible, horrible decision," he said.

Sanders has since changed his position, co-sponsoring legislation to repeal the protections for gun manufacturers. He's also called in his campaign this year for sweeping gun control measures.

Biden's speech came after a frenzied Saturday of campaigning across Las Vegas on the first day of early voting in Nevada's Democratic caucuses. Biden, counting on Nevada's diverse population to keep his campaign alive after disappointing finishes in Iowa and New Hampshire, faces his biggest challenge in the Western state from Sanders. T he progressive icon is seen as the most well-positioned in the state and has reached deep into Latino neighbourhoods.

After holding forth on gun violence, Biden lasered in on health care, a sticking point for Sanders with Nevada's most politically powerful labour group, the casino workers' Culinary Union. Again without naming Sanders, Biden repeated a recent argument from the powerful Culinary Union that a single-payer "Medicare for All" system would eliminate union members' health coverage won through collective bargaining. Biden touted his idea to add a "public option" to existing health insurance markets.

And, he added, "I can actually get my plan passed."

Sanders, who was the first candidate to take the stage Saturday night, laced into billionaire candidate Mike Bloomberg, rattling off a list of heresies against the Democratic Party he accused the former New York mayor of committing. Bloomberg implemented "racist policies like stop and frisk" in New York, opposed the minimum wage and higher taxes on the wealthy during the Obama administration, Sanders said.

"The simple truth is that Mayor Bloomberg, with all his money, will not create the kind of excitement and energy we need to have the voter turnout we must have to defeat Donald Trump," Sanders said.

It was a rare attack by name from Sanders. Bloomberg is skipping the Nevada caucuses and was not at the Clark County Democratic Party dinner where Sanders, Biden and other 2020 contenders spoke.

While the state's formal presidential caucuses are still a week away, Democrats opened the first of four days of early voting across more than 80 locations. State party officials at some sites across Nevada were overwhelmed by long lines.

A spokeswoman for the Nevada Democrats, Molly Forgey, downplayed concerns related to the large early turnout as the political world anxiously watched from afar less than two weeks after Iowa's presidential caucuses turned disastrous. Forgey said Nevada Democratic Party staff and volunteers were working to make every site as efficient as possible.

Early votes cast on paper ballots will be added to in-person caucus votes made on Feb. 22, when Democrats will attend about 2,000 precinct meetings around the state. The Nevada State Democratic Party abandoned its plans to use an app like the one that caused trouble in Iowa and has scrambled to come up with a new system to tabulate results.

Former Sen. Harry Reid, an icon in Nevada's Democratic politics, told reporters that "people should not be counting Joe Biden out of the race yet," but also offered warm words for Sanders' candidacy. When asked he downplayed concerns from some Democrats that Sanders might hurt other candidates should he become the nominee.

Elizabeth Warren, reeling after a weak performance last week in New Hampshire, t ook the stage Saturday night with a raggedy voice, having lost it after a day barnstorming the city. Warren talked about Reid tapping her over a decade ago to oversee the bank bailout after the mortgage crisis, which hit Nevada particularly hard.

Earlier Saturday, Minnesota Sen. Amy Klobuchar began to introduce herself to the state's voters, addressing an African American festival in a Las Vegas park. She praised the state's voting protections and Democratic legislative majority while pitching her appeal to pivotal Midwestern voters.

"In the middle of the country where I'm from I want a little more Nevada there," Klobuchar said. "My plan is to build a great blue wall around those states and make Donald Trump pay for it."

Former South Bend, Indiana Mayor Peter Buttigieg, who is looking to show he can win support from voters of colour after strong finishes in Iowa and New Hampshire pitched his brand of moderation to the Latin Chamber of Commerce in Las Vegas, noting his tax plans would touch top earners "but it's not unreasonable."

"We don't have to go back to the tax levels of the 1960s to deliver on our promises. At least not my promises," Buttigieg said, noting the massive expense of Sanders' health care plans. "I'm not interested in creating a tax just because..."

Campaigning in a state with a large immigrant population, Buttigieg also drew on his own background as the son of an immigrant from the tiny Mediterranean island nation of Malta.

His father, Buttigieg said, was "drawn to America and chose to become an American as an immigrant, but also was always wanting America to be closer to its ideals."

Billionaire philanthropist Tom Steyer, who like Biden is banking on a most diverse pool of voters in Nevada and later South Carolina to lift his campaign, pledged Saturday night to take on President take on corporations, fight for a living wage and "will kick Donald Trump's ass on the debate stage."