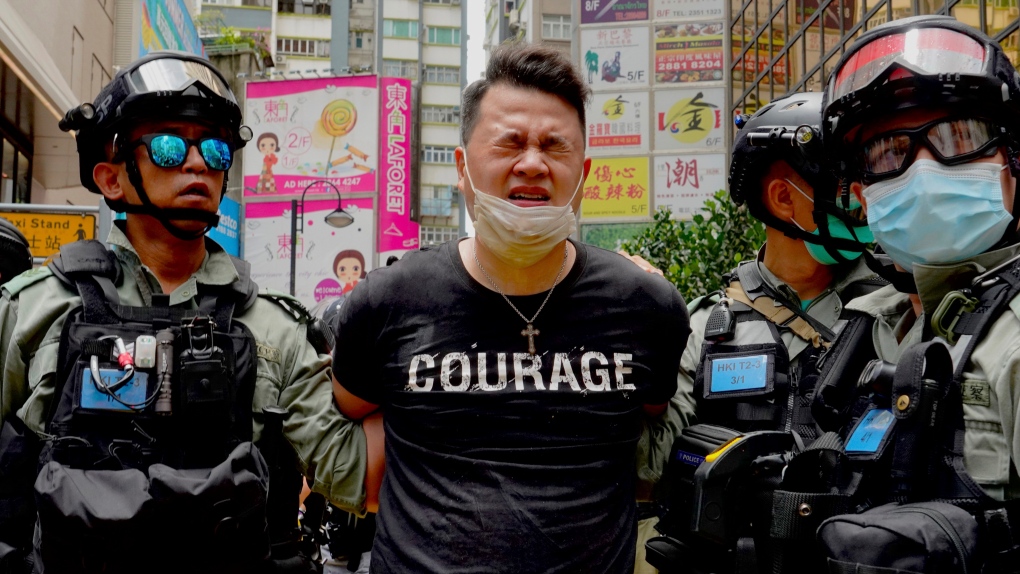 Police detain a protester after being sprayed with pepper spray during a protest in Causeway Bay before the annual handover march in Hong Kong, Wednesday, July 1, 2020. (AP Photo/Vincent Yu)

"When we have made a final decision on those arrangements, then I'll make the announcements," Morrison told reporters. "But if you're asking: are we prepared to step up and provide support? The answer is: yes."

Britain is extending residency rights for up to 3 million Hong Kongers eligible for British National Overseas passports, allowing them to live and work in the U.K. for five years.

Australia could potentially offer Hong Kong residents temporary protection visas that allow refugees to live in the country for up to three years.

The Chinese foreign ministry Zhao Lijian urged Australia to look at the security legislation in a "correct and objective" light.

"Stop interfering in China's internal affairs with Hong Kong as a pretext, and refrain from going further down the wrong path," Zhao told reporters in Beijing.

An offer of safe haven to Hong Kong residents would further strain relations between Australia and its most important trading partner, China.

"They have not positively contributed to Australia's -- or the region's -- security and stability," Australian Defence Minister Linda Reynolds told a security think-tank.

"Australia has watched closely as China has actively sought greater influence in the Indo-Pacific," she said. "Australia is far from alone in being troubled by this."

Morrison on Wednesday announced 270 billion Australian dollars ($190 billion) in additional defence spending over the next decade, which will include long-range missiles and other capabilities to hold enemies further from its shores.