Another Trump on the ballot? Lara Trump eyes Senate seat 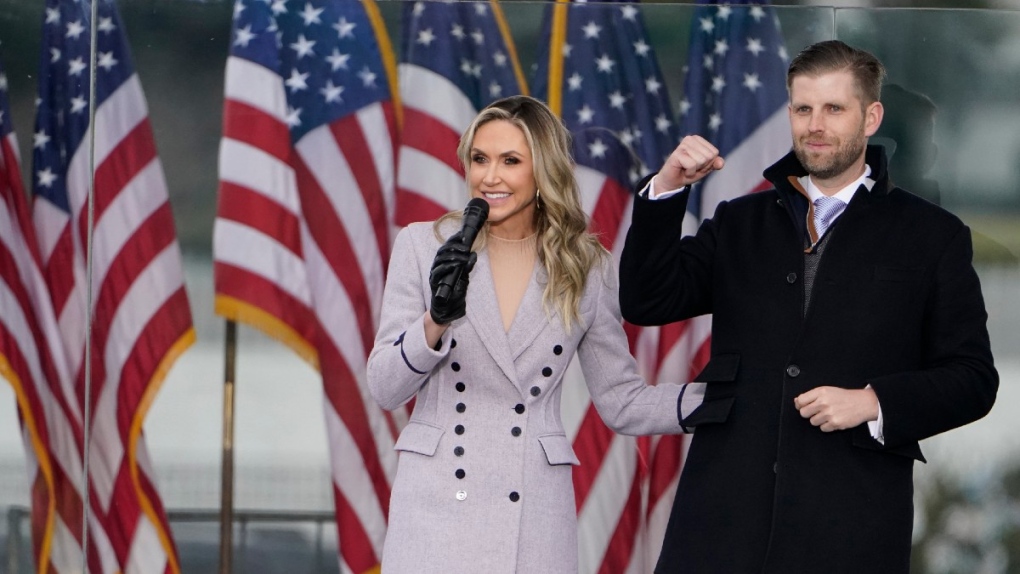 Lara Trump speaks as she stands on stage with her husband Eric Trump at the 'Save America Rally' in Washington, on Jan. 6, 2021. (Jacquelyn Martin / AP)

RALEIGH, N.C. -- A Trump may be on the ballot next year -- but not Donald Trump.

The former president's daughter-in-law, Lara Trump, is eyeing the North Carolina Senate seat being vacated by Republican Richard Burr. While many in the state are skeptical she will move forward, an entrance into the race would set up a crucial test of whether Donald Trump's popularity among Republicans, which remains massive more than a month after leaving office, can translate to others.

The answer to that question has implications that extend far beyond Lara Trump's political future. If Donald Trump can prove that he can help other Republicans win office, his self-appointed status as leader of the party would be validated. Losses, however, would remind Republicans of his vulnerabilities.

For now, Republicans say the only thing that is certain is that Lara Trump would easily dispatch rivals in a GOP primary.

"If Lara were to get in the race, I think she would command widespread and immediate attention across the state," said Michael Whatley, chairman of the North Carolina GOP, who has said his goal going forward is "making sure that we keep all of the Trump voters that came in during the last election and convert them into reliable Republican voters."

Donald Trump fancies himself as a kingmaker in GOP politics, but his record is mixed. Under his leadership, Republicans lost control of the House in 2018. When he was on the ballot again last year, Republicans mounted a strong performance in congressional races, coming much closer than expected to retaking the House.

But the GOP lost two Georgia Senate seats -- and the majority -- in January despite a last minute campaign push from Trump.

The 38-year-old Lara Trump is married to the former president's son, Eric. A former television producer, she has never held public office and declined to comment for this story.

While many in North Carolina privately doubt Lara Trump will ultimately seek the Senate seat, she's being encouraged by South Carolina GOP Sen. Lindsey Graham, a Trump ally who has warned the party against abandoning the former president.

She is still considering a run for the Senate seat, according to two people who have spoken with her recently and requested anonymity to discuss private conversations.

While she would need to move her young family to the state, the Wilmington, North Carolina native, is deeply familiar with the state and its voters after campaigning there extensively in 2016 and 2020, according to one of the people. She was a key surrogate for her father-in-law and named her second child Carolina.

She also likes the idea of being the next Trump to run for something, even as a test to her father-in-law mounting a comeback in 2024, the other said. The former president's daughter, Ivanka, recently said she wouldn't challenge Florida GOP Sen. Marco Rubio and his son, Donald Trump, Jr., is believed to be uninterested in seeking office himself.

For Trump loyalists, there would be a certain satisfaction in a family member succeeding Burr, who was one of just seven Senate Republicans who voted to convict the former president in an impeachment trial for inciting the riot at the U.S. Capitol on Jan. 6.

"Stay tuned," she said last week in an interview on Fox News Channel, adding that she was keeping the option "open."

If she opted for a run, Lara Trump would have to contend with a rapidly changing state. While Donald Trump defeated Joe Biden in North Carolina last year, his margin -- 1.3 percentage points -- shrank in half from 2016. That's driven by a politically active Black population and an influx of voters into areas like Charlotte and the Raleigh suburbs.

Earning their votes will be crucial given doubts that anyone besides the former president will be able to turn out the waves of largely rural, new voters Trump attracted both in 2016 and 2020.

So far, the Senate race has just one declared GOP candidate: Mark Walker, a former congressman and pastor. He represents the bind Republicans in North Carolina find themselves in.

In an interview, Walker was eager to note he met with Trump "many times" in the Oval Office and recounted how the former president encouraged him to run in 2019 when he was mulling a campaign for Sen. Thom Tillis's seat. He insisted Donald Trump remains a powerful force in politics.

"I don't think that's any question at this point, if you pay attention to the political lens, that the Republican political party goes through Donald Trump in terms of his influence on the party as whole," Walker said.

Still, Walker noted the need for Republicans to attract a broader swath of voters beyond Trump's core base.

"We want President Trump's support. We want Mitch McConnell's support. We want Democrats to support us because we have a message that resonates," he said. "I truly believe that there's a space to be able to do both, to be that conservative champion but also be that bridge-builder."

Walker's team tried to secure a meeting with Trump at his Mar-a-Lago club in Palm Beach, Florida, over the weekend while Walker was visiting the state for the Conservative Political Action Conference, where both men spoke. But the two men didn't connect.

Trump's team has been "tapping the brakes a little bit" on rolling out endorsements as they work to develop a framework for choosing candidates, a spokesman said.