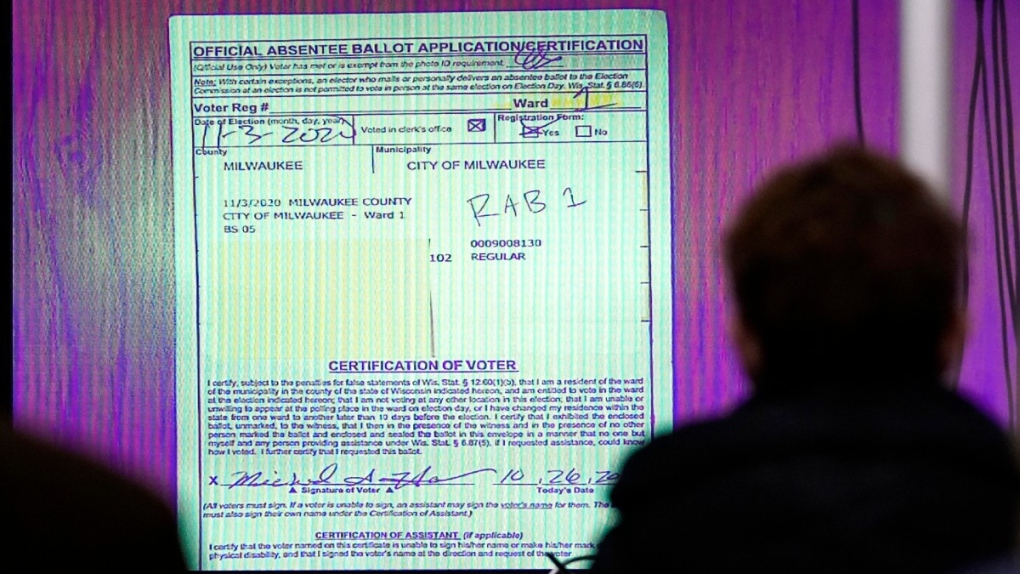 Recount observers look at a screen during a Milwaukee hand recount of Presidential votes at the Wisconsin Center in Milwaukee, Wis., on Nov. 20, 2020. (Nam Y. Huh / AP)

MADISON, WIS. -- Republicans filed a lawsuit Tuesday asking the Wisconsin Supreme Court to block certification of the presidential election results even as a recount over U.S. President-elect Joe Biden's win over President Donald Trump is ongoing.

The lawsuit echoes many of the same arguments Trump is making in trying, unsuccessfully, to have tens of thousands of ballots discounted during the recount. The lawsuit also rehashes a claim that a federal court rejected in September that Facebook CEO Mark Zuckerberg tried to “illegally circumvent Wisconsin absentee voting laws” through grants awarded by a non-profitcentre he funds.

At least 10 cases have been filed across the country seeking to halt certification in parts of all of key battleground states, including lawsuits brought by the Trump campaign in Michigan and Pennsylvania. So far none have been successful.

Wisconsin's election results are scheduled to be certified Dec. 1.

The Wisconsin lawsuit was filed by attorney Erick Kaardal, a former Minnesota Republican Party official who also represented rapper Kanye West in his unsuccessful lawsuit attempting to get on the ballot in Wisconsin. Kaardal represents a conservative group called the Wisconsin Voters Alliance and a host of Republican voters.

Kaardal also filed an unsuccessful federal lawsuit in Wisconsin that attempted to block $6.3 million from being awarded to five heavily Democratic cities from the non-profit Center for Technology and Civic Life, which is primarily funded by Zuckerberg and his wife. A judge tossed the lawsuit that argued the money amounted to bribery to bolster Democratic turnout in Green Bay, Kenosha, Madison, Milwaukee and Racine.

Many of the same arguments alleging the money was illegally awarded and therefore the election results should be nullified are being made in the new lawsuit in state court.

Other claims mirror those by Trump's campaign. Those claims allege absentee ballots should not have been counted where election officials filled in missing information on the certification envelope that contains the ballot and that voters who identified as “indefinitely confined” were lying to avoid the state's photo ID law.

The Wisconsin Elections Commission advises clerks that they can fill in missing information on the ballot envelopes, such as the address of a witness. That has been the practice for years, and it's never been challenged.

The Wisconsin Supreme Court this spring affirmed the state elections commission's guidance that it is up to each individual voter to decide whether they are indefinitely confined. More than 215,000 voters this year said they were confined, which allows them to cast a ballot without having to present a photo ID. The lawsuit says more than 96,000 self-identified confined voters should not count.

Biden won Wisconsin by 20,608 votes, but the lawsuit claims that more than 156,000 ballots should be tossed out.

The lawsuit alleges that more than 14,000 ballots “requested in the name of a registered Republican by someone other than that person” were cast and that more than 12,000 “Republican ballots” were returned but not counted. People do not register to vote by political party in Wisconsin so it is impossible to know how many Republicans or Democrats requested absentee ballots.

The lawsuit seeks to give the power to name presidential electors to the Republican-controlled Legislature. Wisconsin state law allows the political parties to pick electors, which was done in October. Once the election results are certified, which is scheduled to be done Dec. 1, those pre-determined electors will cast their ballots for the winner on Dec. 14.

The lawsuit comes as the recount in Milwaukee and Dane counties has resulted in very few vote changes. As of Tuesday morning, Trump had gained just 57 votes. Trump paid for a recount in only the two counties with the largest numbers of Democratic votes.

Nearly 400 absentee ballots cast in Milwaukee that were not opened on Election Day were discovered Tuesday, a mistake that the city's top elections official attributed to human error. The county board of canvassers voted unanimously to count the ballots as part of the recount.

“If there's one positive to come out of the recount it's that indeed that every vote is being counted, including these 386,” Milwaukee elections chief Claire Woodall-Vogg said.

The recounts in both counties were on track to be done on time.