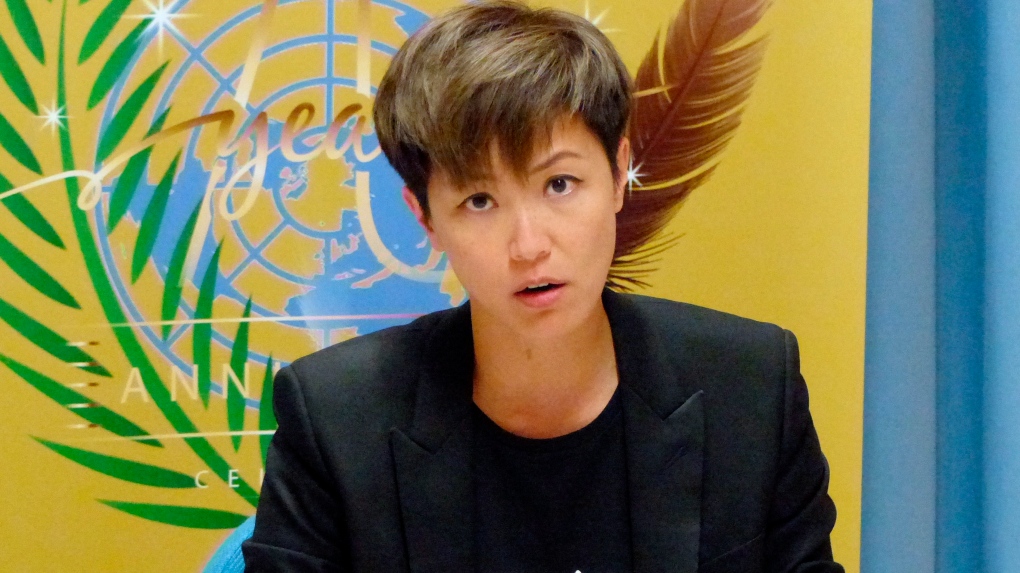 GENEVA -- Just like her fellow Hong Kong protesters, pop star Denise Ho is standing up to China. Just like them, she seems to have gotten under Beijing's skin -- this time at an international human rights venue.

The Cantopop singer used her star power to stand up to China's economic and political power at the UN's top human rights body Monday, telling the Human Rights Council that human rights were under attack in Hong Kong and asking it to suspend China as a member of the 47-nation body for its abuses.

Ever sensitive to its growing international reputation, China shot back and interrupted Ho twice during her allotted 90-second slot. The chair, Iceland's ambassador in Geneva Harald Aspelund, gave some gentle reminders, but let her keep talking.

Ho's comments were some of the sharpest and most varied criticism of China that the council has heard since the United States pulled out last year, partly over Trump administration complaints that too many rights-violating states were among its members. The U.S. had been generally seen as one of the countries least hesitant to stand up to its rising rival at the Geneva-based council.

Ho ripped into the bill that would allow Hong Kong residents to be extradited to mainland China for trial, saying such a move would "remove the firewall protecting Hong Kong from interference of the Chinese government" -- an allusion to a British-China agreement linked to Hong Kong's handover to China in 1997.

Chinese diplomat Dai Demao quickly upbraided her, saying she had wrongly referred to Hong Kong "side-by-side" with China. He said that was an affront to the widely recognized "One China" policy.

Ho then denounced the disqualifications of lawmakers, the jailing of activists, and the "cross-border kidnappings" of booksellers in Hong Kong as signs of "China's tightening grip." She said Hong Kong autonomy had slowly eroded since the handover. She accused China of "preventing our democracy at all costs" such as by appointing as Hong Kong CEO Carrie Lam, who the protesters want to see ousted.

Dai burst in again to reject "unfounded allegations" and appealed to the chair that she refrain from using "abusive language."

Unbowed, Ho raised the tone again, asking the council whether it would suspend China and convene an urgent session to protect people in Hong Kong amid rising protests.

UN Watch, the advocacy group that hosted Ho, faulted Western countries for not speaking out in her defence. China's envoy also blasted the non-governmental organization, saying it had "abused its consultative status" and engaged in slandering -- without mentioning the group or Ho by name.

Speaking to reporters afterward, Ho said she hadn't received any threats for her outspokenness.

In an interview with The Associated Press before the session, Ho said the implications of China's alleged rights abuses went far beyond Hong Kong, in places like Tibet and China's Xinjiang region, home to many Uighur Muslims.

"This is a very serious issue and a global issue, that not only touches Hong Kong people, but really the global world -- where you see governments they are silencing themselves, because of being afraid of political reprisal, economic reprisal," she said.

Ho praised a "creative move" by protesters in Kowloon over the weekend who reached out to incoming tourists from mainland China, saying many people in China had been "brainwashed to think that Hong Kong people are just rioters and anti-China, which is not true."

Ho said her activism has come at a price: She hasn't had any commercial work for the last several years, and she can't travel to China. But she brushed off the personal impact, and said she'll stay committed to the cause -- even though she can't predict how things will evolve.

"The police they are still using excessive force," she said. "As long as the Hong Kong government keeps on ignoring everything that's happening and just pretending that it's OK, these protests will go on -- I'm quite sure of that."