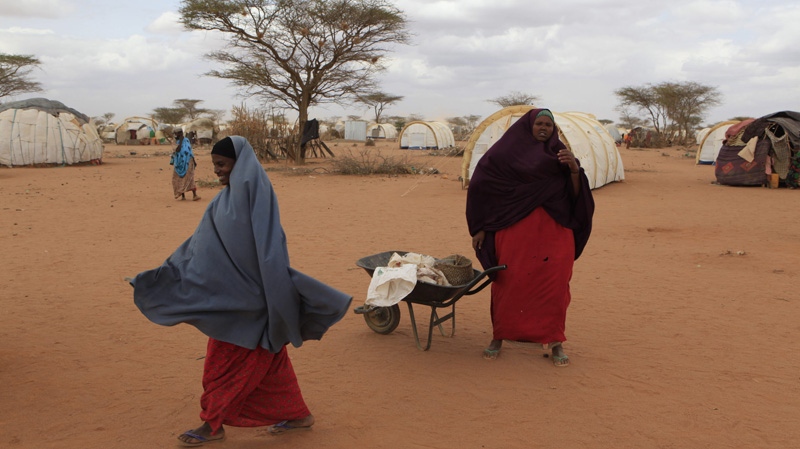 The appeal by the head of the United Nations refugee agency to fight what he calls the "worst humanitarian disaster" in the world in Somalia is a result of international communities deserting the eastern African country, the president of the Canadian Somali Congress says.

"The world has really abandoned the people of Somalia and we hope that this latest call by the UN humanitarian co-ordinator will awaken the consciousness of people around the world," Ahmed Hussen told CTV News Channel on Sunday

Hussen said the situation on the ground is an "absolute disaster."

"There are women who are abandoning their babies who are dying on the way as they try to make it to refugee camps," he said.

On Sunday, Antonio Guterres, the head of the UN Refugee Agency, was in Dadaab to visit a Kenyan camp overflowing with tens of thousands of newly arrived refugees forced to leave their homeland because of the drought in the region where Somalia, Ethiopia and Kenya meet.

The World Food Program estimates that 10 million people in the region need humanitarian aid, and the UN Children's Fund estimates that more than two million children suffer from malnourishment.

During Guterres' visit, he spoke with a mother who had lost three children during her 35-day hike to reach the camp.

"I became a bit insane after I lost them," Muslisma Aden, the mother, told Guterres. "I lost them in different times on my way."

Guterres said Dadaab, which currently shelters more than 380,000 refugees, holds "the poorest of the poor and the most vulnerable of the vulnerable."

On Thursday, Guterres was in Ethiopia to visit another refugee camp that is also overflowing.

He told accompanying journalists that "2011 has been the year of all crises, but I think that in Somalia we can find the worst humanitarian disaster of this year."

Guterres appealed for more than $130 million in international aid.

In Dollo Adom alone, an average of 1,700 refugees arrive each day. Among these recent arrivals, mortality rates are high. And at least 50 per cent of children are either moderately to severely malnourished.

In Kenya, the rates are similar.

And it's in these waiting areas where most people die, Dr. Dejene Kebede, a health officer for the UNHCR, told The Associate Press.

He said there were 58 deaths in camps in one week alone in June.

The dire situation is made worst because the camps don't have the capacity to feed the refugees, the head of Doctors Without Border at the Dollo Ado camps told The Associated Press.

"We can treat the severely malnourished children, but they will definitely come back to us underfed because there is not enough food and almost all of them suffer from diarrhea," Jerome Souquet said.

Compounding the difficulties in Somalia has been the country's continuing battle with al-Shabaab insurgents who are fighting to overthrow the UN-backed government.

Since the civil war in 1991, there has been no central government over most of Somalia's territory.

Al-Shabab, which literally means "the lads," is an al Qaeda-linked group.

The group had forced out all international aid groups, but has since announced it would lift the ban on relief organizations.