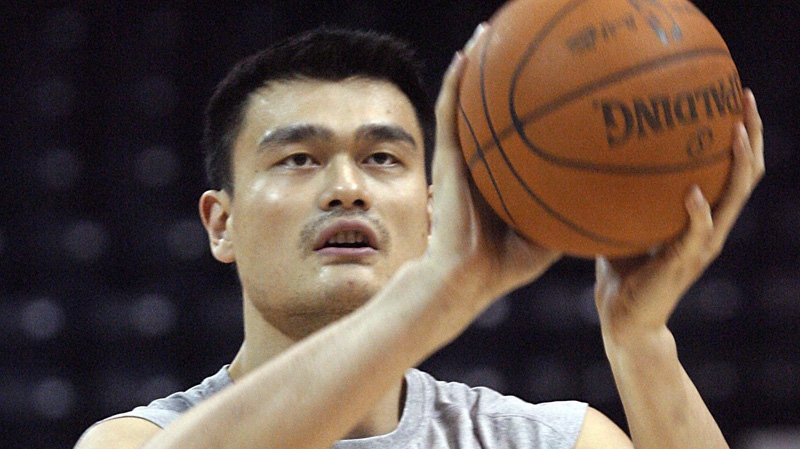 In this Oct. 2010 file photo, the Houston Rockets' Yao Ming warms up for a preseason game in Hidalgo, Texas (AP Photo/Delcia Lopez)

BEIJING - Chinese basketball fans reacted with disbelief and sadness on Saturday over reports of Yao Ming's sudden retirement from basketball.

Although the seven-foot-six Houston Rockets player has not formally announced his retirement, the NBA's official website reported the news on Friday.

Thousands of fans flooded online forums on Saturday reacting to the news. One wrote: "He's China's top athlete...it's a pity to lose such a sports icon."

Other fans like Liu Kan, 28, a security guard in central Beijing, said Chinese fans should thank Yao Ming for bringing a sense of pride to Chinese sports.

"His retirement will be a huge loss for China since he's one of our biggest stars," said Liu. "The news still hasn't sunk in, so I'm in denial until he officially announces his retirement."

China's most popular online portals, sina.com and sohu.com, headlined the news of Yao's possible retirement prominently on their homepages.

"Declaring the end of a Yao era," said the headline of a sohu.com story.

Over the past nine seasons with Houston, Yao has taken on the status of a national icon in China. He almost single-handedly expanded the NBA's reach throughout Asia, spiking merchandise sales and TV ratings for games after the Rockets made him the top overall pick in the 2002 draft.

Yao, who turns 31 in September, has been plagued by leg and foot injuries in the latter part of his career. He missed 250 regular-season games over the past six seasons.

Despite the shock, some Chinese fans felt it was time for the country next generation of sports stars to emerge.

"It's not healthy to put so much hope on one player and China is capable of producing more talent in the coming years," said Wang, who works at an insurance company in Beijing. "As a fan, I'm sad to hear he is leaving, but this is probably for the best."

China's official Xinhua News Agency reported Yao is expected to hold a news conference on July 20 to announce his plans.