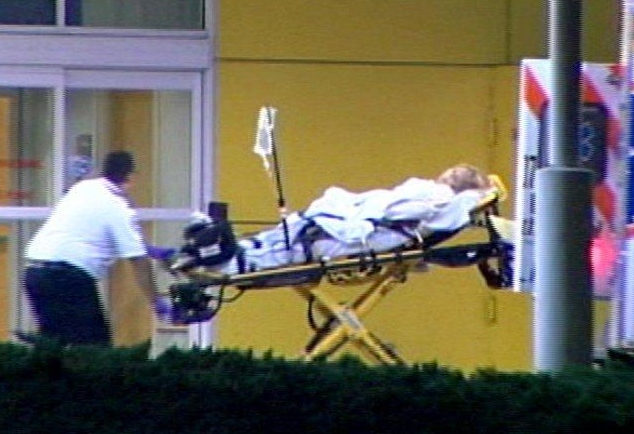 In this image from NBC affiliate WESH, EMS arrive at Health Central Hospital with a woman who was transported from Tiger Woods' home in Florida, early Tuesday, Dec. 8, 2009.

Tiger Woods' mother-in-law has been released from hospital after being rushed by ambulance from the Woods' Florida home early Tuesday morning.

Orange County Fire officials say a 911 call came in from Woods' mansion at 2:36 a.m. and Barbro Holmberg, the mother of Woods' wife, Elin Nordegren. was transported to Health Central Hospital in Ocoee.

Holmberg was released 11 hours later, hospital spokesman Dan Yates told The Associated Press. He said she was admitted for stomach pains but could not provide further details due to privacy laws. The condition was described as not serious.

A spokesperson for Holmberg, Eva Malmborg, said as far as she knows, Holmberg doesn't suffer from any chronic condition. She is expected to be back at her job as Gavleborg county governor in central-east Sweden next week.

Holmberg had a private room and the family hired extra security to keep away the media, Yates said.

Some celebrity news outlets report Nordegren was seen following the ambulance to hospital, driving in a black Cadillac Escalade and then leaving hospital a few hours later.

The hospital was the same one that treated Woods after his strange late-night car crash last month.

Holmberg recently arrived in the U.S. from Sweden to be with her daughter, who has reportedly been under pressure since Woods was involved in a mysterious crash on Nov. 27.

In that incident, Woods' SUV rammed into a fire hydrant and a tree. Although there were rumours that a domestic incident sparked the crash, Woods refused to speak to police.

Police did charge the golfer with careless driving, and handed him a US$164 fine and four demerit points on his driving record.

Two days later, Woods released a statement on his website in which he admitted to letting his family down with what he called "transgressions." But, he did not confirm allegations he had been involved in extramarital affairs.

That statement was released hours after the gossip magazine Us Weekly posted a voicemail message on its website in which Woods is heard pleading with a woman to remove her name from the greeting on her voicemail, and warns that his wife may call her. Us claimed the voicemail was left on the phone of Los Angeles cocktail waitress Jaimee Grubbs.

Several celebrity news outlets are reporting that Nordegren recently moved out of the couple's home and moved into another nearby home the couple also owns.

Outside the Woods' gated community Tuesday morning, luxury SUVs and cars drove in and out as a few reporters and television news trucks took watch outside.

Woods, the world's top-ranked golfer, has not appeared publicly since Nov 27.