Why are Canadians moving away from small cars? 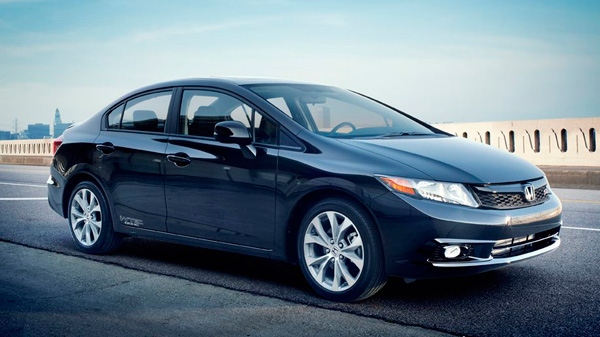 We may seem like the small-car nation we've almost always been, but don't be fooled. While eight of the top 10 best-selling passengers cars are fuel-sipping grocery getters -- compacts or subcompacts -- four of those eight are actually in a sales slump this year.

What gives? Fuel prices remain high, in the $1.20-range a litre for regular across Canada. That's more than twice what gas was a decade ago, according to DesRosiers Automotive Consultants. So if fuel is pricey and the economy is a little rocky -- as economists keep telling us -- why are so many affordable small car models struggling to find a happy home?

First, let's have a look at what's going on here. A DesRosiers Automotive sales chart of Canada's Top 10 Best Sellers through the end of July shows the extent of the problem.

On the other hand, it seems that if you build a little winner of a car, it really scores. The all-new Hyundai Elantra (No. 2) is up 40.7 per cent on the year and threatening to unseat the Civic as Canada's best-selling car.

The Volkswagen Jetta (No. 6), with sales up 145.7 per cent, is a stunning success. VW Canada cut the price and stripped out content, making the car bigger along the way, and now the Jetta is the darling of many small-car Canadian shoppers.

The Ford Focus (No. 7) is an interesting story, too. Ford added content, dramatically improved ride, handling, styling and everything else in an effort to get buyers to pay more to go small. Voila! They have. Focus sales are up 6.1 per cent this year and Ford is commanding healthy transactions prices.

Not to be forgotten in this mix is the Chevrolet Cruze. The replacement for the old and lamentable Chevy Cobalt is a vast, vast improvement over its predecessor. While year-over-year comparisons are impossible because there was no Cruze for sale in 2010, it's fair to say General Motors is thrilled with the Cruze.

Here, in fact, are the details of Canada's Top 10 Best-Selling cars through the end of July:

One number on that list surely jumps out: 24.3. That's the percentage increase in sales of the revamped Hyundai Sonata, a midsize sedan. It's a hit thanks to a) a fuel efficient four-cylinder engine b) aggressive styling c) good quality d) excellent pricing. The only other midsize in the Top 10 is the Fusion, which is priced exceptionally well and finding a home with many fleet buyers.

What is tougher to explain, says Dennis DesRosiers, president of DesRosiers Automotive, is the slump being suffered by so many small cars.

"I've sent this chart out many times over the last decade and the story was always the same," says DesRosiers in a note to clients. "Gas prices go up and market share of entry level vehicles goes up with them.

"And the reverse was true as well: gas prices go down and so does the market share of entry level vehicles. A decade of this trend led me to believe that these two variables were highly interconnected and that gas prices could be a powerful tool to move consumers to more fuel-efficient vehicles."

Apparently not so much any longer.

"In a very interesting twist of economic factors," he continues, "gas prices have skyrocketed and market share of entry level vehicles has actually gone down or at the very least have stabilized."

Why? DesRosiers suggests one or all of three factors at play.

First, the economic downturn that started with the economic meltdown of 2008 has hit the least wealthy hardest. They're primarily buyers of small, affordable cars and DesRosiers suspects they have simply not been in the market for a new car.

"We know that the market is operating at least 200,000 units below its potential and it would follow that many of these lost consumers would be in the core entry level segments when they return to the market," he notes. "This is the good news part of this story since they will eventually return and this would push up the market share of these products at that time."

Second, to generate cash coming out of bankruptcy, GM and Chrysler "have been in an all-out war to find profits and Ford has had no choice but to follow." Thus, the pickup truck incentive war that has been going on for the better part of a year or more.

"In the meantime, these incentives have artificially pushed up the market share of pickup trucks to all time record levels in Canada," DesRosiers note. "There have been months where pickup trucks have accounted for as much as 18 per cent of total sales where as longer term they usually account for about 13-14 per cent of sales."

Finally, DesRosiers suggests that the share of small cars in Canada is now stable. That is, the percentage of buyers who are going to buy something little and affordable has found its natural level at 45-50 per cent of the market.

"There is a large swath of the market that CAN'T move to a smaller platform because of the fundamental need for a larger vehicle," he notes. "If we are pushing the upper limits of this market position then even higher gas prices will not move the market to smaller vehicles."

Even with high gas prices, better products, more products in these segment and more, there could very well be little room to grow the small car side of the Canadian marketplace. One key part of the story, then, is that the best small cars will very likely take sales away from lesser models.

We're not just small car nation here in Canada -- we're a picky small car nation. And that means the best products, the newest ones selling at the most attractive prices, win.

And for the record, here is the list of Canada's Top 10 light trucks through the end of July: