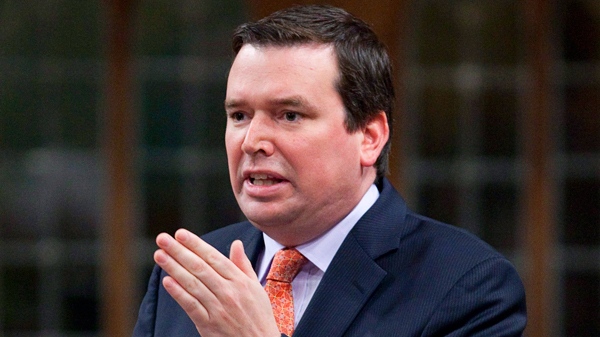 Minister of Natural Resources Christian Paradis responds to a question during question period in the House of Commons on Parliament Hill Ottawa on Friday May 28, 2010. (Sean Kilpatrick / THE CANADIAN PRESS)

OTTAWA - Parliament's ethics watchdog will examine a cabinet minister's dealings with Rahim Jaffer, despite the Conservative government's herculean efforts to distance itself from the former Tory MP.

Mary Dawson, the ethics commissioner, will look into whether Christian Paradis improperly used his position as public works minister to help out Jaffer.

Jaffer called Paradis on the minister's cellphone last August, asking him to go for beers and telling him about a project he was working on through his company, Green Power Generation, to install solar panels on federal buildings.

Paradis arranged for his parliamentary affairs director, Sebastien Togneri, to deal with Jaffer and set up meetings with bureaucrats.

Documents tabled with a House of Commons committee show that civil servants were asked to speed the process of meeting with Jaffer and business partner Patrick Glemaud.

"The sector has had this for weeks. What's the hold up?" Togneri asked the deputy minister's office when a meeting had not been set up a month later.

Another of the minister's staff described the department's reservations as a "problem" in an email to Jaffer, saying bureaucrats were "being (typically) hard-headed" about setting up a meeting."

A flurry of correspondence went through the department, until five bureaucrats and one political staffer from Paradis' office finally met with Glemaud in October 2009. The project never received money from the department.

Jaffer and Glemaud are facing an investigation by the lobbying commissioner over related allegations they were approaching officials without first registering their activities. They have both vigorously denied they were engaged in any improper lobbying.

Paradis maintains there was nothing wrong with the way he handled his contact with Jaffer.

"I have always conducted myself appropriately and in accordance with my obligations," Paradis, now natural resources minister, said in a statement Tuesday.

Paradis also pointed to comments made to the government operations committee by a Public Works bureaucrat. Andre Morin said Jaffer and Glemaud followed the proper procedure for approaching the department, as required by the department's guide to doing business with the government of Canada.

The guide advises that businesses "contact the people in the organizations, directorates and divisions within departments that need your goods and services." It goes on to say suppliers should look for the right materiel managers in each department.

Morin himself had written in an internal email that the deputy minister was concerned that type of request for a meeting could "contravene and disrupt our daily operational or program requirements, task and work."

Prime Minister Stephen Harper emphasized that Jaffer did not receive any business from the government.

"So I welcome the ethics commissioner's look into this," Harper said in Waterloo, Ont., on Tuesday.

"A review of the facts will indicate quite clearly that Minister Paradis acted correctly at all times."

Liberal MP Marlene Jennings, who filed the original complaint with Dawson's office, said she did not accept Paradis' position.

"Do you think that there's a directory where someone will find (the minister's) cellphone number? I think not," Liberal MP Jennings said Tuesday.

"I think the only way that ordinary citizens could get a hold of it is for him to actually give it out publicly -- and he declined to do that."

Dawson will base her examination on sections of the Conflict of Interest Act that bar public office-holders from giving preferential treatment to a person based on who they are, or furthering the interests of a friend or relative.

Jaffer has described Paradis as a friend, and told the same committee that because of his previous role as Conservative caucus chair he knew the minister's family "quite well."

A spokesman for Democracy Watch, an accountability watchdog independent of government, said Dawson should have undertaken a review of all the ministers and staff that had contact with Jaffer.

"So while Ethics Commissioner Dawson's investigation into Minister Paradis' actions is welcome news, she continues to neglect her enforcement duties by ignoring clear evidence of highly questionable actions by many other government representatives," Duff Conacher said in release.