What are great white sharks doing off Canada's East Coast?

CAPE BRETON ISLAND, NOVA SCOTIA -- What’s it like touching a live, great white shark? Not as you might think.

Although its skin looks perfectly smooth and sleek, it feels slightly rough. That’s to help reduce drag when they swim. And it’s just one thing we learned when one of those apex predators was lifted out of the ocean, onto a ship and right to our feet.

OCEARCH is a non-profit group that tags and tracks great whites in an attempt to learn about where the mysterious creatures breed and give birth. The group gives scientists and researchers a rare opportunity to study great white sharks hands on, lifting the apex predators out of the ocean. And they use a technique like no one else on the planet.

OCEARCH founder Chris Fischer repurposed an old Alaskan crab fishing ship just for this purpose. The ship’s hydraulic arm that used to lift a massive crab trap is now fitted with a platform that can be lowered into the ocean.

But the massive sharks that are guided onto that platform can be heavy enough to tip the ship over, so ballasts in the hull are filled with water as counterbalance. Believe it or not, all of that is the easy part.

Bridging an adult great white shark that’s more than four meters long and weighs more than two cows to the ship’s lift is quite another matter.

Brett McBride is one of the quietest, calmest people you could ever meet, and he likely has the craziest job of anyone you’ve ever known.

Brett is a shark wrangler. A job he created, and a technique he’s honed over a decade.

A fisher by trade, he started hooking sharks the same way he’d hook any other fish. Leaving the big ship, he’d jump onto a small boat with a thick rope line, a large hook and some bait.

It seemed simple enough. But great white sharks are much bigger and stronger than anything else he’d ever fished. And once a white shark got a hook in its mouth, it would immediately dive to get free. No human can fight that.

So Brett came up with an idea. He started using large round buoys, attaching them at intervals along the thick fishing rope, closer and closer to the hooked shark’s mouth as it was being reeled in. That was a revelation.

With enough buoys floating near its head, the massive shark was unable to dive. Brett could then “walk” it back to the ship and lead it onto the submerged platform.

Brett’s final step? Jump onto the submerged platform with the great white, to ensure it got on smoothly. There’s a chance the shark can get caught on the edge of the lift, or try to turn around. So Brett holds the line that ends with a great white shark, guiding it onto the ship’s lift. 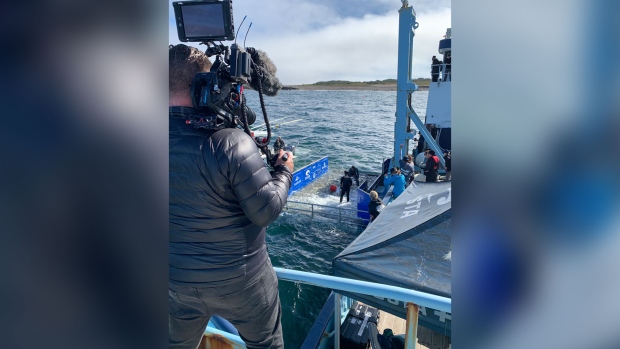 When the platform is raised out of the water with the shark, Brett’s job is to keep it calm. A black towel over its eyes and a tube feeding water into its mouth to help it breathe is usually all it takes.

Brett’s efforts give scientists and researchers fifteen minutes with the shark to gather data, blood and tissue samples. Those will go to more than a dozen shark studies around the world. All in the hope that some day those big questions about great white shark breeding and birthing will be answered.