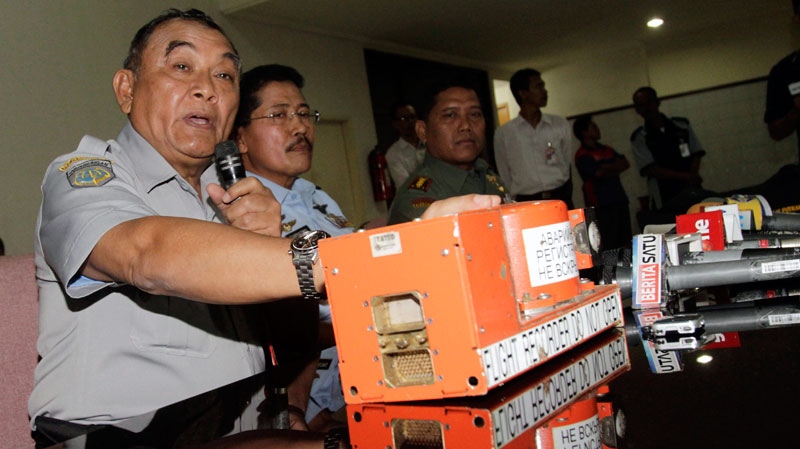 JAKARTA, Indonesia - Villagers have found the flight data recorder from a Russian passenger jet that slammed into an Indonesian volcano three weeks ago and killed 45 people, officials said Thursday. The device could help explain what caused the crash.

Another part of the Sukhoi Superjet 100's "black box," the cockpit voice recorder, was found about a week after the May 9 accident during a demonstration flight for potential buyers.

However, the flight data recorder - which logged data such as the jet's altitude, speed and route - was buried in a landslide after the plane smashed into the side of Mount Salak, said Daryatmo, chief of Indonesia's search and rescue agency.

He said the recorder was in good condition when a group of nine villagers found it Wednesday in a deep ravine.

They found the device after rains washed away some of the earth, said the search mission chief, Col. A.M. Putranto.

Digging with farm tools, dozens of villagers who assisted in the search also found remains of victims and other parts of the plane, including its tail, a control lever and a compressor, Putranto said.

Indonesian and Russian investigators are analyzing both recorders in a laboratory in Jakarta to try to determine the cause of the crash, said Tatang Kurniadi, who heads Indonesia's transportation safety commission. It might take up to a year to finish the investigation, he said.

Kurniadi said investigators have finalized transcription from the cockpit voice recorder, which was found about a week ago. Those recordings are now being analyzed with assistance from interpreter.

The Superjet is intended to help resurrect Russia's aerospace industry.

The plane was being demonstrated for representatives of Indonesia's fast-expanding domestic airlines, which are among its biggest potential buyers.