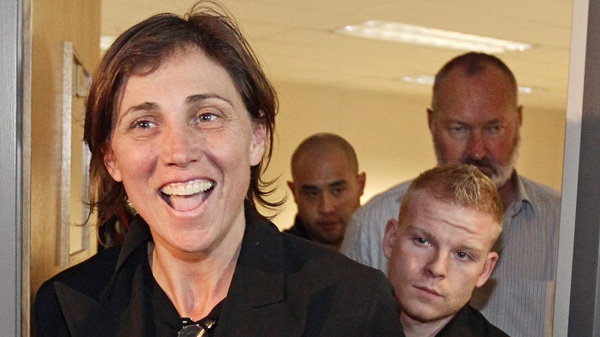 Evi Quaid, left, and her husband, actor Randy Quaid, far right, are escorted from an Immigration and Refugee Board hearing in Vancouver, B.C., on Friday October 22, 2010. (THE CANADIAN PRESS/Darryl Dyck)

VANCOUVER - An upscale Vancouver neighbourhood is still buzzing after the arrest of actor Randy Quaid and his wife Evi, who are wanted in the United States on outstanding warrants.

Debbie Pfeifer, who works in a lingerie store in the Kerrisdale area, said she peered out the window Thursday afternoon when she noticed a police car blocking the road next to a bank.

People who've heard about the Quaids' arrest have been wandering into the store to ask her and a colleague for details of what went down, she said.

Pfeifer said several plainclothes officers started milling about at around 3 p.m. as a tall, bearded Quaid spoke to a man she believes was his lawyer and Evi Quaid "popped in and out of a police car."

Pfeifer and her co-worker didn't know the drama unfolding before them and several shopkeepers for two hours involved a Hollywood actor and his "smartly dressed" wife, who wore a black puffy jacket.

"A customer came into the store and she says, 'That was Randy Quaid out there."'

Pfeifer said she hadn't seen Quaid, a former Oscar nominee, in a movie for a long time and didn't recognize him.

"Apparently the rumour was he was in the (bank) making inquiries about getting a mortgage or something and of course they put the information in the computer and it pulls up that there's a warrant out for him from the States."

Officials with the Canada Border Services Agency and police spoke with the Quaids before their black car with California licence plates, possibly a BMW, was towed, Pfeifer said.

The couple's dog was also taken away, likely by the SPCA, she said.

"It was quite amusing for all of us in the shops," Pfeifer said, giggling.

"We would wander out, have a look. And if we were smart we would have walked across the street with a stupid cell phone and taken a picture or at least gone to see what it was about but we just didn't. But as Canadians we just don't do that."

Charlotte Kennedy, a barista at a Kerrisdale coffee shop, said she wondered what was going on when she saw Quaid, who is known for his role in the National Lampoon's Vacation movies.

"I saw him sitting on a bench with these big green army-print bags," Kennedy said." And his wife was crying on his shoulder."

Quaid and his wife are wanted in the United States for allegedly breaking into a home they once owned and then failed to show up for a court hearing on felony vandalism charges.

They are now seeking refugee status in Canada.

A concierge at the Sutton Place Hotel in downtown Vancouver said Saturday the Quaids had been staying there but she believed they had checked out.

Toronto immigration lawyer Lorne Waldman said the couple may end up living in Canada for at least six months, even if officials expedite a hearing after determining whether the couple is eligible to make refugee claims.

Waldman said some refugee claims were fast tracked in the past if they were considered frivolous but that process ended a decade ago because it wasn't considered cost effective.

New regulations starting next June would have guaranteed the Quaids a hearing within 90 days.

On Friday, the couple appeared at an immigration hearing as part of their claim for refugee status.

The hearing became a bizarre affair as the couple spoke about a secret plot to kill Hollywood celebrities.

Evi Quaid said actors such as David Carradine and Heath Ledger were mysteriously "murdered" and that she and her husband fear they could be next.

"We feel our lives are in danger," she said.

Carradine, best known for his 1970's television series "Kung Fu," hanged himself in Thailand last year at age 72. Ledger died in 2008 from an accidental overdose.

At one point in the hearing, the Quaids' lawyer, Brian Tsuji, held up a hand-written statement from their clients, saying, "Yes, we are seeking asylum from Hollywood star-whackers."

The couple asked for an adjournment to better prepare their case and were ordered released from custody.

They must each post a $10,000 bond on a promise to attend their next hearing on Thursday.