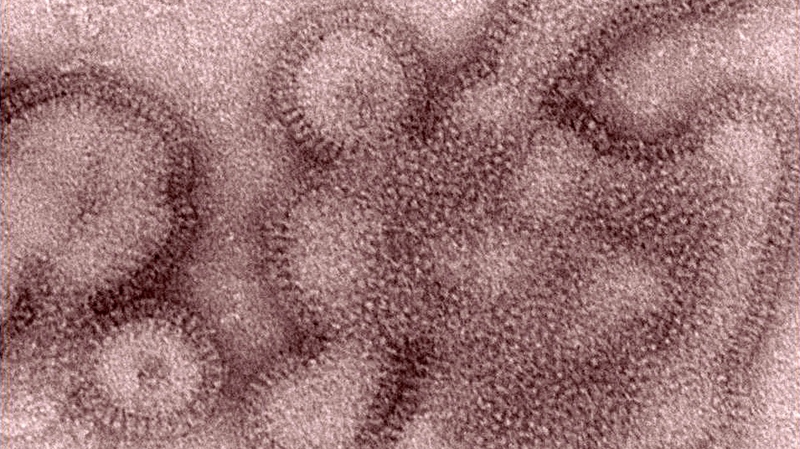 This scanning electron micrograph view depicts some of the ultrastructural details displayed by swine-origin H3N2 influenza viruses responsible for causing illness in Indiana, Maine, Iowa, Pennsylvania and West Virginia in 2011.

The Wisconsin case seems to be a one-off infection, with no signs of further spread. But the investigation into West Virginia case suggests the child was infected by another person, not a pig and that some amount of human-to-human spread of the virus took place in the unnamed community where the child lives, according to details released Friday by the U.S. Centers for Disease Control.

The H3N2 case is the 12th -- in five states -- reported in the U.S. since this new virus was first spotted in July. And the CDC acknowledges there are probably more cases that haven't been picked up by the country's flu surveillance systems.

"We don't think these are all" the cases, said Dr. Joe Bresee, head of the influenza epidemiology team in the CDC's Influenza division.

To date no other country has reported seeing human infections with this virus, which has also been isolated from pigs in the U.S.

Details of the investigations into the West Virginia case -- the second in that state -- and one spotted in the fall in Indiana were released late Friday. The Indiana case was in a man who worked with pigs. A separate release revealed details of the Wisconsin case, which involved a new H1N1 virus with genes from avian, swine and human flu viruses.

The case accounts were contained in a report that revealed that international influenza science partners have agreed to a new name for these viruses, one that drops the constant reference to the viruses' swine origin.

The agricultural sector objected loudly in the early days of the 2009 pandemic when human health officials referred to the new virus as a swine influenza virus. Pork sales plummeted and the industry has been worried the same could happen again with new reports of human infections with swine flu viruses.

The World Health Organization and the UN's Food and Agriculture Organization have agreed to call these viruses "H3N2 variants" or H3N2v for short. The new H1N1 virus -- which has been circulating in pigs since last year -- will be similarly called H1N1v.

The H3N2v viruses are hybrids of a swine influenza virus that has been circulating for more than a decade in pigs. That virus has acquired an internal gene -- the M gene -- from the H1N1 virus that caused the 2009 pandemic. Studies have shown that gene appears to make viruses that contain it more transmissible among guinea pigs, a model that is used to predict how flu behaves in humans.

The virus from the H1N1v case in Wisconsin also contains the M gene from the 2009 pandemic virus.

Cases of human infection with the variant H3N2 virus have been seen in Indiana, Pennsylvania, Iowa, Maine and West Virginia. Most have been in children younger than 10 and none of the cases has died.

Six of the 12 had exposure to pigs but in the other six, no contact with swine could be found. The CDC has said it believes some of these cases are the result of human-to-human spread, but suggests spread among people is probably still limited at this point.

"It's not clear yet that these viruses have acquired the ability to circulate in humans in a sustained way. We certainly haven't seen that in the outbreaks that we've investigated" Bresee said.

But the report on the case in West Virginia suggests there may have been quite a few more cases there. And surveillance in the area and the adjacent communities of Maryland has been ramped up.

Furthermore, multiple contacts of the two children -- including other children in the daycare -- were reported to have had respiratory illnesses in the period when the cases occurred, though most were not tested for flu.

This H3N2v virus is a distant cousin of the virus by the same name that circulates among humans. Testing conducted at the CDC suggests the virus is most closely related to human H3N2 viruses that circulated in the early 1990s, which suggests many people over age 20 may have some antibodies that would respond to the variant virus.

Flu experts are watching the situation with concern, though not alarm at this point. What path the virus will take remains unclear: it could peter out, continue to circulate at low levels, mainly in young children, or spread more broadly.

Most experts don't believe it could cause a pandemic, given the amount of immunity the human population has to human H3N2 viruses.

But they worry it might be able to seed itself in humans enough to continue to spread, potentially creating a situation where there might be three families of circulating influenza A viruses: the H1N1s, the human H3N2s and these variant H3N2s.

If it appeared the viruses were causing enough disease to warrant including them in the annual flu strain "that will be a mess," said Adolfo Garcia-Sastre, an influenza researcher at New York's Mount Sinai Hospital.

"If they jump into humans, I don't think it will be a big public health nightmare," Garcia-Sastre said. "But I think what it could do is it may be able to establish a second lineage of H3s. And that will make it very difficult to handle, from the point of view of the vaccine."