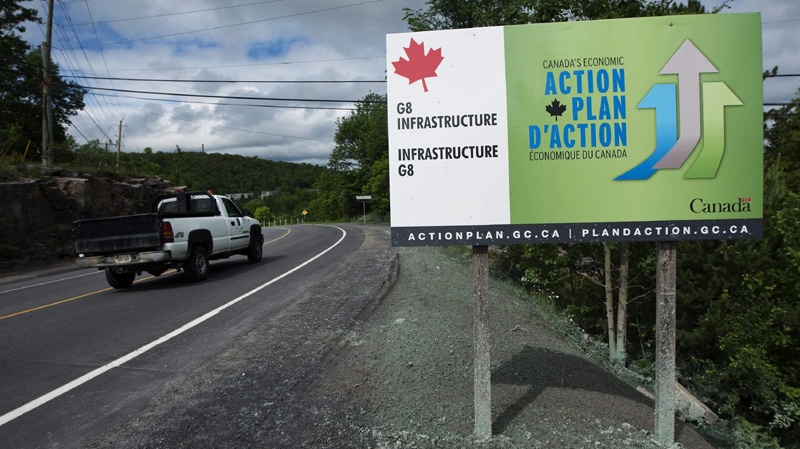 A photograph of the G8 action plan sign put up by the government of Canada as a three-metre high steel fence is being assembled around the Deerhurst resort and golf club in Huntsville Ont., on Saturday, June 5, 2010. (Nathan Denette / THE CANADIAN PRESS)

OTTAWA - Civil servants across Canada were ordered by the Harper government to document every single sign posted anywhere promoting the federal economic stimulus plan, The Canadian Press has learned.

They've spent countless hours tracking every one of more than 8,500 signs posted since last summer, when the urgent, weekly exercise was ordered by the Privy Council Office, the bureaucratic support arm of Prime Minister Stephen Harper's office.

It continues to this day.

The tracking exercise generated thousands of pages of documentation over a six-month period at a single Crown corporation, according to Canada Mortgage and Housing Corporation documents obtained under the access to information law.

The CMHC effort involved everyone from corporation president Karen Kinsley, who signs off on each week's tally, to CMHC field staff spread across Canada.

More than 500 pages of CMHC signage documentation obtained by The Canadian Press -- winnowed down from more than 3,000 pages generated between mid-October 2009 and mid-April 2010 -- include multiple reminders from PCO that the arms-length housing agency's signage report must be submitted "every Monday by noon." The PCO reminders are written in bold face and underlined.

It's an exercise taking place across the federal civil service.

"There are currently 18 departments / agencies reporting on signage," PCO said in an email response to The Canadian Press.

They range from the Canada Food Inspection Agency to Canadian Heritage, the departments of Fisheries and Oceans, Industry, Parks, Public Safety and Natural Resources, and regional diversification agencies in Ontario, Atlantic Canada and Western Canada.

Opposition critics have repeatedly claimed that the Conservative government is using the 2009 budgetary stimulus package -- branded by the Tories as Canada's "Economic Action Plan" -- as an ongoing partisan platform to promote the Harper government.

A Privy Council spokeswoman said the government is simply communicating with Canadians.

"The government of Canada has a responsibility to make sure that Canadians are aware of current programs and initiatives that they can take advantage of under the Economic Action Plan," PCO spokeswoman Carlotta Collins said by email.

"EAP signage not only demonstrates to Canadians that stimulus projects are underway and are helping their communities, but they also provide other relevant information that helps citizens find out about the programs, how they work and who can benefit."

Gerard Kennedy, the Liberal critic on infrastructure spending, said the internal tracking effort is ridiculous, especially since the government hasn't bothered tracking how many jobs were created by the stimulus spending.

"It's outrageous. They will not be accountable for whether Canadians get employed (using stimulus dollars)," fumed Kennedy.

"There's no evidence that they put anywhere near that kind of energy or interest into making sure that there were jobs (created) or that they get good value for these projects."

Kennedy says he has spoken with provincial ministers who told him "the federal government was more interested in the signage and the speaking than they were in the projects themselves."

"This (tracking project) shows almost an obsession with that kind of stuff .... propaganda versus reality: propaganda seems to have won every time with these guys."

NDP MP Paul Dewar, the party's public service critic, called it "scandalous" that a government putting the squeeze on government workers -- including short-staffed food inspectors -- is asking them to track signs.

"The buck stops with the Prime Minister's Office," said Dewar, noting the PCO simply does the prime minister's bidding.

"They're the ones directing this and we've seen this before, where the public service is treated as a mouthpiece for the Conservative government. That's inappropriate."

The CMHC documents do little to dispel the government's critics.

"To ensure maximum visibility, it was decided to install two signs -- one at each entrance of the complex," Anne Dawson, CMHC's then-executive director of communications, explains of one large project.

"Going forward, one sign will be installed at each project, where appropriate."

At one point, CMHC field staff were required to phone every single First Nation band office with an outstanding project in an effort to determine whether signs had been erected, and if not, why.

A Prairie communications co-ordinator for CMHC describes doing "everything in my power" to reach provincial officials to clarify a project list, without success.

He adds that by using tracking systems at Purolator and Canada Post he has confirmed signs were delivered to a number of Yukon communities. But "I cannot reach our contact in Carcross (Yukon) or Teslin Tliglit that it has been installed, and while it was confirmed that Taku received their sign it has since gone MIA and the proponent is trying to locate it in their office."

There are also explanatory notes why signs had not been installed immediately on some projects.

Those reasons range from the practical -- lack of sign installers, frozen ground, inability to get installers to remote native communities -- to the political.

"The gap between the number of signs remaining to be installed and signs ordered is due to the ongoing negotiations between the Governments of Canada, Ontario and Manitoba on CEAP (Canada Economic Action Plan) templates and CEAP signage," says the weekly report from March 29, 2010.

However provincial sources say Ottawa was adamant from the beginning that federal signs would not share space with provincial messaging, and that by June of last year the feds were going ahead with sign installations.

While Newfoundland and Labrador had agreed as of last March on the look of the signs, an internal CMHC email reveals "there is an outstanding issue pertaining to the order of precedence (who gets to speak first at events and who gets quoted first in news releases)."

Ottawa also butted heads with VANOC, the Winter Games organizing committee, over the placement of signs in Vancouver.

"The sign for Russell Housing Centre in New Westminster, B.C., is outstanding due (to) issues around the Olympics," says the Mar. 29, 2010 report.

And CMHC officials also felt compelled to explain why signs were inappropriate in some situations: "This is a shelter for women who are victims of family violence .... For safety reasons no signage is planned for this location."

CMHC did not respond to inquiries about the overall cost of the tracking exercise, nor the number of employees involved.

But the internal correspondence does give a hint as to the cost of the signage program.

In response to a PCO request last November, CMHC listed the average cost of each sign -- "without shipping and installation."