The Finals are set: LeBron, Lakers will meet Butler, Heat 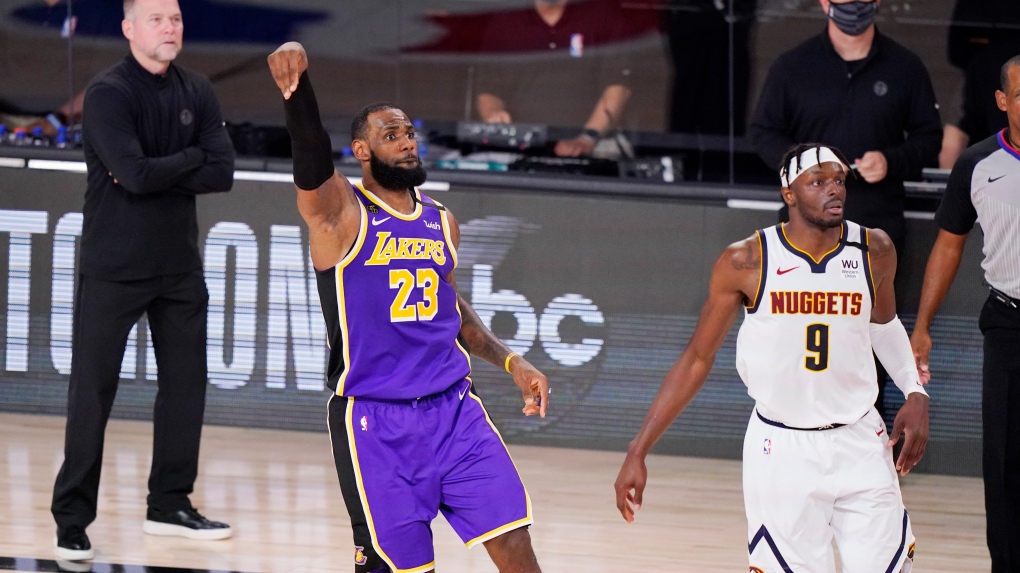 Pat Riley vs. the Lakers.

The matchup is set, with the Miami Heat and the Los Angeles Lakers emerging as the last two teams standing in the chase to be crowned champions of the most tumultuous season in NBA history. The Heat won the Eastern Conference title Sunday night, finishing off Boston a day after the Lakers won the Western Conference crown.

So, for the first time - well, excluding the league's inaugural season - two franchises that missed the playoffs the previous season will meet in the NBA Finals. Game 1 of Heat-Lakers is Wednesday night at Walt Disney World.

“We know why I came here,” said Lakers All-Star forward Anthony Davis, whose first finals trip comes in his first L.A. season. “We want to win a championship. We're four wins away, a step closer to our goal.”

James is bidding for a fourth NBA championship, as well as a title with a third different franchise - and he's about to become the first player to win a Finals MVP award with one team and then face that same team in a future championship series. His first two titles were with Miami in 2012 and 2013, the highlights of a four-year stint with the Heat that ended in 2014.

That, not coincidentally, was the last time the Heat had reached this stage. James left to return to Cleveland earlier than the Heat figured he would, Chris Bosh began his fight with blood clots - a condition that ended his career - not too long afterward and Miami descended from magnificent to mediocre in a hurry.

No more. With a young core led by Bam Adebayo and Tyler Herro, the veteran savvy of Goran Dragic and the addition a year ago of Jimmy Butler the Heat got back to title contention quicker than probably anyone envisioned, themselves included.

Then again, Riley - who won four championships in a seven-year span as coach of the “Showtime” Lakers - isn't known for patience.

He thinks big. That's why he and the Heat landed James and Bosh to play with Dwyane Wade in 2010. That's why they got Butler in 2019, even when the team had no free-agent money to spend. That's why they swung a deal to add Andre Iguodala, Jae Crowder and Solomon Hill in February, trading them for Justise Winslow, James Johnson and Dion Waiters; Waiters, oddly enough, ended up with the Lakers and will now face the Heat in this title series.

“To fit in here, you've just got to care about winning,” Butler said earlier in this playoff run. “That's the No. 1 thing. Trying to win a championship. And we've got a group of guys that want that, night-in, night-out, every single day. There's only one goal in our mind, and that's to win it.”

The Lakers have that same goal, of course.

Their motto in these playoffs has been “Leave A Legacy,” a nod to the great Kobe Bryant - the Lakers legend who died, along with his daughter Gianna and seven others, in a helicopter crash on Jan. 26. The last Lakers' championship was in 2010, when Bryant got his fifth and last title. James has been in the finals every year but once since. There never was a LeBron vs. Kobe finals, to the dismay of many, but in its place comes a finals trip where James and the Lakers will play with Bryant in very much in mind.

To them, in a year where a pandemic halted play on March 11 and the battle against racial inequality and police brutality led to a season that was unprecedented by all possible measures, the only fitting way to end it would be to honour Bryant's memory with the Lakers' 17th world title.

“We definitely know that's what he would want,” Davis said.

There's a respect level that exists between James and the Heat to this day, even though nobody was exactly thrilled to see him leave six years ago. James' return to Miami as an opponent was on Christmas 2014, when the Heat feted him with a tribute video that James deeply appreciated. It's no secret that his number - 6, the one he wore in Miami - will be retired by the Heat one day. James even lauded Heat coach Erik Spoelstra on Saturday night when going through the list of “great coaching staffs” that have guided him over the years.

The feeling is mutual, with Spoelstra tipping his cap Sunday to James' annual excellence.

“It's pretty amazing,” Spoelstra said. “Just the level of greatness over such a sustained period of time. Yeah, that's amazing.”

James is looking for his fourth title. So are the Heat.

They stand four wins away - and in each other's way.