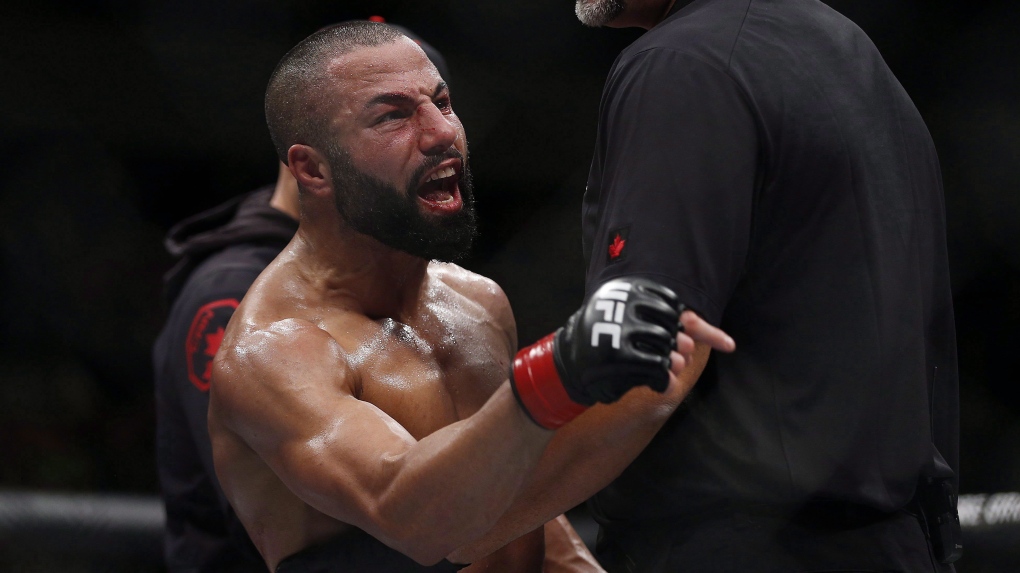 FILE - John (The Bull) Makdessi yells at Abel Trujillo after their preliminary lightweight bout at the UFC Fight Night - Lawler vs Dos Anjos event in Winnipeg on Saturday, December 16, 2017. THE CANADIAN PRESS/John Woods

Makdessi (18-7-0) was taken to hospital after the fight "for precautionary reasons."

The 23-year-old Bahamondes, who moved to the U.S. at 16 to pursue his fighting dream, was making his UFC debut after posting a November win in Dana White's Contender Series. He had won seven of his previous eight fights.

At six foot three, Bahamondes (11-4-0) had a seven-inch height advantage over Makdessi who prepared for the fight at The MMA Lab and several other gyms in Arizona. Former UFC and WEC lightweight champion Benson Henderson was in his corner.

Bahamondes missed weight, tipping the scales at 156.75 -- just over the 156-pound non-title limit for lightweights. He forfeited 20 per cent of his purse to Makdessi.

After a good start, Bahamondes was hurt midway through the round when Makdessi clipped him with a left to the head. Makdessi punished him at the fence with a powerful right, forcing Bahamondes to reach for a clinch. Makdessi kept coming, cutting Bahamondes under the right eye.

Makdessi scored with his jab as both fighters connected with strikes in the second round. Bahamondes also found his range, with Makdessi's face showing damage.

Both fighters did damage in the third round, taking their lumps and punching back.

Makdessi had not fought since March 2020 when he lost by unanimous decision to Francisco Trinaldo. He subsequently underwent knee surgery to repair his anterior cruciate ligament.

In the main event at the UFC's Apex production facility, Marvin (The Italian Dream) Vettori used his superior grappling skills to take Kevin (Trailblazer) Holland down a record 11 times en route to a unanimous 50-44 decision. It was Vettori's fifth straight win.

This report by The Canadian Press was first published April 10, 2021