Some fans allowed in stadiums when Russian soccer returns 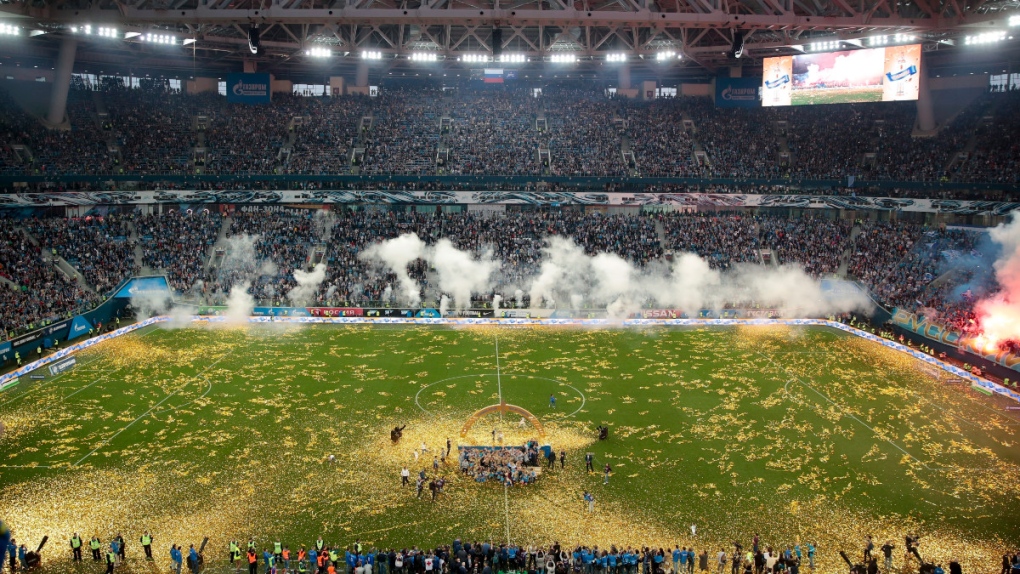 Fans cheer after a Russian premier league soccer match between CSKA Moscow and Zenit in St. Petersburg on May 12, 2019. (Denis Tyrin / AP)

MOSCOW -- Fans will be allowed in the stadiums when the Russian soccer league restarts next month.

Under a plan drawn up by Russian soccer authorities and approved by a state regulatory agency, spectators will be allowed to attend matches if they don't exceed 10% of the stadium's capacity.

The Russian league previously announced it will resume games on June 21.

"Both players and fans have missed the vivid emotions of a match and the noise from the stands. Soon all this will return," Deputy Prime Minister Dmitry Chernyshenko said Thursday in a statement on the website of the national coronavirus task force.

Neighbouring Belarus is the only European country currently holding professional soccer games with fans in the stadium. Fans there have had their temperature taken at the entrance to the stadium and are asked to sit separately. However, many ignore the seating instructions and gather in large groups.

Hungarian clubs were given clearance this week to hold games with a limited number of fans under strict conditions.

There was no word on what regulations would apply to the fans allowed into Russian stadiums or how the limited number of tickets would be allocated.

Russian players and coaches have been undergoing coronavirus testing in recent weeks ahead of a gradual return to training. Positive tests came from people at several of the 16 clubs in the top division.

Russian President Vladimir Putin has encouraged regional officials to gradually lift some coronavirus-related restrictions and said Tuesday that "according to specialists," the country has passed the peak of the outbreak.