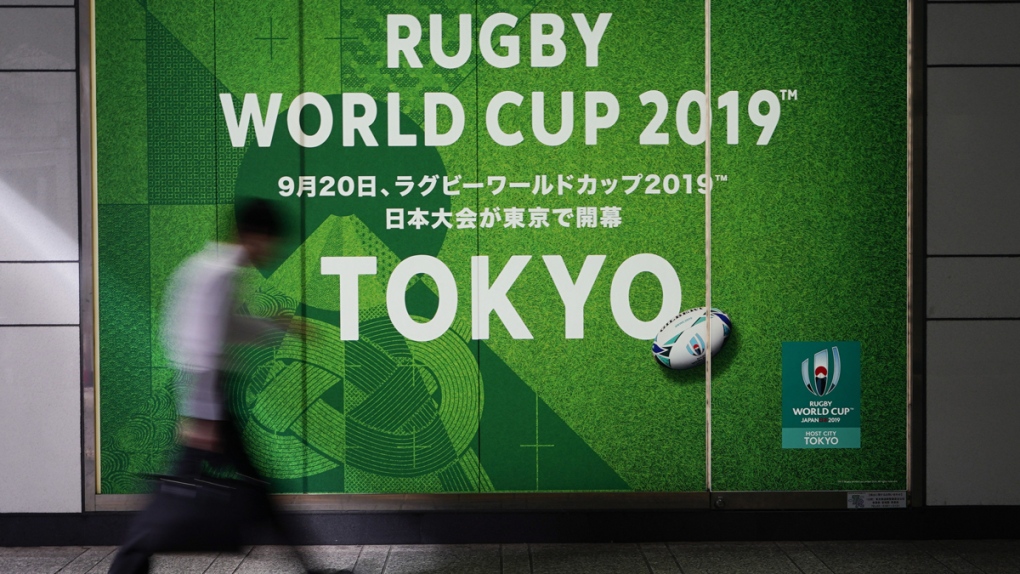 TOKYO -- The powerful typhoon that has caused the first ever cancellation of Rugby World Cup games has ended Italy's prospects of reaching the quarterfinals and could also upset Scotland's chances of progressing to the knockout stages.

Rugby World Cup organizers on Thursday announced that two games scheduled for Saturday -- the Pool C decider between England and France in Yokohama and the Pool B game between defending champion New Zealand and Italy in the city of Toyota -- had been cancelled because of the anticipated impact of Typhoon Hagibis.

Organizers will leave a decision until Sunday on the Japan-Scotland match at Yokohama, which is scheduled to conclude the group stage later that night. Rugby World Cup said no matches would be postponed or rescheduled.

The Japan Meteorological Agency is warning the typhoon may bring torrential rain and strong winds to central parts of the country between Saturday and Sunday, coinciding with the last round of World Cup group games. It has urged people to take precautions to avoid potentially life-threatening danger. Airlines and train services anticipate cancellations in what is expected to be the most destructive typhoon of 2019.

World Rugby tournament director Alan Gilpin said organizers had looked at all options, including moving the Yokohama and Toyota games to other venues, but it wasn't logistically possible.

"While making every effort to put in place a contingency plan that would enable all of Saturday's matches to be played, it would be grossly irresponsible to leave teams, fans, volunteers ... exposed during what is predicted to be a severe typhoon, Gilpin said. "We've taken the very difficult decision but right decision to cancel matches in affected areas.

"We don't think it undermines (the quarterfinals) at all," he told a news conference.

All games cancelled because of weather are logged as scoreless draws and each team will get two competition points, meaning Italy cannot finish better than third behind New Zealand and South Africa in Pool B, and England will top Pool C without having to play France, despite both teams being unbeaten. Scotland needs to beat Japan to have any chance of reaching the playoffs. If the game is cancelled, Japan will advance to the quarterfinals for the first time along with Ireland.

It was difficult news for Italy to accept.

"I'm finding it really difficult and I saw the players' reaction after training and it was horrible because these guys have given their lives to Italian rugby and their World Cup has ended on the training pitch, when it should be on the playing field," Italy coach Conor O'Shea said. "For the World Cup not to finish in front of the fans on the pitch, in front of the fans watching on TV in Italy, it is a hard day for all of us and difficult to put into words.

"All the other teams whose matches have been cancelled are already through."

The Scotland team issued a statement saying it was working to ensure the game against Japan goes ahead. Scotland ended Japan's chances of reaching the quarterfinals in 2015.

"Scottish Rugby fully expects contingency plans to be put in place to enable Scotland to contest for a place in the quarterfinals on the pitch, and will be flexible to accommodate this," the statement said.

Gilpin said all 20 teams were aware of the cancellation policies well before the World Cup kicked off, so he wasn't expecting any protests or legal comeback from teams deprived of games.

"All the teams signed up to the participation agreement. They're well aware of the tournament rules," Gilpin told a news conference.

"We always knew there would be risks (with the weather) but it's rare for there to be a typhoon of this size at this stage of the year. We have no regrets."

All fans with tickets for a cancelled match will receive a full refund.

England coach Eddie Jones said he no problems with the tournament decision.

"Of course everyone is disappointed. We wanted to play France and we put a lot of work into that," he said. "We have no issues, so we're getting on with it."

Friday's Pool D game between Australia and Georgia at Shizuoka and Saturday's game between Ireland and Samoa at Fukuoka will go ahead as scheduled.

Organizers said the logistics of moving 20 teams around a dozen cities and the geography involved diminished the possibility of last-minute changes to venues.

"There's little flexibility, and that's why the tournament rules are as they are," Gilpin said. "We've got some different opportunities if we have similar impacts in the knockout phase."

New Zealand coach Steve Hansen said the cancellation of the All Blacks' last game was a "a no-brainer."

"When you get a typhoon to the level we're getting, then safety is the paramount thing," Hansen said. "The most important thing that happens now is how we adapt and adjust to it."

Typhoon Hagibis had winds gusting up to 270 kilometres per hour (168 mph) Thursday morning. It is expected to weaken over cooler waters as it nears Japan's main island.