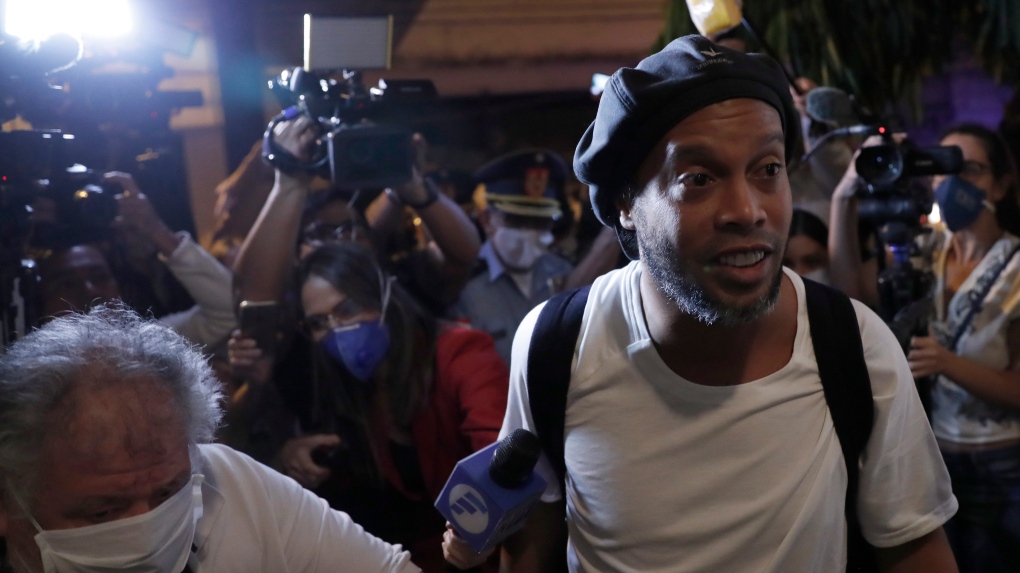 Surrounded by the media, former Brazilian soccer star Ronaldinho arrives at a hotel where he is to stay under house arrest in Asuncion, Paraguay, Tuesday, April 7, 2020. Ronaldinho and his brother Roberto De Assis Moreira spent a month in jail accused of entering Paraguay with fake passports. (AP Photo/Jorge Saenz)

ASUNCION, PARAGUAY -- Retired soccer star Ronaldinho was released from a high-security jail in Paraguay on Tuesday after more than a month, but was ordered to serve house arrest at a luxury hotel while he's investigated for using a false passport to enter the country.

The Brazilian entered the hotel about four hours after the ruling. He was transported in a police van and was allowed in after sanitary precautions due to the new coronavirus outbreak.

Ronaldinho, the Brazilian former FIFA player of the year, and his brother Roberto de Assis were also told to pay bail of $800,000 each.

Ronaldinho, who helped lead Brazil to the 2002 World Cup title, was jailed on March 6 after entering the small South American country with a false Paraguayan passport. He told local authorities in a hearing that the document was a gift from a Brazilian businessman, Wilmondes Sousa Liria, who was also jailed.

"I decided to put them in house arrest because the investigation is now well advanced, differently from the situation one month ago," Judge Gustavo Amarilla said when issuing the ruling.

Ronaldinho had his Brazilian passport seized at home due to an investigation into alleged environmental crimes, but the document was returned to him in September. One month later he played in a friendly in Israel.

If convicted, the former Barcelona star could spend up to five years in jail. Fourteen people are being investigated in the case.

Attorney Sergio Queiroz told The Associated Press that Ronaldinho and his brother will not make public statements until the case is closed.

Ronaldinho came to Paraguay to promote his autobiography. He was jailed in an improvised penitentiary in the south of Asuncion, which is used for 150 dangerous criminals, including convicts of drug dealing, corruption and rape.

During his stay he played soccer with inmates and took pictures with them that were shared on social media.