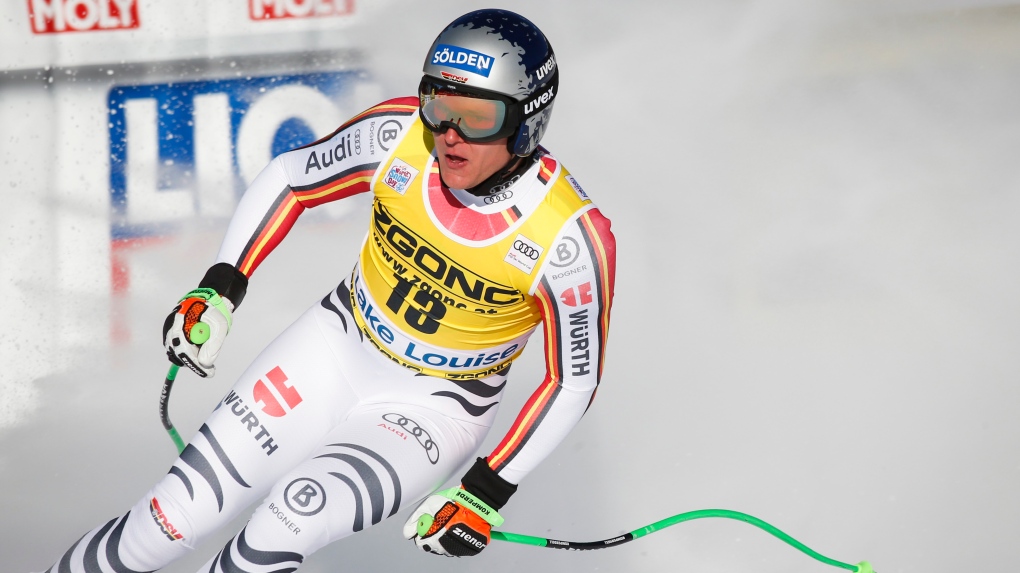 The 26-year-old German won the season-opening men's World Cup downhill Saturday in his first race in almost a year.

Dressen tore ligaments in his knee and dislocated his left shoulder crashing in last year's downhill in Beaver Creek, Colo.

A year minus a day after he was carried off that mountain on a stretcher, Dressen stood atop the podium in Lake Louise, Alta.

"I was away for a whole year and during the year all the other guys made huge steps," Dressen told The Canadian Press.

"To be honest, some days ago somebody asked me 'what's your target for the race in Lake Louise?' I said 'I hope I can score points."'

Ben Thomson of Invermere, B.C., battled both the course and a sore left knee. He crossed the line almost two seconds back of Dressen in a three-way tie for 30th as the top Canadian.

The 32-year-old was limping after the race. Thomsen wondered aloud if he would able to race Sunday's super-G.

"It's not good," Thomsen admitted. "We'll see. I'm going to prep and get ready for it, but it was pretty painful today. I don't think I let that bother me with my run, but it's hard to say if it did or not.

Coming off a breakout 2017-18 season featuring downhill wins in both Kitzbuhel, Austria, and Kvitfjell, Norway, Dressen placed seventh in Lake Louise to start last season before his wreck in Colorado.

"To be honest, this whole season, it doesn't matter what comes," the German said. "I agreed with the coaches it's going to be a comeback season.

"It's not that much about results. Just to get back to where I was. I think it's pretty good right now. Right now, I just try to stay calm and enjoy the moment."

He was quicker over the final flats than Paris, who claimed last year's overall World Cup super-G title.

"He's coming off a knee injury, but I saw him yesterday in the second training run. He was doing well and was fast in the bottom."

Janka, who was the quickest in two training runs, posted the day's top speed of 126.54 kilometres per hour in cold, calm and sunny conditions.

"My pre-season was not that good," Janka said. "I didn't ski much because of my back. Going well in this week with the two trainings. Confidence is going up and with the (ski) set-up, it worked well this week."

Toronto's Jack Crawford was 57th. Vancouver's Sam Mulligan slid into the safety nets on the bottom section of the course and did not finish.

The women's downhill season also starts in Lake Louise next with back-to-back races Friday and Saturday and a super-G on Sunday.

This report by The Canadian Press was first published Nov. 30, 2019.